Q: Something that strikes me about Two Wolves is how visual it is.  I know you’ve been an actor and a filmmaker, and I wondered if for you the image comes before the word, particularly with this book…

The first few drafts are very grey and sketchy for me, without much detail. The characters are wafer-thin and I’m feeling my way through darkness. On about a fourth draft I start to understand the characters, the voice becomes more consistent and I have spent enough time in the locations to be able to paint them in greater detail. So draft 4-7 is when the visual detail comes in.

A: Was it hard to imagine the character of Ben, who is a bit of an outcast, and isn’t very happy in the great outdoors – how did Ben ‘find’ you?

Well, I certainly I wasn’t kidnapped by my parents and taken on the run so I needed to build aspects of myself into Ben in order to write him honestly. I wrote an early draft using the character name ‘Tristan’. That helped. Ben became a filmmaker, making a movie called Within the Woods which is the name of a film I made with friends as a teenager. He’s an observer, an over-thinker and amateur philosopher like me. I think his weight issues grew out of the idea of him carrying baggage from the way that he has been parented. He leads a very suburban existence, loves the great indoors, is mostly involved in passive pursuits and he eats a lot of junk food. All of these are the opposite of his life once he and Olive are out in the wild. 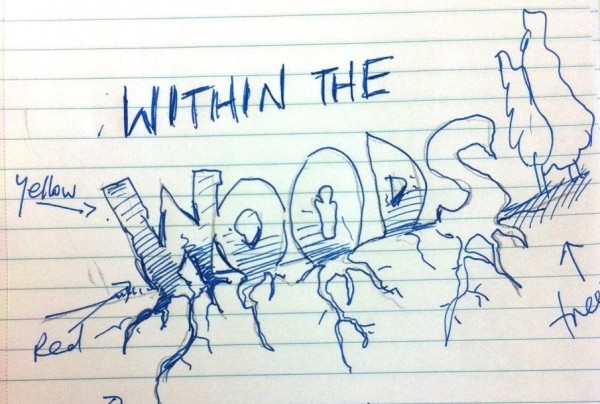 Q: The parents in this book, particularly the father of course, are truly dreadful.  Was it hard as a parent to write about ‘bad’ parents?

Not really. I think the depiction of parents in children’s books is often too kind (although not so much in YA). In real life, adults make mistakes, maybe not as big as the mistake that Ben and Olive’s parents make, but parents are not perfect. They struggle. Kids watch their parents struggle and I don’t want to write parents who have all the answers. In an early draft my son suggested that I make the father a step-father because he does nasty things. I think young readers are used to the idea of step-parents being evil and parents being innately good (if a bit annoying). But it’s more problematic for the child character if the person making mistakes is their flesh and blood. It forces the child character to grow up and to make their own choices, to trust themselves.

Q: When did you think of the idea of Two Wolves?  Was that what prompted the book initially?

The book was initially called Ten Million to One, then it became Flesh and Blood, then The Wreckers and, finally, Two Wolves. I found the ‘Two Wolves’ parable online and realised that I had come across it before. It was initially believed to be Cherokee Native American but now it’s considered to be of unknown origin. I love Australian cartoonist Zen Pencils’ depiction of Two Wolves: zenpencils

Q: How long have you lived up here – and was it the environment that partly prompted the wilderness region in the book?

I’ve lived here for about fifteen years. The wilderness in the book is definitely inspired by ‘them there hills’ behind Byron and also partly the hinterland behind Nerang. I took lots of photos in Wilson’s Creek and the Gold Coast hinterland to build the world of the story. Once I have seen it, I feel I can write it more authentically. I wrote a lot of the book on the beaches around Byron, walking and writing and I recently made a video about this process with my wife, Amber: youtube.com 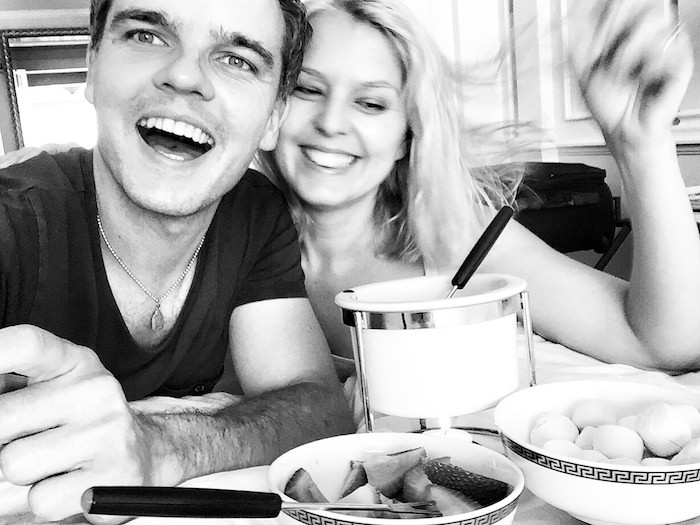 Q: In the book Ben and his little sister don’t have much relationship but then they have to bond because of what’s happening.  One message in the book seems to be that technology can really cause barriers for young people because it cuts them off for real life – is that something you see?

I think it can cause barriers but also create connections. For shy kids, I think the web can make it easier to find a like-minded community. But I certainly feel that when humans are closed off from nature it creates issues. They say that myths are an attempt to bring the human psyche into line with nature. This story and Ben and Olive’s relationship explores that idea. Nature is a powerful force in breaking the two characters down and also in bringing them together, forcing them to realise that great power and the answer to their predicament lies inside them, not out there somewhere. I think nature is a better teacher of this idea than the Apple corporation of Cupertino, California. (Even though I’m their ninth biggest fan.)

Q: Ben has a pivotal moment where he can choose to do right – do you think that’s something teenagers will recognise – that we all come to places where we must make choices?

Hopefully. I definitely don’t see it as a ‘message’ book and I didn’t set out to teach anything but I found that thread in the book and strengthened it in later drafts. One thing that I learned from screenwriting was the old ‘show, don’t tell’ rule. Characters reveal themselves in the choices they make under pressure and humans in the real world reveal themselves in those moments, too. Kids and teenagers are often facing situations for the first time so they’re constantly having to make big choices. That’s why it’s so interesting to write and read about characters transitioning from child to adulthood.

Q: You must be very pleased with the response to Two Wolves – did you expect it would strike such a nerve and win so many prizes?

I am very pleased and I definitely didn’t expect it. I didn’t even know if I had the writing chops to pull off a story like that. It has bigger ideas, richer themes than I’ve wrestled before and I thought I’d either make it too didactic and worthy or too action-adventure and not explore the ideas in sufficient depth. I did feel, once I was five drafts in, that it was the best thing that I had written but that didn’t necessarily mean that anyone else would agree. It took five years and eight or nine drafts to find that line between ideas and engagement. Usually, when I bleed for a project like this, people ignore it and prefer the obviously commercial thing that I turned out more quickly. But this book seems to resonate.

Q: What are you working on now?

I’m always working on funny short stories for the My Life series. They’re like a sorbet between drafts of a novel. They amuse me and each story explores one small idea, which is refreshing when you’re juggling many balls on a longer book. I’m also playing around with another mystery story that explores ideas around mortality for the middle-grade / Two Wolves audience. It started out as a kind of Rear Window for kids but it’s evolving with each draft. I’m really enjoying it. (And it’s driving me crazy.)

Q: How many kids do you and Amber have?

Two boys. I read them bits and pieces of my stories and throw ideas at them over dinner and I can tell right away if the idea engages them. If it doesn’t but I still love it I continue to work on it and, eventually, I win them over once I can explain the idea clearly.

Q: Has Two Wolves been optioned for a film yet?  If not, why don’t you make it?

It hasn’t, but I can really see it as a  film. There’s an agent getting bites on it in the US where the book has just been released as On the Run. It takes so long to get films made that I’m wary of getting too involved in adaptation. I could lose years trying to make it happen and, meanwhile, I wouldn’t be writing and releasing books and developing my readership. I have started to write a Two Wolves screenplay and I love the process (although I think I’m perhaps too respectful to the author’s original work). The book is structured like a film and there’s plenty of outward action. It doesn’t all take place inside a character’s head, so I think it will adapt well. At the moment I’m looking forward to seeing the Jasper Jones film.

You can find out more about Tristan and his work here: tristanbancks.com

The Queensland Theatre Company is bringing its award-winning new musical, Country Song, based on the life of singer Jimmy Little to NORPA at Lismore…