On a recent visit to the Zee Jaipur Literature Festival Jane Camens discovered that its sister event, BookMark, is where the who’s who of the publishing industry gathers…

Given the massive crowds at the Zee Jaipur Literature Festival, India’s and the world’s largest free literary event, its sister event BookMark is a relatively sedate. But, for my money, BookMark is a better investment if you’re an emerging writer.

The Jaipur BookMark Festival, organized by the same crowd who organize the main festival, is held on the lawns of the Narain Niwas Palace. This is an upscale heritage hotel built in the 1920s in an Anglo-Indian style. It’s only a 10-15 drive from the lovely Diggi Palace where the main festival is held, but it’s a world away in atmosphere.

Some people, when they realized this wasn’t where they were going to see the festival’s superstars —Margaret Atwood, Steven Fry and the pantheon of other greats—turned tail and headed away.

But BookMark, which was held only for the second year, is where the who’s who of the worlds publishing industry gathered. This is where you could meet publishers, literary agents, literary event organisers, and other heavy hitters who are the faces behind the books we read.

The event was opened by the chairman of Penguin Random House (new York), John Makinsons, who a couple of nights later hosted a Who’s Who in the Publishing Industry cocktail party, at the fabulous Rambagh Palace, now a super-luxurious Taj hotel. Yes, Jaipur is full of fabulous palaces.

Because the numbers were relatively low at BookMark, I asked festival director Neeta Gupta whether the event is open for general participation. To me, this is an ideal time and place for the festival to host publisher/agent pitching events, one-on-one consultations with industry professional, and other events that enable emerging authors to take advantage of the talent.

“BookMark is indeed open for general participation,’ Neeta assured me. “But, given the exclusivity of the heritage venue where we host the event, we didn’t see much general footfall this year. I hope to change that in the coming year.” 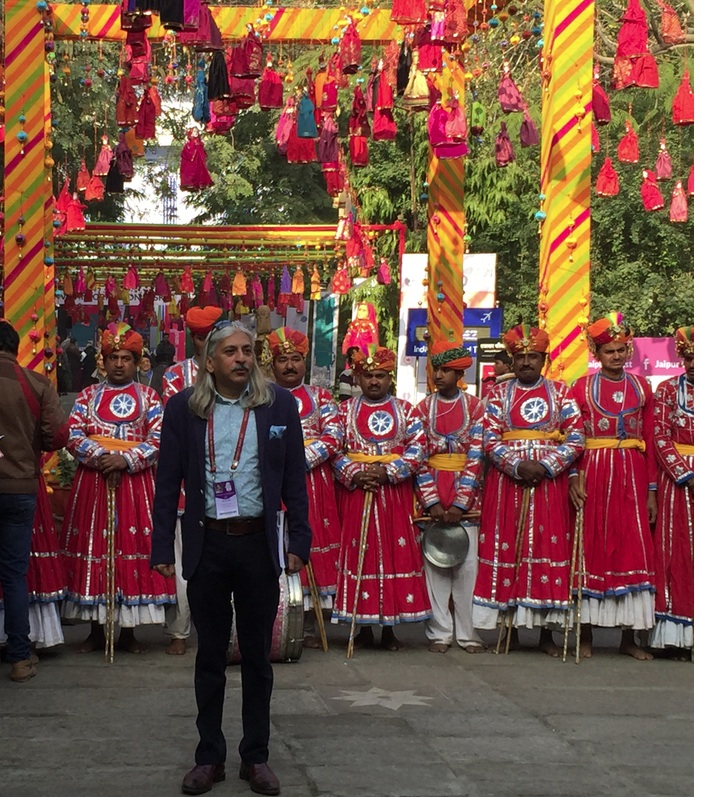 Sanjoy Roy, Festival Producer (of both the Zee Jaipur Literature Festival and Jaipur BookMark) greeting guests on day one.

If you’re thinking of heading to the Zee Jaipur Literature Festival in the future, and if you’re already involved in the publishing industry, you can buy a ticket that includes BookMark, including lunches and dinners. Or you can by a BookMark registration only, which includes lunch on the lawns of the Narain Niwas Palace and dinner at Clarks Hotel with the other festival delegates. Participation for students and ‘aspiring authors’ is free. Or it was this year. “I would love to host a workshop with emerging writers and agents,” said Neeta.

So, there you have it. Opportunity awaits. Finding a publisher who will give you a profile in the Asian market is the way of the future. Asia boasts the world’s fastest growing middle class. Asia is where tomorrow’s readers will be.

Jane Camens, founder of Asia Pacific Writers & Translators Inc (APWT), was hosted to India by the Australia-India Council in her capacity as co-editor of ‘New Asia Now’, issue 49 of Griffith Review.  Jane joined a group of Australian publishers and literary festival organisers on an Indian Exploratory hosted by the Australia Council for the Arts.

“I love this beautiful and massive ball of roze quartz which sits in the middle of the Crystal Castle courtyard,” says Candida Baker, “I…