Robert Drewe wonders why it is his flight experiences are so different to those of Jen, Nicole and Naomi.  Rather than flat beds and champagne, he’s left to tussle it out with  the Victorian Cage-Fighting Championship participants…

Ah, airline TV commercials: has there ever been a greater gap between fantasy and reality? Why is it that when Nicole Kidman takes to the skies she has a range of M-rated sensual experiences that always elude me when I catch a plane?

As Nicole says, “Why just improve on what’s been done before when you can totally re-imagine it?” (I’m in the word business but I have no idea what that means.) Clearly, Etihad has Nicole’s hormones racing. One minute she’s reading a serious-looking leather-bound book, the next she’s reimagining something pretty exciting: her high heels are off, she’s sipping champagne and stretched out languidly on a bed.

Naomi Watts, on British Airways, and Jennifer Aniston, on Emirates, also seem to be having a luxurious time, though as Jen was paid $7 million to make her commercial I guess she’d be smiling even if she was flying Jetstar and shelling out for a bottle of water and an egg and lettuce sandwich. 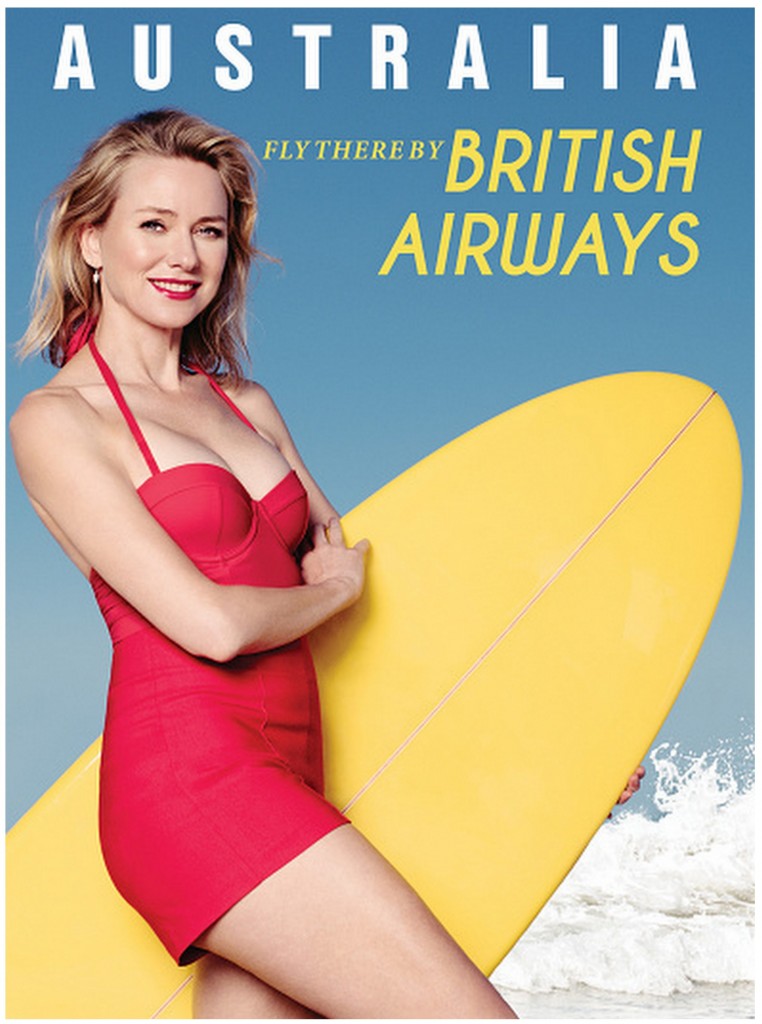 Closer to home, if not to reality, our local AFL coaches enjoyed Nicole-style comfort on Virgin — at least until their finals’ results. Take Adam Simpson. As his commercial declared: “The eyes of a State follow Adam’s every move, and so ‘The Business’ provides him a private environment to collect his thoughts and a luxurious fully flat bed to rest and recharge.”

As for Ross Lyon: “As a coach based in the West, Ross is constantly on the road. ‘The Business’ provides him an office in the sky to get the job done.”

But I thought Ross didn’t look too happy in his ads. Maybe he was looking into the future, or perhaps he was just cross at the lack of prepositions (the absence of the word “with”) in his and Adam’s commercials.

One hesitates to compare one’s life with the glamorous one of a film star or football coach but lately my airline experiences have differed somewhat from Nicole’s, Jen’s and Naomi’s, and even from Ross’s and Adam’s.

A recent Virgin flight, delayed for two hours at Sydney airport, eventually took off for Ballina after we’d sat on the tarmac for another two. Then the pilot thought he’d struck a bird, so we diverted to Coolangatta, Queensland, where we remained seated for another two hours while the engineers checked for feathers and beaks, before taking off again for Ballina. Understandable delays in this case, but the usual one-hour flight eventually took eight hours.

Our first experience of Melbourne’s just-opened Terminal 4 a week later, however, made the bird-strike flight seem Kidman-esque by comparison. Would-be Jetstar passengers to Melbourne take note: wear your walking shoes and have a fitness check before departure. This is an elongated, separate terminal at Tullamarine, a distance from the taxi rank. There are no chairs, shops or toilets once you’ve begun the long walk to the gates.

There are no travelators. To celebrate Terminal 4’s opening, however, there were orange and white balloons, an attendant handing out toffees, and an abject clown who left, chagrined, when exhausted travellers made sarcastic remarks.

Again, there was a one-hour delayed boarding, again a two-hour, belted-up hiatus on the tarmac, then an announcement that the plane wasn’t up to actually flying. So the 10 a.m. flight (after the requested 8 a.m. arrival) was postponed to 4.30, then 5.30, and eventually at 6 p.m. we took off. Well, we taxied back and forth, before really taking off at 6.30. Not quite business class…

But as a keen observer of the human condition I wouldn’t have missed that ten hours at the bar for anything. Take the interesting change in demeanour of the travelling soccer team, for example; and of the 20 Italian co-ed school-leavers, and especially of the Victorian Cage-Fighting Championship participants when they spotted the three platinum blondes in hot pants.

Not to mention the growing agitation of the best man and guests whose appearance at a Byron Bay beach wedding became less likely as the day unfolded. They weren’t going to be mollified by an $8 food voucher, especially one which couldn’t be used for alcohol.

Eventually our afternoon dissolved into a competition to spot the most extreme T-shirts. My choices were worn by an elderly biker (a naked-breasted woman sucking a bottle over the slogan DIRTY), and a pale, thin, bespectacled guy whose shirt said INSPIRED.

Then the winner hove into sight. Another fat, ageing rebel, scowling and hoeing into a tray of Krispy Kreme doughnuts. His shirt announced: “If You Don’t Like My Attitude Dial 1800 EAT SHIT!”

Like Nicole, I was doing a lot of re-imagining. And 12 hours after we set off (interestingly, you can fly from Perth to Capetown in 11 hours) we were home.

Alex Clarke nabbed Verandah Magazine’s Shot of the Week, which officially marks the beginning of the festive season, with this great photo of Lismore’s…