Remember the days when Scout Halls actually held Scout meeetings, not to mention cub, guides and brownies and their accompanying elves, and fairies…Robert Drewe tells all.

According to its own annual reports, Australia-wide scouting membership has dropped from 84,502 in 2001, to 65,810 in 2010. I’m guessing Lord Baden-Powell didn’t foresee his empire taken over by yoga mothers pulling up outside in their four-wheel drives. Nor, for that matter, sacredly-sexual New Age chaps. (There will be no bad-taste scoutmaster jokes here.)

Across the suburbs and towns of Australia, symbolising a time when it was considered “a good thing” for children to keep busy and take part in community youth activities, ghostly scout halls stand empty — or are used very differently.

To the bewildered amusement of my 15-year-old, we were discussing that era the other day. Prise a teenager from her iPad to discuss Akela and Brown Owl and two-finger salutes and see the reaction you get.

The woman of the house had her in stitches with her brownie reminiscences. She’d joined brownies on the misunderstanding she’d be doing adventurous tomboy things every Saturday: making campfires, sleeping in tents, tying knots and whittling sticks with knives.

“Instead, I had a badge with an elf on it. We had to be either elves, gnomes, imps, sprites, leprechauns or fairies. Depending on your emblem, we danced around imaginary toadstools, singing. We are the Irish leprechauns/Guiding strangers when forlorn.” And, Here we are, the sprightly sprites/Brave and helpful like the knights.

All very commendable. Alas, the fairies’ song, We’re the fairies glad and gay, helping others every day, was dropped in the 1990s, as were the fairies themselves.

In the 1960s every brownie meeting used to begin with them reciting the Brownie Promise: I promise to do my best; to do my duty to God and the Queen; to help other people every day, especially those at home. The Brownie Law demanded: The Brownie gives in to the older folk, the Brownie does not give in to herself. The Brownie motto was Lend A Hand.

Her particular Brown Owl was an elderly woman who just wanted to sit quietly while the brownies silently sewed buttons and knitted in the corner. 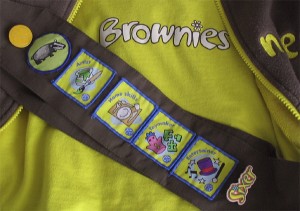 The brownies were great social engineers. “We’d ask Brown Owl if this week could we please make a fire.” No, that’s too dangerous. “We’ve earned all the possible knitting and sewing badges now, could we please pitch a tent or climb something?” No, too dangerous. “Could we do our swimming badge or make something out of wood?” No. “Can we do our first aid badge?” No. “Well, what can we do?” Today we will fold socks and try for the making-a-cup-of-tea badge.

Though there were also badges for sweeping the floor and cleaning (seriously), making a decent cup of tea for an older person was the chief brownie ambition. On the brownies’ 70th anniversary in 1984, they celebrated with a national tea-making competition. Brownies were challenged to make tea for people in as unusual a place as possible. Some venues included an airport fire truck, under the branches of a 300 year old willow tree and on lifeboats.

There was great excitement when the international scout and guide jamboree was held in Perth. “Can we go to the jamboree?” And travel all that way? No.

Scouting was a little different. Helen Townsend’s book Baby Boomers quotes a former scout on the so-called glamour of jamborees: “The jamborees were actually a survival test. It was every man for himself and may the best man win. It was pouring rain and we were huddled miserably in our tent. A bloke poked his head in and said there was hot food up at the mess. There wasn’t, and when we came back our tent was gone.”

He could have done with a nice cup of tea.

Sometimes an idea is so simple, that when it appears before us we can’t imagine why it hasn’t existed before – well, this Sunday…