Alert as ever to examples of quirky human behaviour, my attention has been drawn lately to the new obsession in Thailand for lifelike “angel dolls” that are alleged to bring good fortune to their adult owners.

Known as Luk Thep dolls, the chubby, staring-eyed dolls, the size of real babies and toddlers, are believed by their owners to possess the souls of dead children. Although factory mass-produced, they’re said to have undergone spiritualization by Buddhist monks (who, considering the thousands of the dolls at large, must be working overtime) to breathe life into them.

Their owners believe the dolls bring good luck, wealth and health if you treat them like your own living offspring. You must spoil them, take them on trips and buy them meals and presents, such as jewellery and fashionable clothes and good fortune will follow. Thai celebrities of the radio DJ, soap-opera-star ilk have sung their praises and helped spread the word.

Scholars say the current craze recalls the Kuman Thong (or Golden Child) “divine effigies”: occult fetishes made from roasted still-born foetuses covered in gold leaf, a grim superstition that has lingered since the Ayutthaya period in the 14th century.

At least Kuman Thong relics (called Hong Phrai if they were from female foetuses) were normally kept discreetly hidden as a household or personal divinity. In sharp contrast, the current creepy-looking child angels are cuddled in public, pampered in restaurants, theatres and beauty parlors and given regular passenger seats on airlines.

Where superstition opens the door, capitalism (the dolls cost between $90 and $850) is quick to follow. Bangkok restaurants are running special Child Angel meals at children’s prices. After their owners refused to pack the dolls in their airline luggage, in overhead lockers or under their seats, Thai Smile Airways ruled that dolls with tickets could have window seats, and be served with snacks and drinks, but should not sit in exit rows. They have to buckle up.

Just as I was feeling like a superior Westerner on the Angel Doll matter, I remembered several weeks in the mid-1980s spent desperately trying to hunt down a Cabbage Patch Kid for my daughter. I spent days on the road, driving from store to store. The craze for those odd looking dolls with the squashed faces was at its height and she absolutely had to have one for Christmas. More than that, she craved one. She was not a doll enthusiast but I hadn’t seen her so avid before. (And I haven’t since.)

Aware of the national craze, I shrewdly began looking for a doll in late November. Not nearly soon enough. Smug shop assistants shook their heads at my ignorance and told me that proper doting parents had been on the case since about April.

Not only were there no dolls to be had in the city or suburbs, there were none to be had in the other capital cities either. News reports said desperate parents were fighting in toy shops all over America and Europe. Here, there were no Cabbage Patch Kids left in the entire country! From the sound of things, in the whole world! 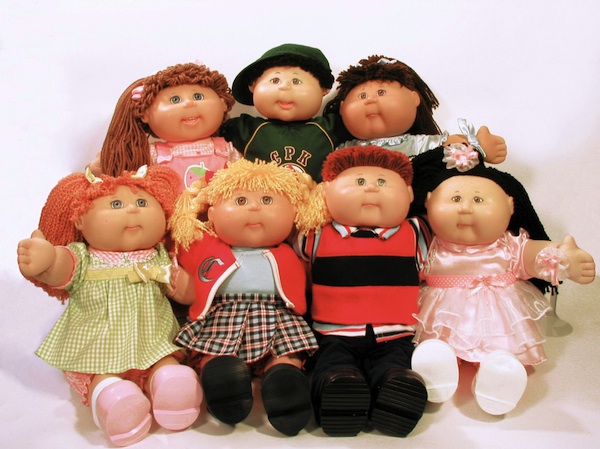 I put my name down on Cabbage Patch adoption sites all over the place, and waited anxiously. And a week before Christmas a new load of the dolls arrived from America. By the time I raced to David Jones there were two left, a boy and a girl. At least that made the choice easy. I filled in the adoption papers and funny-looking, squashy Cecilia Ruth, or Rachel Maria made it in time for Laura’s Christmas.

And the dolls are still around. At the last US election in 2008, there were Cabbage Patch versions of all the Presidential and Vice Presidential candidates, from Barack Obama to Sarah Palin. I look forward to Donald Trump and Hilary Clinton versions later this year.

To celebrate their recent 30th anniversary, a line of vintage dolls “with the nostalgic yarn hair, loveable faces and classic fashions” is currently on sale for $79, the same price as back then. “Share the memory and adopt a Vintage Kid! Comes with iconic baby-fresh scent, adoption papers and birth certificate.”

I asked my daughter the other day what had happened to her Cabbage Patch Kid, the Cecilia or Rachel that took three weeks out of my life. The obsession hadn’t lasted. Without a trace of sentiment, she laughed, “Probably at the bottom of a Salvos bin somewhere.”

Well, no doubt she’ll be experiencing doll fever from another angle in the coming years. She’s just had her first child. And it’s a girl.

Robert Drewe’s latest book, The Beach, an Australian Passion, is published by the National Library of Australia and is available here: the-beach-an-australian-passion His other recent books The Local Wildlife and Swimming to the Moon are on sale here: penguin.com.au