Amelia Telford, Australia’s Young Conservationist of the Year, has been involved with the Youth Climate Coalition since high-school. Her passion for the environment led her to set up the Seed Indigenous Youth Climate Network – Josephine Flynn from HL Magazine caught up with Telford at this year’s Bluesfest.

First Nations music has always been embedded in the program at Bluesfest, however, this year saw the introduction of Boomerang – the global Indigenous arts and culture festival, incorporated into the main festival.  Situated right next to the Jambalaya stage, the program included dance and music performances as well as talks and workshops.  One of the participants was the amazing Amelia Telford.  A Bundjalung woman from Tweed Heads Telford set up the Seed Indigenous Youth Climate Network, seedmob.org.au She has always had a passion for the environment, and noticed there was a disparity in the numbers of Indigenous and Non-Indigenous youth involved with the environmental movement, so she decided to do something about it…

Tell us a little bit about SEED:

The story goes back to the Australian Youth Climate Coalition, the AYCC, which is a large youth environmental organisation.  I started volunteering for them when I was in high-school through the environment group at my school in Lismore.  We heard about a big summit they were running that was bringing together youth from all across the country to Brisbane for a few days to learn more about the issue of climate change and to gain skills in how to take action locally.  It was through that event that I realised that there were all of these people that cared a lot about climate change, but didn’t quite realise the impact that it had specifically on Aboriginal and Torres Strait Islander people.  Not just in terms of the impacts of it, but becuase of the causes of it as well – for example, digging up fossil fuels destroys our country but also our culture.  Our people are the ones that have looked after the land sustainably for tens of thousands of years and it’s so much a part of who we are.  It’s our people that really need to be leading the fight and be a part of the decisions about what goes on in our country as well. Going to that event I noticed there was a real uni student/white privileged vibe going on and I really didn’t feel very connected to the space and noticed there weren’t many other indigenous young people there.  I gave a talk at the event and I was recognised by one of the founders of the AYCC and she became my mentor.  I mentioned my views to her and she was able to support me to start in a role in the organisation as a staff member targeting Aboriginal and Torres Strait Islander People.  Over a year and a half, we recognised that we really needed our own name, our own logo and our own decision making autonomy and that gradually became Seed.  In October in 2014, we held our first summit on climate change for Aboriginal and Torres Strait Islander people.  It brought together 50 young people from across the country to Melbourne for three days and was the first time we could all come together and talk about the issue.  Next month in April, we are holding our next big event.  So two years on we are now bringing together young people from around the country that have been heading their own projects and campaigns in their own communities and are volunteering as members of Seed which is pretty cool. 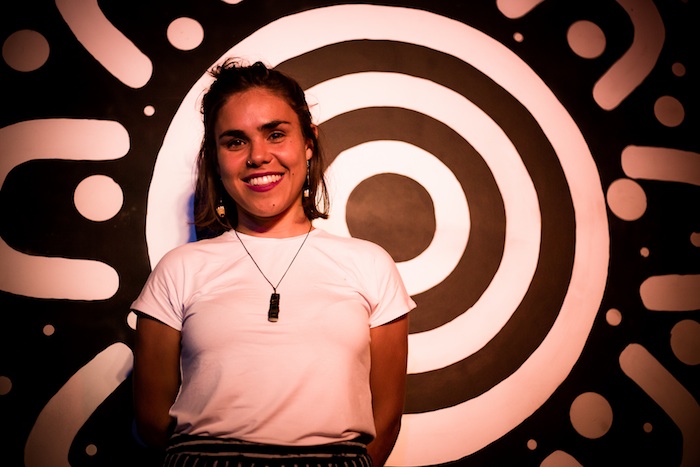 It must have felt very empowering having that idea and seeing it come together and having so many people get on board..

Definitely!  I mean, it’s not as if our people haven’t talked about protecting country or haven’t been a part of looking after this place for thousands of years, it’s just that specifically on the issue of climate change, being able to be a part of a National body that brings people together wasn’t really there and so that’s what we’re trying to do with Seed.

So what campaigns are you working on at the moment?

Our biggest one that we’ve been running for a few years now with AYCC and a lot of other environmental organisations, is to try and protect not only the Great Barrier Reef, but the country and our climate from the proposed coal port expansion up in Queensland. Adani, an Indian coal company are trying to build a new coal mine in central Queensland.  They want to open the Galilee Basin, which is the largest coal reserves in the World.  They currently have plans to build what’s known as the proposed Carmichael coal mine and then build a huge railway line out to the coast, expand the existing coal mine up there and then have about 7000 ships go through the Great Barrier Reef every year.  It’s an extremely destructive project, it’s economically not viable considering that coal is on the decline every year and it would also destroy so much country throughout Queensland.  The impact on climate change if that amount of coal would have if it was burnt, would be just be catastrophic for the community and the planet that we live on.
We’re trying to work with the communities who are fighting it at the moment too, in particular the Wangan and Jagalingou people whose traditional country is right on the sight where the coal mine is proposed.   They’ve been saying no to Adani ever since the first day that is was proposed and they’re fighting really hard to see that this doesn’t go ahead.

There are a lot of environmental issues that happen in Australia that the Government doesn’t want us to know about.  Is there anything that our readers in particular should know if they already don’t?

Yes, I mean there’s a lot!  It’s really important that people do their own research into it and learn about their local Indigenous communities.  Do your own research and don’t always trust what the government or main stream media are telling you.  Look at the community and see what the people are wanting because ultimately everyone can benefit from community-based decisions. The Climate Council are a good source of information, they produce reports all the time that are about different impacts of climate change, such as bush fires, rising sea levels and heat waves.  They talk about the impacts of different industries like coal and gas and how they’re affecting different communities in health, in social interactions, in a whole range of different things and they do it in a way where they really break it down so that everyone can understand.

Did you manage to get out and see anyone at Bluesfest?

Yes definitely!  A highlight was Emma Donovan and the Putbacks, she was incredible.  Another highlight was Uncle Archie Roach, he was just so good!  He was actually talking about protecting country and he had this one great line that was saying that we needed to respect Mother Earth and all this it provides for us and if we don’t do that better soon, she would come and kick us in the moong, which is like, you know, kick us up the bum.  I really agree with that and I think that if we don’t get our act together, it really is a scary thought of what could happen and what is already happening!  I mean we have the beautiful dancers here from the Torres Strait Islands and they know best about how rising sea levels are affecting communities all around the World particularly low lying islands and low lying areas.

For more info go to:
​seedmob.org.au