Irish novelist Evelyn Conlon ponders the power of memory, friendship and synchronicity as she recalls old landscapes from 1973 and new friendships made in Byron Bay.

Imagination is a great emotion, on a par with memory for one of the best free things in life. We know that the second best can be wildly expensive so it behoves us to wallow in the enjoyment of the firsts, when we can remember to do so. It is the combination of both of those things that allows me to write to Bryon Bay from a brisk Dublin day, now stitching its hem up gradually into earlier nights.

I first went to Byron Bay on my way to Brisbane in the early 1970s. I had arrived off a ship like so many before me, in time to be there the night Whitlam was elected. After six months I had now left the large city of Sydney and was wandering northwards in a kitted out Kombi Van, journeying around Australia, or at least a bit of it. This was not as common as we might think, and in those days it still gave rise to suspicious looks in places. I was a passenger in the van, not the driver. But I did hold the old AA strip map and so had control over where we might stop of an evening. As a fiction writer I should lie to you now and tell you that I remember exactly what the place looked like but in truth I don’t. It melded into a group of stunningly beautiful, breathtaking experiences that I was having on that journey. When I dream of it I dream a turn in a long straight road that then brazenly opens out into an aquamarine blast to the eyes.

That’s the picture I had when I got the invitation to read at the 2011 Byron Bay Writers’ Festival (from the publisher of this magazine) all those years later. And I have to admit that I went to look for that bend in the road but couldn’t seem to find it. Never mind, there might be another time. What is astonishing, now that history has had its way, is that I never heard of the Aquarius festival of 1973 and surely we were passing through about then. Gosh if I had, who knows whether Rathmines, Dublin, would ever have become my home?

I was a bit floored by all these memories on my visit there in 2011, and a bit distracted by them, I think, when I got into the shared taxi to the reading venue with a man who was swallowing tablets. He said he needed to take them on time, otherwise he could be in serious trouble and I said that he’d better get on with it because we didn’t want a dead passenger. I was reared in a house surrounded by a clatter of nurses so I can sound deeply unsympathetic to medical emergencies, even when that is not my intention.  I was also wallowing a bit in the joy of the previous night with a houseful of visiting staunch readers, women from all over Australia, come together in a rented house for the festival. 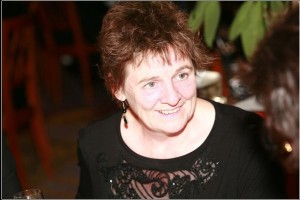 Evelyn Conlon: “I told him we didn’t want a dead passenger.” 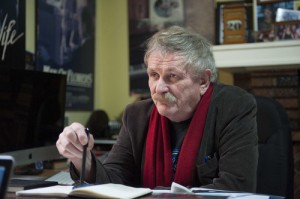 The man turned out to be Paul Cox, filmmaker extraordinaire, and he was on his way to speak at a roundtable discussion about trauma – in his case that of having a liver transplant. There really was a need for him to be taking his tablets on time. I was interested because my own sister was on the list, as those of us who know this parlance call it. (There’s another list in this house, it’s the one to get a flute made by Chris Wilkes and we can talk of that lightly, now that my sister has had her operation and, like Paul Cox, has been given another run at life.)

Paul and I had a great half hour in the green tent before we went to our different tables. I had to do a dash to the airport afterwards, having forgotten to get the man’s full name and address and forgotten to give him mine. But, as is sometimes the way of things, particularly things that happen in spots like Byron Bay, we found each other again. Some months later Paul Cox was speaking to his partner Rosie, or I Gusti Ayu Rus Astini Raka to give Rosie her full name. He’d left a poem out for her – one by Norman MacCaig that I had given him before running to our tables, and he’d mentioned my name. In the library, Rosie took down a purple book, because she loves the colour, and lo and behold it was one by me. We definitely had to be in touch. We’ve been friends since.

Byron Bay is I hope a place I’ll see again. But in the meantime as I sit here, carefully watching a quiet bird – no relation of any of your noisy Australian birds – I can marry imagination and memory and come up with a lovely picture altogether, which will do just as well for the moment.