It’s that time of the year again, where the Easter buzz urges us music lovers to head to Byron Bay for the annual Bluesfest to bask in the good vibrations. This year saw a little controversy, mainly due to the inclusion of hip-hop artist Kendrick Lamar as headliner. But for every person who contested it, a louder voice praised it – and the opening night lineup ended up turning into a spectacular selection of R&B, soul and jazz, with artists like Hiatus Kaiyote, Kamasi Washington and D’Angelo all joining the rapper without a single clash.

Melbourne neo/future soul band Hiatus Kaiyote was the first to grace the MOJO stage on Thursday afternoon, opening with the ever catchy Shaolin Monk Motherfunk from their second studio album, Choose Your Weapon. Their sound works better than ever live and it’s irresistible not to just vibe out. Accompanied by three backup singers, vocalist Nai Palm shone throughout the performance, alongside the ever funky and compelling band mates Paul Bender, Perrin Moss and Simon Mavin. They went on to play a string of favourites, including By Fire, Borderline with my Atoms, the Grammy nominated Breathing Underwater and the Kendrick Lamar-sampled Molasses before finishing with their huge hit Nakamarra, where Nai managed to slip in a quick RIP to recently passed hip-hop legend Phife Dawg.

Soon afterwards, hugely praised jazz saxophonist Kamasi Washington came out on stage, accompanied by eight of his childhood friends and collaborators who featured on his incredbile 2015 record The Epic – including not one, but two drummers. I’ll be honest, I was skeptical at how the three hour masterpiece would come across live, but what ensued blew me away far beyond my expectations. They were sharp and hugely impactful, not to mention gracious in their features; on the second track, Washington stepped aside to give the spotlight to Miles Mosley, his double bass player. The crowd were given the opportunity to listen to the premiere of Mosley’s new track Abraham, accompanied by the full band – expect to hear an official release next month. “I guarantee you ain’t seen nobody play the bass like he can,” Washington crooned. He was right. I stood in awe at the sheer creativeness of the guy; his distorted bass dropped a shockingly funky rhythm, and when Mosley began to sing over it, it became an irresistible tune. Washington then brought out his own father, “the man who taught me everything I know,” Ricky Washington, who tore it up on his flute on a moving ballad with singer Patrice Quinn. 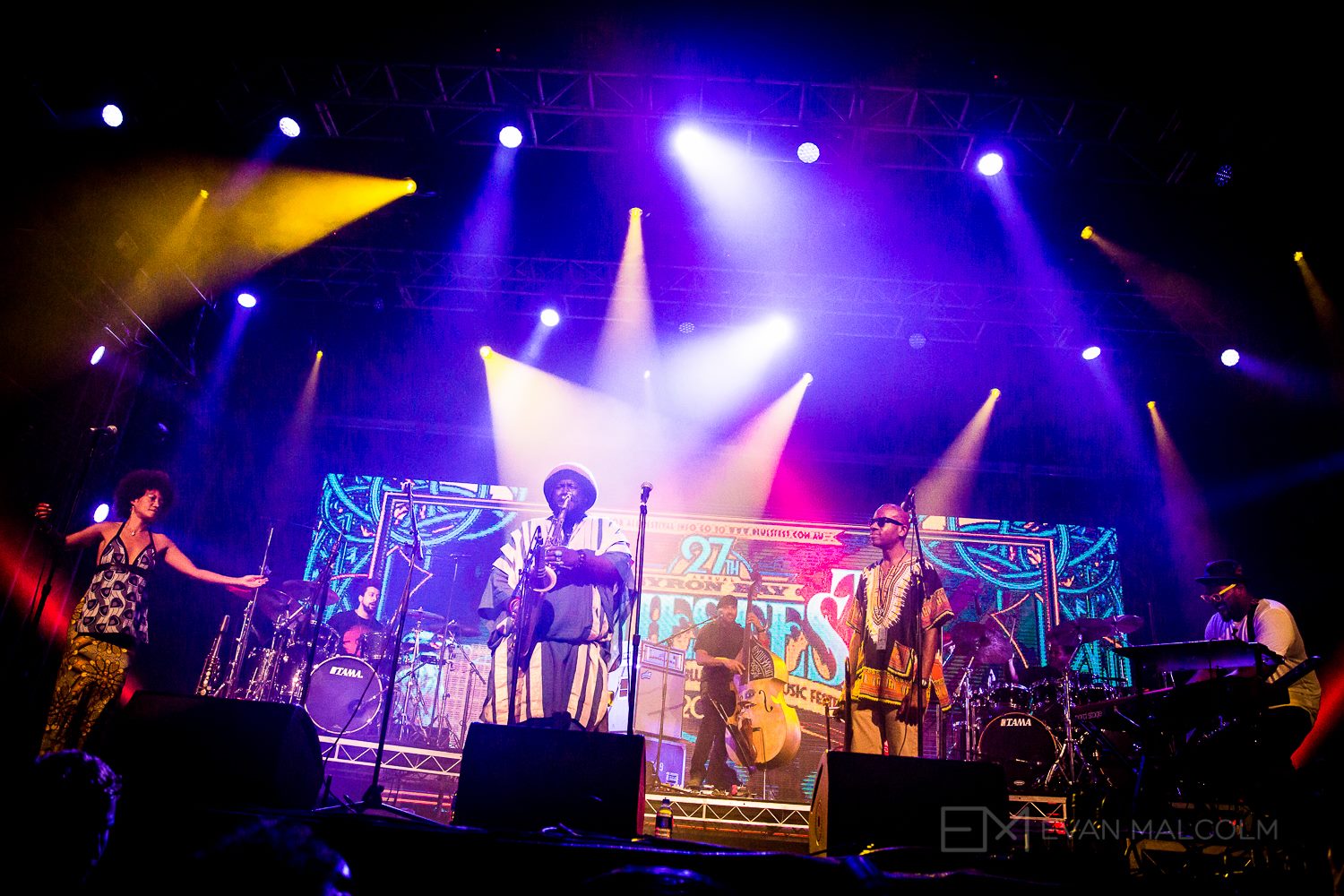 The show quickly changed once more when Washington and the band left the stage, all except for the two “coldest musicians,” drummers Ronald Bruner, Jr. and Tony Austin. What followed was a five minute drum battle between the two, where they smashed out unbelievable rhythms at a unimaginable pace. The band soon returned to the stage, blessing the crowd with more fantastic jazz melodies, not to mention the epic solos from all of the members, most notably Brandon Coleman and his keytar. Of course, the man himself stole the show time and time again, with Washington’s deathly notes pushing the sax to a new level on every track. The 75 minute set was over in an instant, but it was definitely not a show to miss.

Neo-soul, funk king and R&B legend, D’Angelo came out guns blazing , rocking the feather jacket he displayed at the Melbourne and Sydney gigs. In testament to his hugely praised album Voodoo, the singer first performed his steamy tracks Devil Pie as well as Feel Like Makin’ Love, accompanied by his band The Vanguard. Soon after this came songs from his latest Grammy-winning release, Black Messiah. Despite it being his first album in 14 years the songs retained his signature sensual grooves, a characteristic which echoed through tracks such as Real Love, and Sugah Daddy.

D’Angelo’s 2014 release also made way for some compelling topics as well, the stunningly powerful call against racial injustice, The Charade, had the crowd raising their fists in defiance. It wasn’t long until the love tunes came back with my personal jam Brown Sugar, but to my surprise, when the microphone was pointed over, the crowd gave a fairly weak response – no doubt many in the crowd were waiting for Lamar to arrive on stage next. Despite this, D’Angelo still carried on with the same enthusiasm as always, masterfully controlling the stage.

A brief encore break during the 90 minute set saw every Kendrick fan left squeezing their way into the tent, making for an interesting re-entrance when crowd members were already chanting for the Compton king. Nevertheless, D’Angelo pushed on through, ending his set with the super high and energetic Chicken Grease, teasing his set’s finish several times before leaving the stage to massive applause. 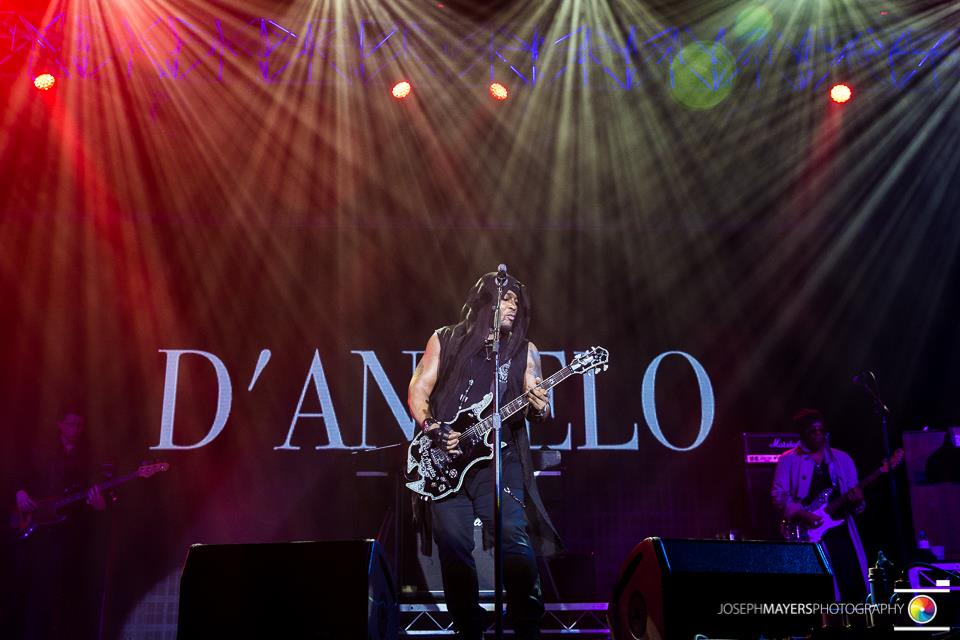 After quite some wait in the seemingly overcrowded tent, it was finally time for the legend of our time to step on stage. In contrast to D’Angelo’s flamboyant entrance, Kendrick came on solemnly and silently, amidst the screams and crowd cheers. He proceeded to tease the crowd, moving to and from the mic, tantalising his opening. When he finally said his first words, we were hit with his jazz backed To Pimp a Butterfly interlude;

Lamar gave the show of a lifetime, performing the gassed anthems from good kid, m.A.A.d city such as Backseat Freestyle, Swimming Pools (Drank) to immense reception early on. Songs from the phenomenal To Pimp A Butterfly moved me the most though, with Institutionalized and the soulful These Walls calming the crowd with their sobering and heartfelt lyrics. After a short trip through the For Sale? interlude, Kendrick hit back even harder with the heavy Hood Politics, Bitch Don’t Kill My Vibe and m.A.A.d city, sending the mosh into a frenzy.

As the show drew close to finishing Lamar played the bigger man, telling two teenagers who had climbed up some scaffolding that they had to get down or they’d stop the show; he still praised them for their energy, but warned that the crowd wouldn’t be too happy if he had to finish his set early. Building on this enthusiasm he dropped the explosive TPAB singles i and King Kunta, taking the energy to impossible new heights. For his final song, the crowd burst into a deafening chant. Kendrick controlled the crowd from loud to soft and back again, as we all cried out, “We gon’ be alright,” over and over. It was a beautiful and powerful moment, one which soared to an unreal high, making it even harder to farewell the west coast king. 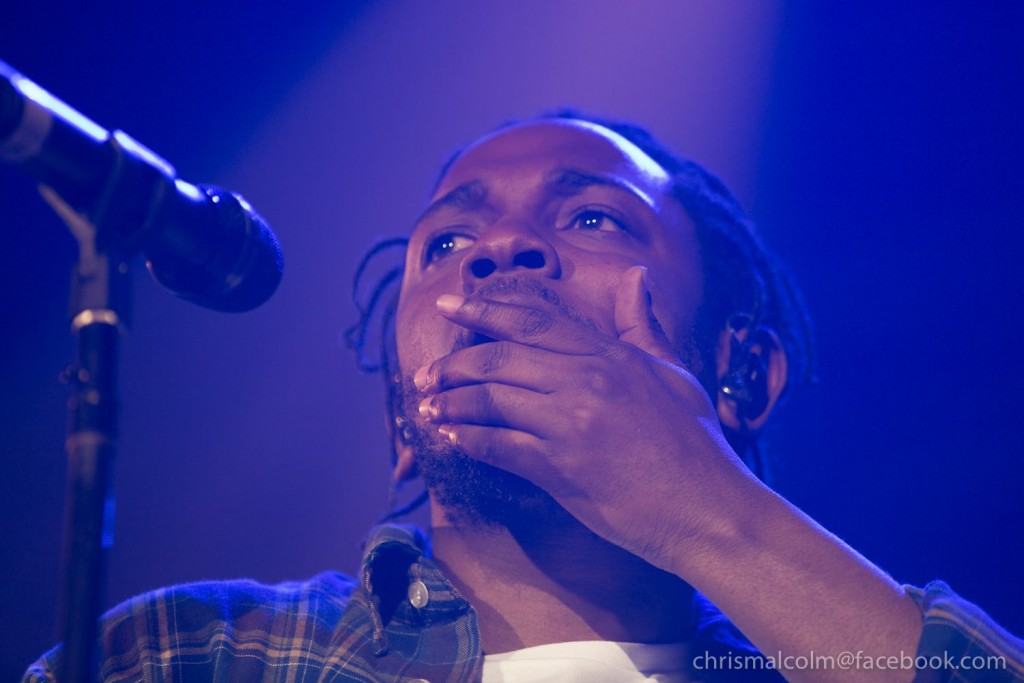 Kendrick Lamar gave the show of a lifetime.

The only shame of the day was that there was no link up between these artists. Washington was an extensively featured guest on TPAB, and the many comparisons that TPAB and Black Messiah received in 2015. Regardless, it was an unforgettable evening, showcasing the best of the best in a perfect environment.

This article was reprinted with permission from Howl & Echoes.

For more information on Howl & Echoes go to: howlandechoes

This year when Bluesfest Byron Bay opens on March 24 it will officially include ‘Boomerang’, a new world festival for all Australians, and…