Local arts writer Jane Denison discovers that behind the success of the Mud Trail lies a dedicated band of North Coast potters, who’ve realized that working together produces amazing results…

It’s the eve of the Mud Trail and I am a plus-one at a Bangalow restaurant in a group of 25 excited potters. Each potter has bought in a bundle of hand-made plates on which the food is to be served. Although the food and wine is good – the group’s attention is firmly on the plates. “Who’s is this one?” a loud voice cries out over the throng of conversation. A bowl is held high into the air and my husband raises his hand. A roar of laughter and congratulatory cheers spills forth, and it’s explained that the dish has been voted ‘Best Salad Bowl’. During the evening, the voting game continues: ‘Best Entree Plate’, ‘Best Platter’, ‘Best Dessert Bowl’. Looking around, I’m amazed by the camaraderie and support between these artists. 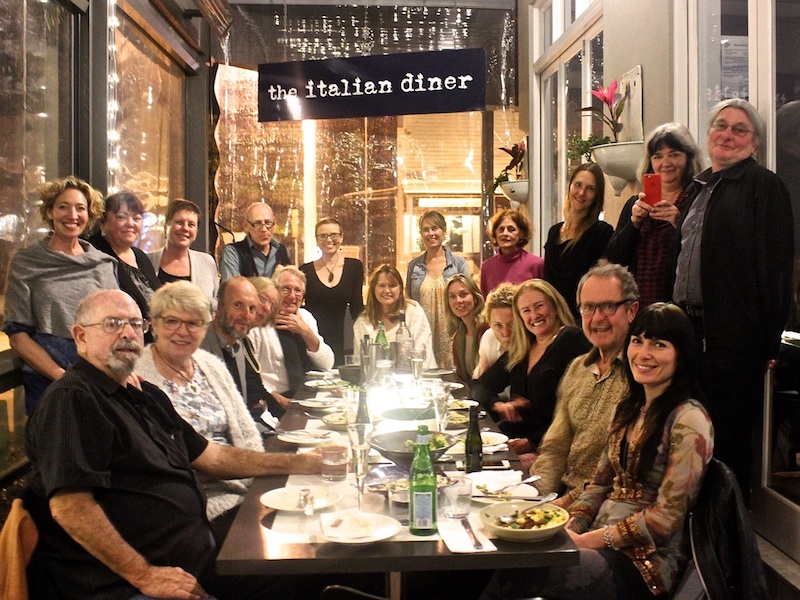 A plethora of potters enjoy a pre Mud Trail dinner at the Italian Diner in Bangalow.

Being a potter is a challenging path. Mostly, it’s a solitary pursuit involving hours spent experimenting in home-studios. Casualties lurk at every step: hairline cracks appear unexpectedly, colours distort and glazes peel and bubble. It’s an art that takes years to master – and even the greats admit that opening the kiln involves a heady mix of joy and disappointment. I often say to friends that I’ve yet to meet an arrogant potter: there’s little space for hubris in such an exacting art.

Once a year, the Mud Trail invites the rest of us into the potters’ world. On entering the artists’ studios, we catch a glimpse of the way conceptual ideas become form. There’s something magical about artists’ studios that fires our imagination. Mud Trail enthusiasts, Susan and Peter Jacobson, feel privileged to enter these spaces. “Being a visual artist, I’m curious to see how other artists set things up, how they work and how they practise,” says Susan. “In a gallery, we see the finished piece – but on the Mud Trail there’s the chance to talk to the person who made the object, to see the journey behind the product and to hear

Joint co-ordinator of the Mud Trail, Claire Atkins from Pinky & Maurice, loves how the Mud Trail has captured the hearts of the local community. “People are curious about potters, and artists’ studios hold such magnetism,” Claire explains. “The Mud Trail is in its fourth year on the North Coast so it’s a local story within a bigger national event. We had 19 local studios open out of 150 nationwide, and the feedback from all the potters is of being overwhelmed by the support of the community.” 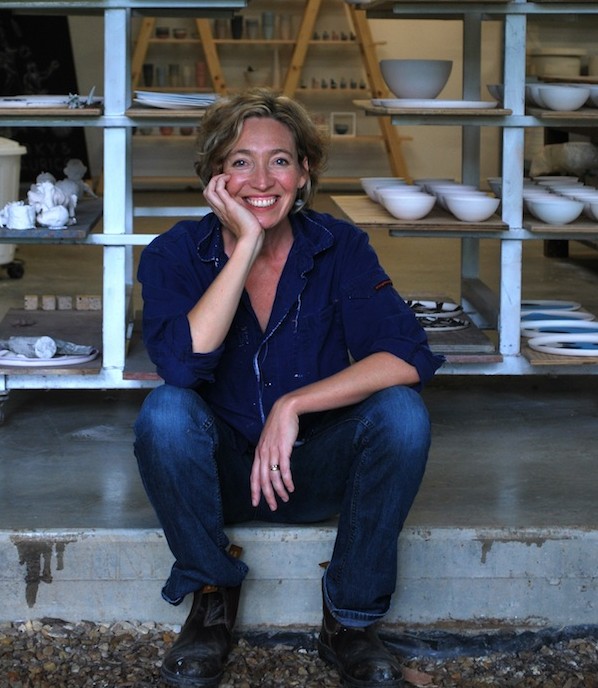 Potter and co-organizer of the Mud Trail, Claire Atkins, in her studio.

Claire’s studio is a favourite on the trail. This year she invited Vicki Grima, “pinch pot queen” and editor of the Australian Journal of Ceramics, to give a talk on the landscape of Australian ceramics and to conduct pinch pot workshops. Vicki’s ethos is that even in small spaces and with limited time we can make beautiful things using our fingers and limited tools. Claire also invited visitors to decorate hundreds of tiny porcelain plates that will form part of the ‘Flying Saucer Show’ that opens at SugarMill Studio in Murwillumbah on September 24. 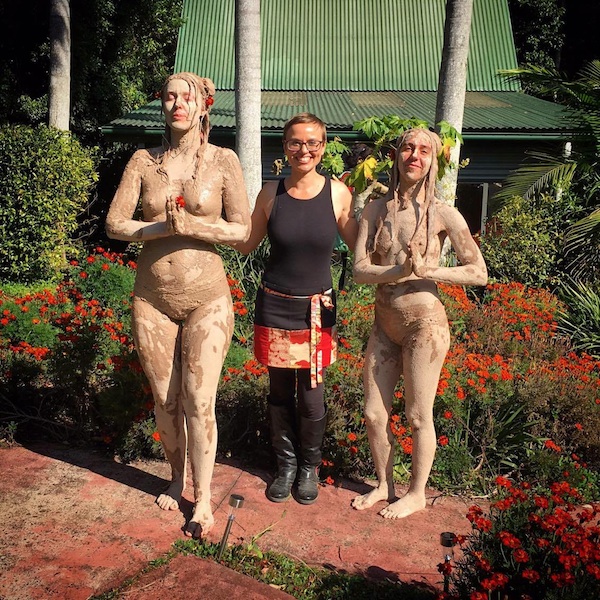 Anna-Marie Wallace’s studio gets a surprise visit from the ‘muddied mud fairies’.

Another favourite on the trail was first-time participant, Anna-Marie Wallace of Made OF Australia. Based in Goonengerry, Anna-Marie uses a saggar firing technique where pots are wrapped and fired in containers along with native Australian ingredients to create an organic and distinct look. Anna-Marie has a dedicated social media following – she’s very active on Instagram, where she openly discusses her successes (and failures) with her 3,500-plus followers. She was touched by the support from followers and business owners seeking new wares. “There must have been 300 to 400 people on the Saturday,” she excitedly recalls. “In the middle of my talks and kiln tours, two mud fairies arrived carrying bunches of flowers. Naked, but for their muddied skin, they laid the flowers at the feet of Caia, my kiln, as an offering to the Kiln Goddesses. It was a moment of reprieve when everyone stopped to watch the mini ceremony – albeit that some people were a little confused by the unexpected guests!”

Anna-Marie feels humbled and validated by her participation in the Mud Trail. “For the first time since starting this business over three years ago, I have concrete evidence that I’m actually not just totally nuts firing ceramic tableware in tins with koala poop and other weird ingredients. Apparently it’s cool – hundreds of people told me so!”

The growing success of this year’s Mud Trail reflects the move towards hand-crafted goods – and ceramics are one of those arts taking centre stage. The Mud Trail also taps into our long-held fascination with artists’ studios. But, aside from being about artists and studios, the Mud Trail is a model of small businesses coming together to promote their individual stories under one banner.

Jane Denison is an arts writer who lives with Greg Furney of Villa Rustica Ceramics.

Mullumbimby artist Emma Walker’s conversation is as multi-layered as her painting, Candida Baker discovers talking to this year’s JADA prize-winner about the origins of…