Mullumbimby artist Emma Walker’s conversation is as multi-layered as her painting, Candida Baker discovers talking to this year’s JADA prize-winner about the origins of creative impulse.

Emma Walker is working on the floor of her studio. Her latest series of paintings are based around last year’s bushfire at Lennox Head, and at the moment she’s using her hands to directly smudge paint onto some tiny square boards.

We’ve been talking about drawing, and Walker is a firm believer that drawing is a foundational skill for all art – and having recently won the 2014 acquisitive Jacaranda Acquisitive Drawing Award (JADA) from Grafton Gallery she should know.

“But people get hung up on what drawing is,” she says. “What I’m doing now is drawing – it may not be drawing with a pencil and paper but it’s making marks on a surface which is the same thing.” A graduate of the National Art School, she places importance on drawing as a skill and believes that it is an integral part of learning to see and observe, but is also keen to point out that it doesn’t mean you have to be a brilliant draftsperson in order to be an artist. “For me it’s not about literal interpretation,” she says. “It’s about making marks, and understanding how to make them powerful.”

Powerful her winning drawing certainly is. The two-metre high, 1.5 metre wide Keys Bridge in Flood, seems to be as much an outpouring of emotion as it does of the rushing water she’s so evocatively conjured up. If the river is in full flood, so, in this drawing is the artist. 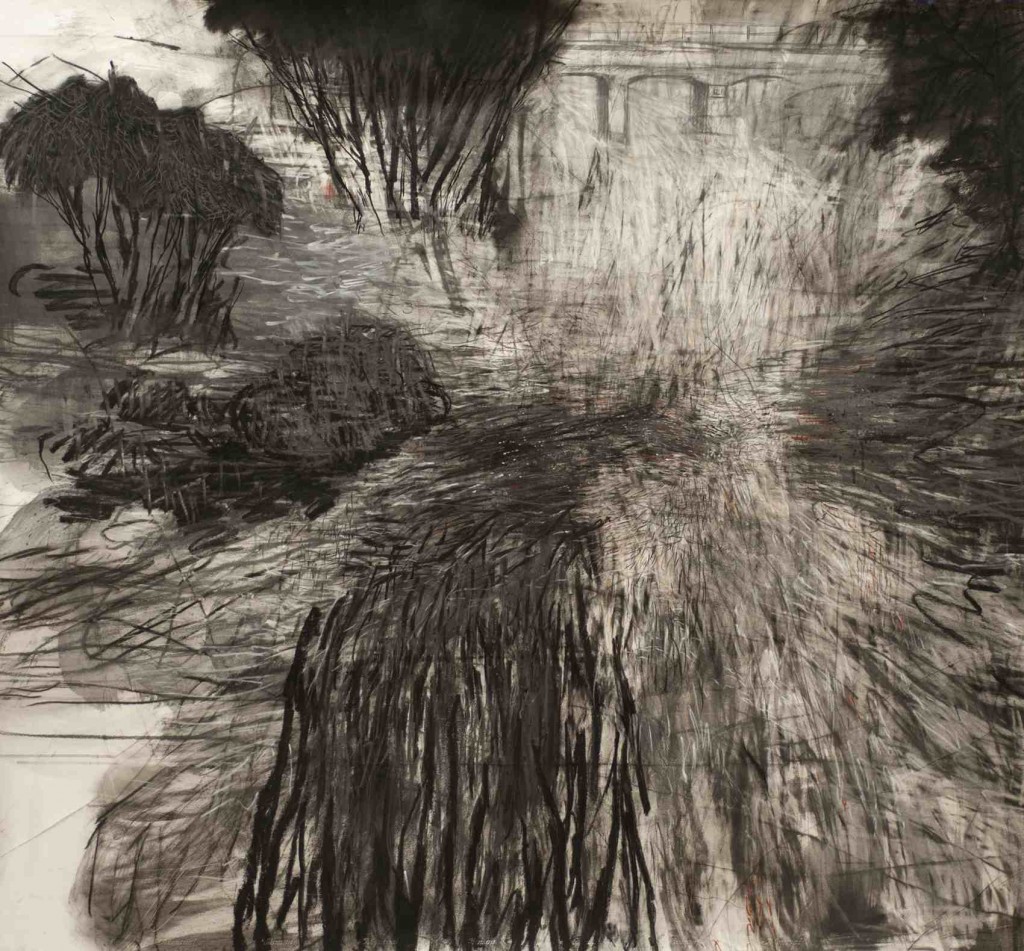 “I was having a low patch at the time I did the drawing,” Walker tells me. “I was just getting frustrated with working in the studio, and in that sheer frustration I got a huge piece of paper and started making these slightly aggressive gestural marks. I did that for a few hours, then something started to emerge that literally became a flood. I knew it was a good drawing when I’d finished it, and I think perhaps it’s because I wasn’t trying to do anything in particular. It came from a raw place within, but also from a place of renewal.” She was also thrilled that the drawing arrived in time to enter the JADA. “I never pull off something good at the right time,” she says. “I just don’t have the ability to make work specifically for prizes, so I was happy when it all came together.”

Prize money of course, is always welcome to an artist, and in this case Walker knows what she’ll do with at least part of the money. “I want to take my kids to Europe,” she says. “I know that we’d all benefit from that enormously.” In fact, she’s surprised that so far she’s lived in the Byron Shire for the past 13 years because her early life was somewhat peripatetic.

“I grew up in Sydney,” she says, “but we travelled all the time between Sydney and south-western New South Wales to our farm near Temora plus the family spent a lot of time travelling around the world. My parents, Edda and Jimmy, were adventurous. Dad was a pig farmer – an aventurous sailor, lover of women and grower of fine beards, and my mother was a top model in the 40’s and was a natural writer and philosopher. My father always wanted to sail, and in the seventies he bought a boat and we sailed around the canals of Europe for a year. He then crossed the Atlantic on his own while my mother, sister and I went to live in Portland, Oregon where we went to school for a year. I also spent three years living in Jakarta and Bali in my early twenties and later spent another year or so in Italy where I studied life drawing. After all the travelling I came back to Australia and finally made the decision to go to art school.”

Walker sees the love of travel as part of her desire to engage with the world around her, and for Walker it’s a multi-layered world, a world full of nature, poetry, music, philosophy and art – all subjects that inform her paintings as they make the connection between landscape, memory and the subconscious.

The inter-connection of everything made its presence felt from her childhood, she says. “When I was going to bed I used to practise a reverse form of meditation – I would try to figure out how I could start with one thought and end up in a completely difference place so quickly. I would focus on my thoughts and ignore my breathing and it produced strange sensations where I would see patterns or have a sensation of shaking or of seeing a line of black scribble.”

She loves, she says, thinking about thinking. In a sense, watching her work for even five minutes, it seems as if painting is an active meditation for her – suddenly it seems as if she is in some kind of deep space – where everything is stilled and focussed.

Watching Walker’s progression as an artist over the years it seems to me that the Keys Bridge drawing, and her Lennox Head bushfire paintings represent a new emotional maturity and a deeper understanding of her own processes as an artist. Her current work spirals through its many layers to a point where abstraction, geometry and her own personal interpretation of nature all meet.

That finely balanced point is not easy to reach, and Walker, who describes herself as a “moody person”, says she needs to spend large amounts of time alone. “I really dislike it when people behave as if being an artist is not a ‘real’ job,” she says, “or when they indulge one’s creative moods as if you’re just playing around. But making art is often difficult and unpleasant work – you’re trying to evoke something or bring something out from within. It requires a huge amount of self-reflection and questioning – and that can get ugly. You also need to be extremely disciplined to work without a boss and get the work done.”

The self-discipline is a skill she acquired even as a young artist. “I moved up here with my kids’ dad in 2001,” she says. (Walker has two children, Ella, 14, and Buzz, 11 – both, she says “excellent and unique humans.”) When they first moved to the area the family lived in Suffolk Park.  “I had a very young baby, but I still got a studio fairly quickly – at the Epicentre in Belongil,” she says. “It used to be the old abattoir but it had been converted to studios and creative spaces – it was a wonderful hub. One morning we all arrived to find it was on fire – we all lost everything.”

“It is the mark of a mature artist that Walker is clearly in control of these influences, taking only what is necessary to forge a distinctive visual language of her own.”
John McDonald

At the same time, despite the loss, Walker discovered the strength of the local community into which she’d moved.   “It was an amazing introduction to our community,” she recalls. “People I’d never met held fundraisers for us, there was music and bands, and the hat was passed around, so we could have something to start up again with…but I did make sure my next studio was made of brick!” 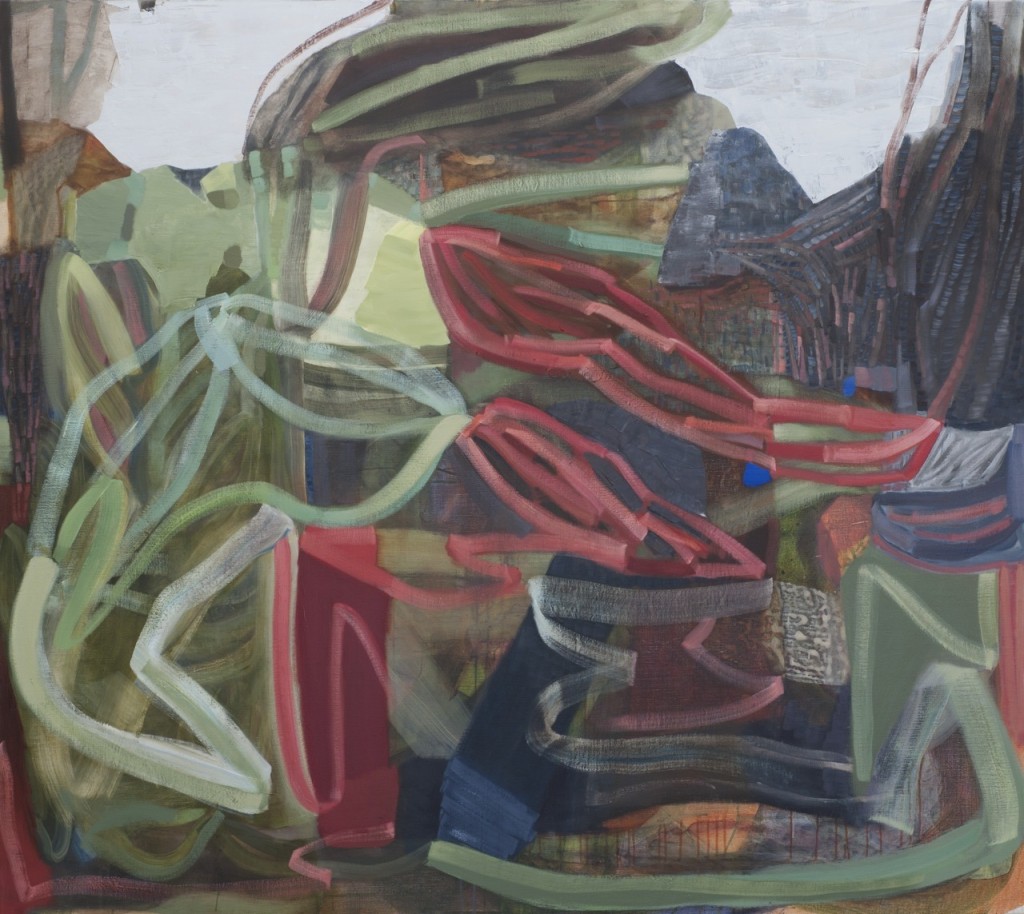 Like most artists Walker has supplemented her income by teaching – most recently through the Byron School of Art which Walker started with fellow artists and friends Michael Cusack, James Guppy, Rick Sherman, Sarah Harvey, Meredith Crowe and Christine Wilcocks. The school, now in its third year, has been remarkably successful in a short time. “It seems as if there really is a need for a place where people who can’t go to university or TAFE but who want to practise art,” she says. “It came about in part because of TAFE funding cuts which saw two of our crew losing their teaching positions but also because we were all involved in a an artist’s group which involved food, wine, collage and loud conversations about teaching and the work that we were all doing in our respective studios. At some point the idea that we should start our own art school became a serious proposition. We found we could all bring different abilities as well as our arts skills to the team, and we all get on extremely well.”

The school offers a variety of different six-week courses as well as a one-year course that operates from its headquarters in the old Bangalow hardware store building. “We’ve been pleased at how the longer courses have gone,” says Walker. “A lot of people want to even continue into a second year. We’ve actually got more people applying than we can fit in, which is very encouraging.”

Encouraging too is that as well as Walker’s well deserved JADA win the drawings by other teachers – Michael Cusack and Christine Wilcocks – from the BSA were also bought by the gallery.

Will she try again next year? She laughs. “If the mood strikes me, it all falls into place, and I get it done, well yes – but it’s not likely knowing my track-record, so in the meantime I’ll enjoy having won this year.”