Local Casino girl Annalise Burton has been accepted into a prestigious costume design course at Nottingham Trent University – but now she needs help from her community to get there.

We’re standing in a field, adjusting the fine details on a beautiful, flowing dress, covered with almost life-like moths – the soft, autumnal colours blending perfectly with the rural background. But we can’t get the mannequin to stand upright on the uneven ground.

“Why don’t you put some manure under it?” says Lisa Burton, to her fashion designer daughter, Annalise, “it’s dry – that should work.”

It seems like a more hygienic option, but also a slightly less, what can I say, quirky option. 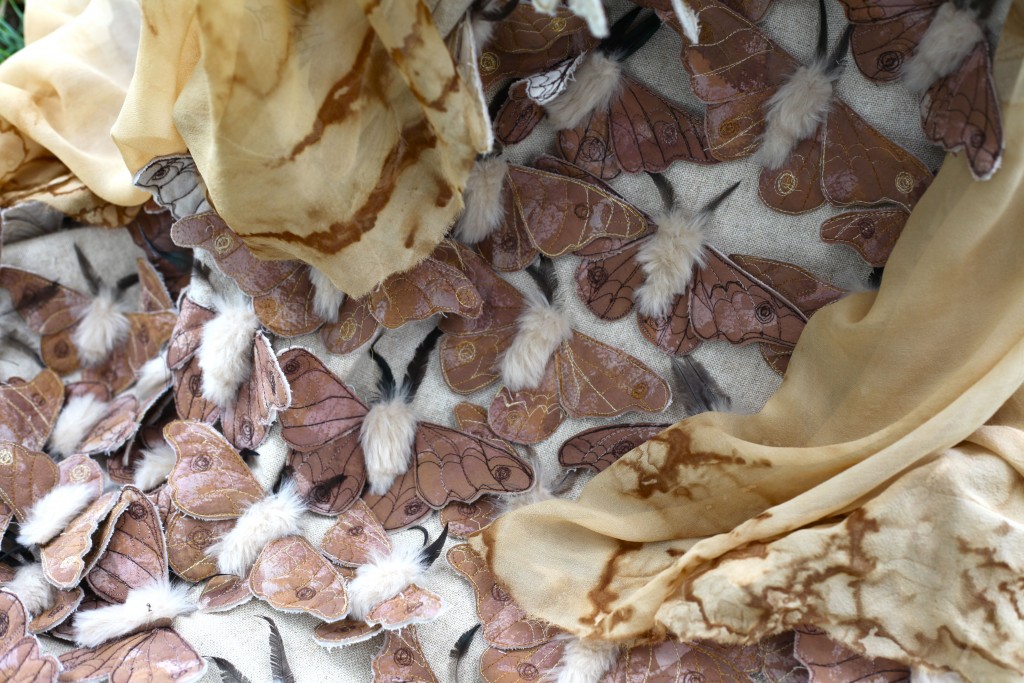 The lifelike moths on the back of Annalise’s dress.

I’m here doing a story on 21-year-old Annalise, because she’s just heard that she’s been offered a place in the prestigious Costume Design and Making Degree at at Nottingham Trent University in England, and after the past four years of studying for her Fashion Diploma at North Coast TAFE, she’s over the moon that next year, her new crowd-funding platform permitting, she’ll be taking a major leap towards her career as a full-time costume designer.

I’ve actually known Annalise and her family for some years, since they adopted a rescue horse from me, and over the ensuing years I’ve watched the horse-mad teenage grow into an amazingly creative young woman – whose wellspring of inspiration comes from the beautiful 900-acre property the family owns at Mongogarie, about half an hour from Casino, in the Northern Rivers.

Chatting over lunch prior to our foray into the fields, Annalise tells me how her ambition to become a designer came about. “I’d really always thought I’d do something with horses, I wanted to be horse trainer,” she says, “and then in Year 12 at school I did my major work in textiles at Casino High School, and I realised I wanted to be a designer.” 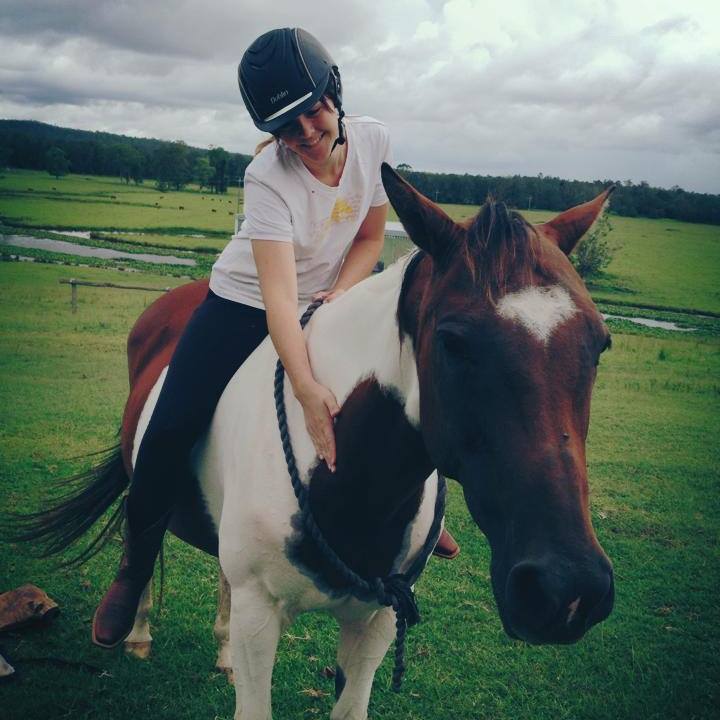 But there’s major work, and there’s major work – Annalise’s first dress was made for her school formal, and it was literally a work of art. “To be honest when this dress started appearing in my imagination I was surprised, but I had an image of it, and it really came from there. I made it from vintage doilies, lace, and glass beads with French knots all through it,” she says, “and the skirt is made from hundreds of hand-made, machine embroidered petals, which I then melted to give it texture.”

It is, without doubt, an extraordinary achievement for any 17-year-old, let alone one making her first dress, and it didn’t take long for it to be snapped up for the Department of Education’s travelling Texstyle exhibition which showcases a small, elite group of the 3,000 odd students who study textiles for the HSC.

But despite the success of the dress, Annalise was still a few steps away from defining exactly what she wanted to. “I knew that I wanted to be in the sewing industry somehow, so applying to North Coast TAFE’s Wollongbar campus to do the diploma was an obvious step,” she says, “and I started to design one-off couture special occasion wear, which I enjoyed, and to support myself I also made clothes for children and babies and sold them at the local markets, but it wasn’t until I branched into doing the costumes that I suddenly knew that’s what I wanted to do.” 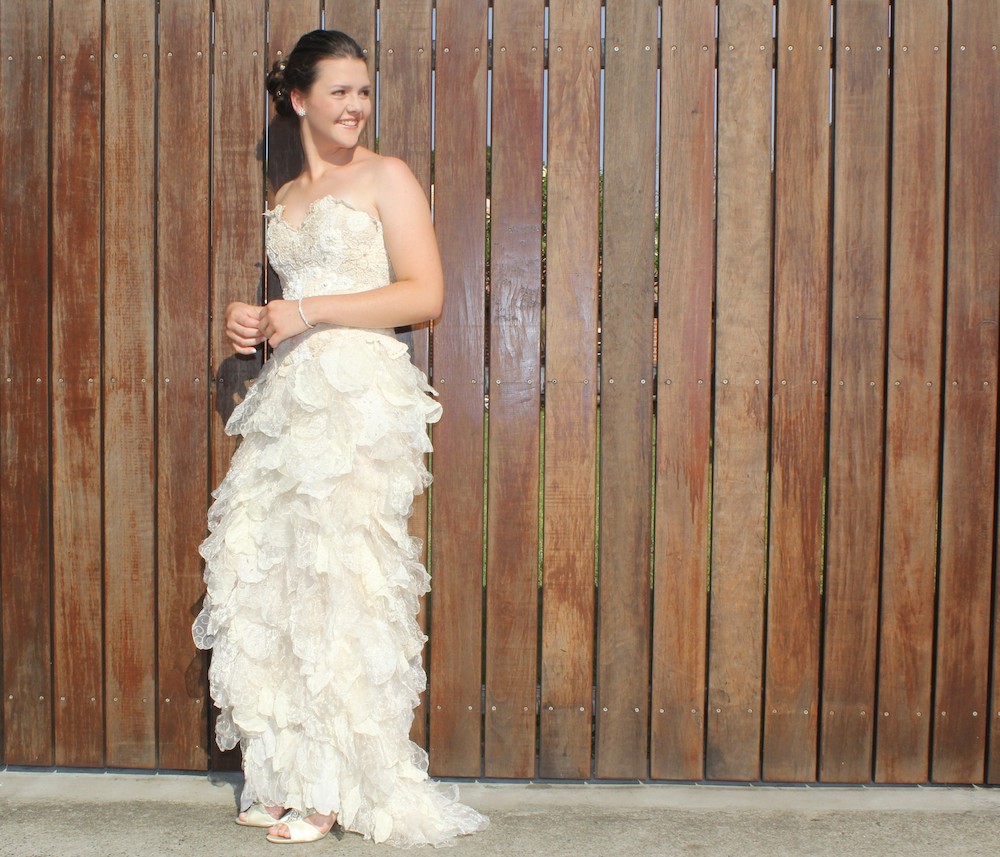 Annalise in the highschool formal dress that started it all.

By the time Annalise graduated from TAFE this year, she’d already become a bit of a local identity. “We’d had some fashion parades, and my school dress had gained quite a lot of publicity, and so after I’d completed several costumes at TAFE, and just loved the process of expanding my ability to construct a garment, and the history of costume. I realised that what I would love to do more than anything is to design and/or make costumes for film.”

Having made that decision, Annalise started researching universities. “I discovered that most universities in Australia were only offering courses that covered what I’d already done,” she says, “so I took a deep breath and started to research universities overseas. I narrowed it down to the top five, and chose Nottingham as my top pick because they cover all aspects of costume-making, wig-making, puppetry, millinery, props, advanced costume construction and illustration.” To her surprise and delight she was accepted.

But unfortunately for the Burtons, their daughter being accepted into one of the UK’s most prestigious universities is just the start of the journey – the $30,000 a year tuition fees are a make or break situation for them. “My mum owns a gift shop in Casino and my Dad works for a milk-carting company,” says Annalise, “and we also raise cattle, but to raise that kind of money is impossible, so that’s why we’ve decided to create a crowd-funding platform for my tuition fees.” 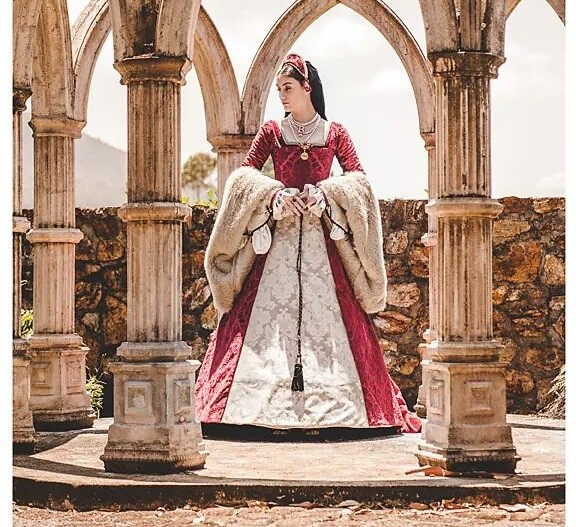 On the day I’m out visiting to interview Annalise and photograph her nature-inspired creations, the family is in full fund-raising planning mode – with everything from selling Lisa’s fabulous Rocky Road to local shops, to auctions of Annalise’s one-off designs and a fund-raising local fashion parade.

We take a drive around the property, and on the way I’m introduced to the goat that thinks he’s a cow, the bull that turned up in their driveway one day and decided to stay, and Annalise’s little herd of horses. As we drive past the lagoon full of water lilies, with the clear blue sky, and the herds of cows standing in the dappled shade of the gum-trees, I do hope that Annalise will take her country inspiration with her to the other side of the world, and at the same time, I wonder how she feels about leaving her family, and the animals and home that are so important to her.

“I’m nervous but excited,” she tells me. “A few years ago I truly couldn’t have possibly imagined I would be doing what I’m doing now. It’s all a bit of a surprise to be honest. Sometimes I have to pinch myself to believe what’s happening. If I manage to raise the funds to get to Nottingham, I know that I will come out of that course industry ready, and a high percentage of students graduate straight into jobs, so I’m really motivated to do as well as I can. It’s an exciting future. I know I’ll get homesick, but it’s something I really want to do.”

If you’d like to get behind Annalise’s journey to Nottingham, email her on [email protected], and watch this space for her crowd-funding details.

To win a double pass to Boomerang Festival’s night of discussion at the Lennox Cultural and Communty Centre on the arts and education, chaired…