Timothy Edwards likes an adventure and recently he and his son Levi decided to pit their skill against the Nymboida River in the company of the Nymboida Canoe Centre.  Not only did they learn to negotiate the rapids, they almost managed to keep the canoe upright.

Years ago, my son Levi and I spent a day riding inflated rubber inner tubes down the Nymboida Creek rapids. The man-made rapid course being shallow, easy-grade rapids and safe were a blast but not exactly challenging. We promised ourselves that one day we would go back and join a group led by expert instructors on the wild Nymboida River and take on some natural rapids in a canoe. So recently we did exactly that.

We arrived at the Nymboida Canoe Centre at eight-thirty as instructed, and after the instructor had fitted us out with personal floatation vests and helmets the entire group of eight participants (under the supervision of four instructors) came together to discuss safety, learn about correct use of equipment and to see dry-land demonstrations of various paddling techniques. With basic instruction out of the way, we were all loaded into a bus to be transported to Hull’s Farm, our beautiful rocky beach starting-point. In a quiet section of water near the launch point, just before heading down river to attempt our first rapid, the instructors led us through half an hour of practicing the various paddling skills we would require throughout the day.

“Levi and I agreed that even though it would have been desirable to make it through the rapid with the boat and us on top of the water, it was also fun to be thrown from the craft and swished down the river amongst the rocks at an enormous rate…”

We also learned that the forward-seated paddler used significantly different paddling techniques to the rear-seated paddler (the forward seat’s role being more of an engine and the rear seat being more of a rudder for the craft) when negotiating the boat through fast-moving water. The lead instructor then gave us all some very specific instructions on how he intended to guide us safely through each rapid section and emphasized how important it was for us to follow his instructions and guidance as closely as we could. When participating in an adventure like this it is great to know that it’s  your own skill and effort that is going to bring you safely through the hazards but at the same time it’s reassuring that there are experts on hand  doing everything they can to ensure that you get things right!

We were formed up into single file, spaced about four boat-lengths apart, and sent on our way paddling steadily towards our first challenge. Levi and I both heard the grumbling and gurgling sound of the rapid well before we actually saw it. The first rapid section was approached one boat at a time with each craft called into the rumbling white water with a single blast from the leader’s whistle.

When our turn came I confess that that my heart rate increased just a little as we headed for the white water. About five metres before we actually reached the churning wash of the rapid we could feel the craft come into the grips of swiftly moving water. It’s a strange sensation to be in control of a vehicle at one moment then to deliberately paddle the craft into a place where the river is attempting to wrench control away from you. Once you’re five metres from the rapid it’s too late to think, “Oops, I’ve changed my mind…I think I’ll come back later…” because once you’re in it, there’s no backing out! We paddled into the fast moving water and felt ourselves whisked along to the place where the water seemed suddenly to fall out from under us.

I shouldn’t make this rapid sound too dramatic. It was just a teeny one and being an easy Grade One rapid every boat made it through the boiling water with a minimum of fuss. Other than the fun of taking on a rapid for the first time and the thrill of travelling down the river at speed while dropping through a maelstrom of rocks and white water the main lesson learned was that the canoeist’s role is not a passive one. If a canoeist allows their shock and awe to distract them from paddling strongly (to both power and steer the craft) the river remains in control and making it through the rapid becomes a matter of luck rather than skill.

Levi Edwards taking a well-earned rest in a quiet spot on the river.

Despite having learned this lesson (and thinking that we had learned it well) we showed just what pathetic, puny creatures we were when we came to the first Grade Two rapid only a few more hundred metres down the river. The guides did a fantastic job in ensuring that we had every chance to succeed at our first real challenge, the Fisherman’s Hut rapid. The lead instructor left his craft on the bank then carefully made his way out into the middle of the torrent so he could point to a spot precisely where he thought it would be best for us to take the first drop. He also sent his senior assistant instructor ahead and asked her to position herself at a place in the water some distance down-stream so that we not only had a potential rescuer in place but also a target that we could aim our crafts towards down the line of the river most likely to be safe.

Each craft was to take on the rapid one at a time with enough space between the boats to enable instructors to ready themselves for any possible rescue that might be needed. Levi and I were first to attempt the rapid, and a sad attempt it was. We paddled towards the first drop with excitement and enthusiasm. The moment the canoe dropped over the edge, the shock of the feeling of weightlessness and the sudden increase in velocity, caused us both to back off on our strong paddling causing the canoe to waddle and wobble on, out of control, for a few seconds. By the time we had both started to paddle again and were rattling along at high speed, we found ourselves heading towards an ill-placed tree that was overhanging the gurgling banks of the river. Levi, thinking that he was about to lose his head, was forced to duck and stop paddling and I, feeling the craft out of control, stopped paddling too. Silly move, that. The next thing we knew we were upside down and bouncing down the river, separated from our craft. When the white water settled back into a slow moving river, the assistant instructor was right at our side helping us to gather ourselves together, helping us to find our paddles and helping us to manoeuvre our boat to the bank where we could empty it of water and prepare ourselves for the next challenge.

The first big challenge was out of the way. Some did well. Others not so well, but every one of us had had a ball. Levi and I agreed that even though it would have been desirable to make it through the rapid with the boat and us on top of the water, it was also fun to be thrown from the craft and swished down the river amongst the rocks at an enormous rate before being deposited safely in a calm eddy with enormous grins on our faces. 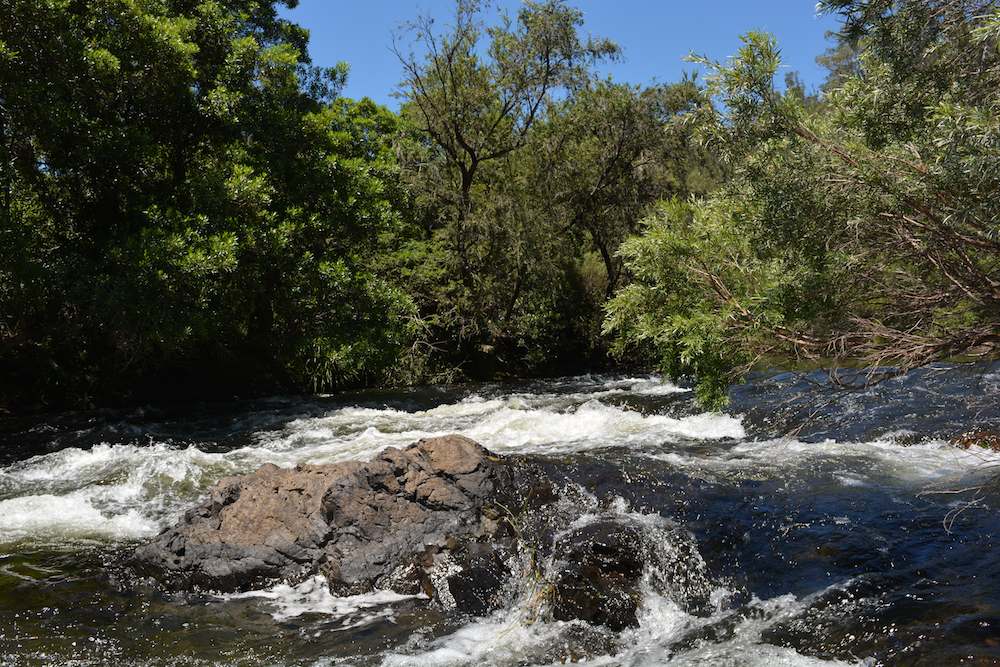 Canoeing is satisfying. You learn new physical and mental skills and you need to apply those skills at every moment of the journey. Walking away from a sixteen-kilometre journey with dozens of challenges along the way and doing it through having learned and endured is enormously satisfying!

Throughout the journey the instructors called a halt to all activities at regular intervals so that we could all could cool down, regenerate and relax with swims, lots of drinks, food and games. But as is the case with most adventures, it’s not just about the adrenaline-charged fun. The Nymboida rapid adventure is also about nature. The river. The country. The animals. The wildness – and the wilderness.

After seven hours of exhilarating and challenging activity we finally paddled our canoes into Buccarumbi where the bus was waiting to carry us back to the canoe centre. Buggered, burnt and bitching about the heat most of us were glad to finish the trip but also thrilled to have been part of it.

When you book a trip on the river make sure that you get a full list of instructions on what you will need. My tip is to wear long shirtsleeves and long trousers (I didn’t do this and boy I regretted it) and bring a hat to wear under the helmet provided. Six or seven hours on the river means you’ll need as much sun protection as you can get. Without taking precautions and reapplying sunscreen all day long you’ll fry. Don’t worry about the long trousers and shirt being too hot. You will be regularly swimming in your clothes (whether by accident or by design) and the wet fabric helps to keep you cool. You will also need lots of cold water and snacks as well.

Any adult or teen with average fitness will manage the sixteen kilometres with no problems. You might have a little muscle soreness the next day but that will just make a great a reminder of the wonderful adventure you’ve just had. If you currently enjoy a completely sedentary lifestyle then you had better check with your doctor first before undertaking this adventure. Failing that, do yourself a favour and get down to the local gym and start a fitness program. It would be pretty annoying for yourself, for your fellow paddlers and for the instructors if you get half way down the river and realize that you are done with and need help to make it to the finish.

Everyone should have a crack at paddling on a wild river at least once in their life. At worst you will end up a bit sore, hot and tired but you’ll be pleased that you had the experience. You might even discover that this is the sporting life you want to live from now on – canoeing may just be the start of a new passion!

Place: Nymboida River (Hull’s Farm to Buccarumbi) – approximately two and a half hours drive from Byron Bay, 35k’s from Grafton.  For more information go to nymboidacanoecentre