What better way to spend a Friday night than being scared out of your brain?  Candida Baker goes beyond her comfort zone at Movie World’s Fright Night…

I was just settling down to plan my Friday night – dinner, a movie, that sort of thing, when my teenage daughter, aka The Princess, called me.

“The thing is Mum,” she said, “there’s four of us, and we’ve all got tickets to Fright Night, and we don’t know how to get there and back.”

So there we are a few hours later, the four of us tootling up the Highway to Movie World where, apparently, I’m going to spend four hours being scared out of my brain. Not only that, but it becomes obvious from the moment we step inside the gates and are greeted by a blood-spattered zombie, I’m going to spend it ALL ALONE, because four teenage girls have disappeared into the dark terror-filled night, to somehow – surprise, surprise, meet up with teenage boys – and one late (very late) middle-aged mother, is standing, just a tad mystified, surrounded by acres of smoke-filled air filled with the sounds of sirens, chainsaws and screams.

I got my bearings by slinking around, with my back to the wall, my camera held out in protection, as I tried to look very cool, not flinching at all when the mad chainsaw massacre man wielded his machine of death up and down the main street and the scariest, bloodiest, masked men I’ve ever seen jumped out at me from – oh my god – strobe lighting. I tried to emphasize my absolute professional disinterest in all things scary – simply here to take photographs, observe, you know, that sort of thing. It was with a huge sense of relief that I chanced upon The Space Cowboy’s Show. One of Byron’s own colourful characters, I’ve seen several of his shows, and so I relaxed, while he merely juggled chainsaws, real this time, until the man with the Pig Face mask booed me from behind.

“Enough,” I thought, and headed for, of course, Rick’s Café Americain, where they have a Fright Night special of all you can eat pizza, pasta, salad and dessert for $15. Well, I can tell you, you can make an all-you-can eat dinner last a very long time if you space yourself, and the food looked way more attractive than the doughnuts I’d seen on the way in, complete with blood filled syringes. Injecting my food has never been high on my list of priorities for a Friday night.

After dinner I took to the horror-filled streets again, and was amazed by the amount of apparently not scared small children running around. If a three-year-old could talk to zombies, I figured, so could I, so the next time a few of them lurched at me, I had a chat and asked them all about themselves. The only problem was they were talking zombie language, and I couldn’t understand a word, but we parted on friendly terms – I think. 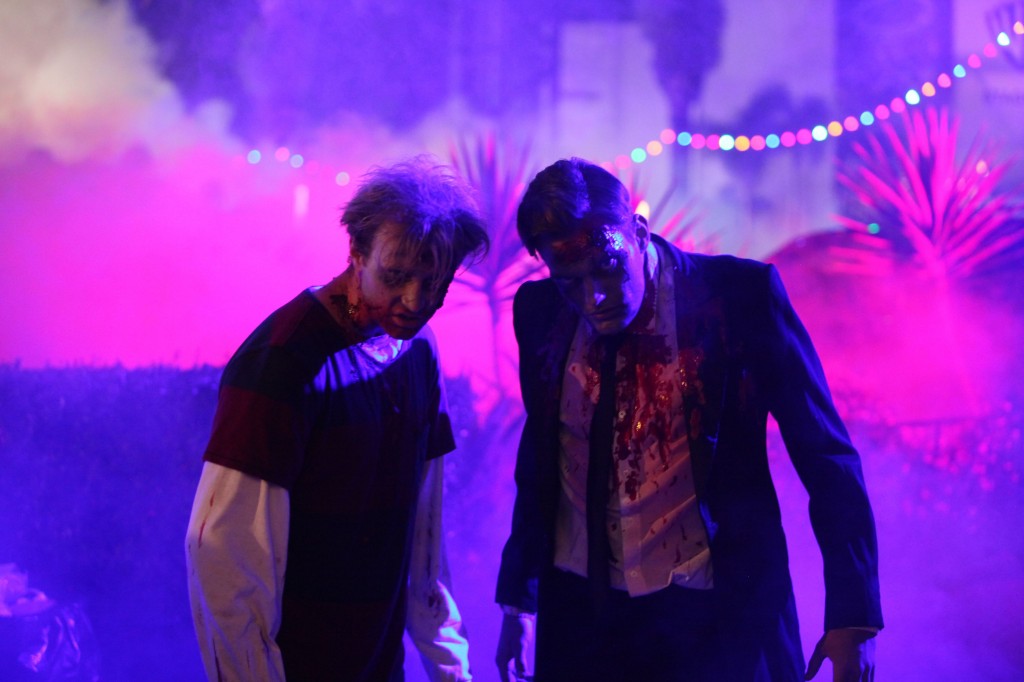 I’m not quite sure when I realised I was actually enjoying myself – there’s nothing like going outside your comfort zone to upset the equilibrium – in a good way, and this was truly fun, especially once I got brave enough to stop slinking in the shadows.

I talked to a friendly vampire ambulance driver, who told me that Fright Night had started just as a Halloween night back in 2006, and had become increasingly popular, so that now it’s on every Friday night throughout October, the culmination of course being Halloween.

It’s a strange idea really that there are hundreds and thousands of us who will pay good money to go and be scared out of our wits, but the show is truly value for money. I couldn’t quite cope with the idea of going through the scary mazes by myself, and The Princess’s phone was definitely off to Mother callers, but I talked to some people at the exits who were in awe of everything.

When I finally met up with The Princess and her friends, and we headed for home, they talked excitedly for half-an-hour and then fell sound asleep.  The Mother taxi wended its way back down the highway. Not my usual Friday night, but a fun and freaky one for sure.

For more information and to book tickets go to: frightnights.com.au

A lecturer in environmental science at Southern Cross University, and a mum to two small children, Hanabeth Luke signed up for Plastic-Free July, and…