NORPA’s production of Railway Wonderland has all the hallmarks of an Australian classic, writes Candida Baker.

For me there’s always a certain anticipatory frisson about going to the theatre – there’s the idea that what I might be going to see is going to transport me into a world of fantasy in a way that film, even with all its bells and whistles, never quite manages.

Standing at the entrance of the now-disused Lismore Railway Station, transformed into a theatre set for the first return of Railway Wonderland, written by Janis Balodis and directed by NORPA artistic director Julian Louis, there was an almost tangible feeling of excitement in the cool evening air. An old shipping container was transformed into the pre-show night-time diner, fairy lights were strung, not just along the entire platform, but along the disused line as well, and the walk across the purpose-built bridge to the seating opposite the platform, suggested that transportation – of all kinds – might not be far away.

Almost 30 years ago I sat in a Sydney theatre, and succumbed to the charms of a new work by a young playwright, Michael Gow. The play, Away, set in the summer of 1967-1968, explored, amongst other themes, the effect of the Vietnam War on Australia, the death of a child, and the undercurrent of darker family tensions set against the inevitable annual summer holiday. Two years later I was wowed once more when Strictly Ballroom had its first major theatrical outing at the Wharf in Sydney, and it of course went on to cement Baz Luhrmann’s career – as a writer and director.

Both those works, and many others too of course in the canon of Australian theatre, owe a debt to a much older Australian play – Dimboola by Jack Hibberd, set at a wedding with the actors playing the families of the bride and groom, and the audience ‘playing’ the invited guests. Dimboola became a phenomenal success and in many ways it was not only the precursor of play such as Away and Strictly Ballroom, but it was also, one could argue, the spark that lit a certain style of Australian theatricality – rambunctious, irreverent and yet tinged with a certain deep poignancy. This melodramatic, occasionally musical genre slipped into film as well – Muriel’s Wedding, for instance, or Priscilla, Queen of the Desert, The Dish – even Red Dog, although the book was originally written by an Englishman of French extraction, Louis de Bernières. 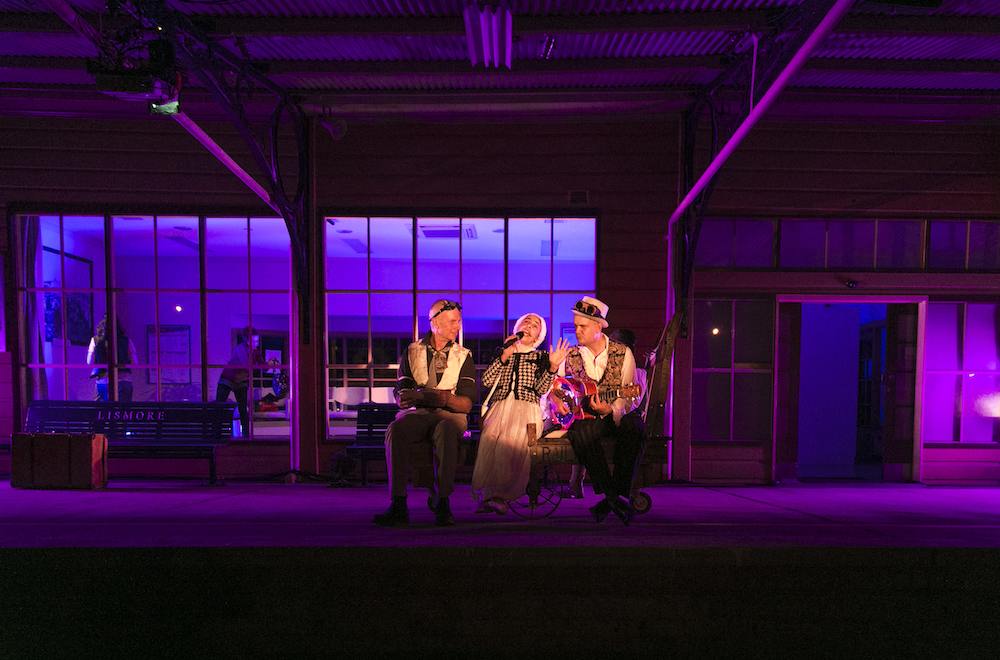 Ana (Katia Moliano) bursts into song, while behind her the bus passengers dance the time away. Photo: Kate Holmes

From the first moment of Railway Wonderland, as the wonderful sounds of the Vox Caldera choir under the masterful direction of Nicholas Routley, filled the night my sense of excitement increased. And I wasn’t disappointed – the story took off into the night, faster than a speeding XPT, taking all of us with it for the ride.

It was back in 2009 that NORPA asked the public to submit short stories about journeys or events that had taken place at Lismore Station. The last train had departed from there in May 2004, and these days the station waiting room is only used for the CountryLink buses, who make their way across from the coast, through the hinterland to Casino where they connect with the Sydney trains.

The company received an avalanche of material – from songs, to movies, to tales of migrants – many of them Italian – arriving in the region to create their new lives, and from all of these Julian Louis and a group of actors  began to create a linked series of vignettes, in which strangers in the waiting room, begin to connect. The work was devised by the entire group and the script was formed from a collaborative process of improvisation, movement and character play by the cast. After that process Janis Balodis and Louis then shaped and fashioned a script together – with the cast members and Balodis being credited as ‘devisors’. Railway Wonderland had its premiere in 2012 in Lismore, and having missed it the first time, I was intrigued to catch up with it.

These days, of course, with cheap air travel, and the closure of many railway lines (including in this area) there are many younger people for whom train travel is not the essential experience of life it once was for so many of us. Seeing people off at train stations, waiting for loved ones to arrive, travelling through the countryside (gazing out of the window in a train reverie), and the importance of the train station to a local community were all something we used to take for granted.

The group, writer Janis Balodis and Louis have created something wonderful here – a melodramatic musical based around the theme of ‘hellos’ and ‘goodbyes’, the main story told by Anna, played by Katia Molino.

As a now-old Anna waits for the train that never comes, she talks directly to the audience, acting as a conduit for us between the disconnected group of people in the waiting room, and to her younger self, arriving as a sixteen-year-old proxy-bride at Lismore station, only to be greeted by Giacomo (Phillip Blackman), who is less than impressed by the first sight of his young bride.

Molino strikes just the right balance with Anna, as she segues between the present and the past, confusing the young man waiting for the bus, who is going to Sydney to tell his Greek mother that he doesn’t want to marry a girl, he wants, “to marry Dave’, with her son Marco, who was drafted into the Vietnam War, and returned only to leave home, of course, as children do. Dave/Marco is played by Demetrios Sirilas, an actor with an easy charisma, and, not surprisingly given his name, a fabulous line in an Effie-style Greek Mother accent. 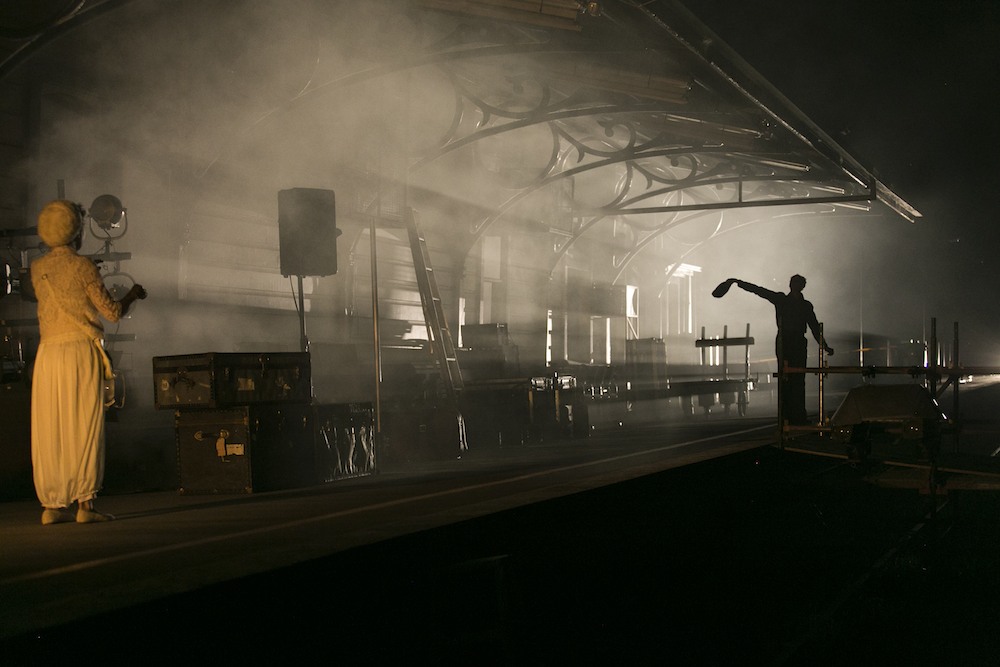 Other characters include sixteen-year-old Kelsie, whose boyfriend has stood her up at the last minute. Kelsie is left to work out what she might do if she goes to Sydney, figuring that perhaps she’ll go anyway and look up her Dad. Kelsie is played with extraordinary force and energy by Helen Christinson, who also doubles, or triples, as Laura and Diana, with Laura’s dramatic falling in love with Alec, played out in short, sharp scenes mimicked by old movies projected behind. Jo Turner who plays the upper-crust Alec, smitten by the tall redhead he accidentally meets on the platform, also doubles as Garry, your classic diamond in the rough, on his way to an audition for ‘Orstraya’s’ Got Talent, with a can of 4X and a ciggie never far from his hand. In a neat juxtaposition to Kelsie’s dilemma, Garry wonders if the daughter he left some years before might be open to a visit from him.

Local dancer and choreographer Phillip Blackman proves why every performer should at least have some dance training, bringing an edgy precision to his on-the-spectrum character of Leonard, and a poetic grace to Giacoamo, Ana’s initially reluctant husband. Leonard, it turns out, works in IT at the local nursing home, and knows all there is to know about railway and bus timetables.

The other ‘character’ that is never far away is the audience, seen only by Anna, who breaks down the Fourth Wall to speak directly to us, involving us in her recollections of train-station memories, and the audience is delighted to go along with the device, with most of us, I’m sure acknowledging the deep emotions that are inherent in greetings and goodbyes. At one point, when Garry remarks that he doesn’t believe in angels, we become part of a heavenly host, and at the same time an increasing awareness that Anna, although she tells us she is going to catch the train, and start her journey back to Italy, is perhaps closer to heaven than earth.

The wonderful, almost theatre of the absurd, style dances, the soaring voices of the choir singing everything from Verdi to That’s Amore; the combination of low-tech props with the high-tech AV and projected images; the songs, sometimes daft, sometimes deeply emotive,  along with the poignant use of the once-loved now deserted railway platform, make this a night, and a play to remember.

It isn’t hard to imagine Railway Wonderland being performed right around the country, taking with it its message of integration, multiculturalism, changing mores, chance meetings – and the suggestion that life is a series of journeys. We’re here for the ride and we may as well enjoy it.

Outdoor street diner, bar and music at the Lismore train station from 6.30pm.

Robert Drewe discovers that Stating the Bleeding Obvious has somehow become a well-respected profession. Regular readers might have noticed that this column is intrigued…