The Bentley Effect recently won the best Byron film at the Byron Bay Film Festival, and after sell out screenings in Byron Bay, Lismore and Nimbin, the gripping story of The Northern Rivers’ remarkable and heroic social movement to protect the region from gas mining is showing in Nimbin and Mullumbimby.

A near six year labour of love from local Director and Producer, Brendan Shoebridge, The Bentley Effect faithfully chronicles the campaign that led to the fateful showdown at the gates of Bentley, near Lismore.

The reception to the film has been extraordinary, receiving standing ovations at all of its screenings to date. “I was completely blown away by the audience reaction to The Bentley Effect’s World Premiere,” Brendan Shoebridge says.  “I was completely unprepared for the standing ovation and honoured and humbled by such an emotional response to the film. It’s a tremendous relief to know that it’s ticked the boxes. The first priority was to ensure it was entertaining, but I didn’t want to make a film that people would simply watch either. I wanted to offer the audience an experience, the achat cialis en ligne next best thing to being there on the blockades. It also had to inspire hope and stay true to what played out.” 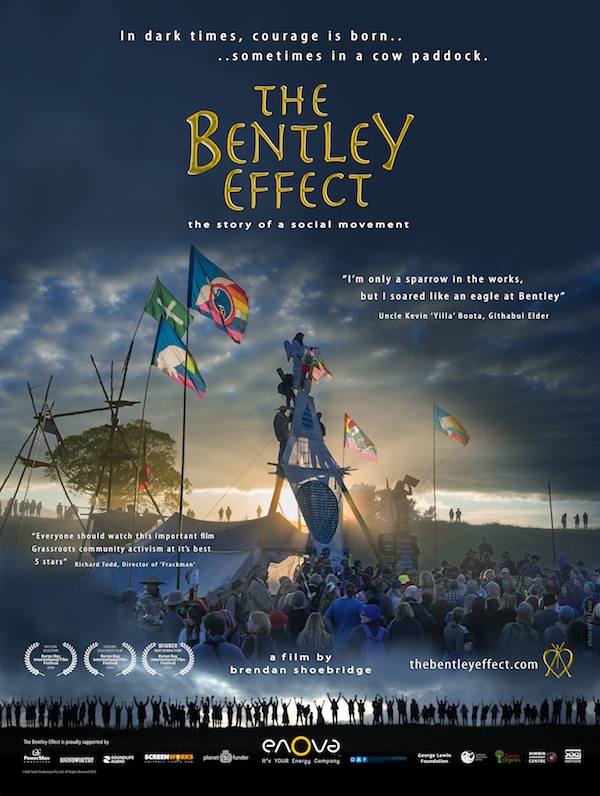 The film is not just the story of a social movement however. Woven through the commentary is a much broader discussion about the current political climate and the inability of our government to see beyond short term gain and corporate profits.

“It’s a remarkable time to release this documentary which is ultimately about standing up to corporate greed and general madness,” says Shoebridge, “especially in light of the protests boiling over in Dakota, the abhorrent Adani Carmichael Mine approvals now looming over our embattled Reef and places as unique as the Kimberly region – the third most pristine coastline in the world after the Arctic and Antarctic coast – all currently under fierce attack from fossil fuel interests – and all at a time when we know we must accelerate in the opposite direction. But with our State and Federal governments threatening legislation which would prevent environmental groups from taking legal action, whilst effectively removing the right of civilians to protest, the time really has come for people to take the power back into their own hands and show our political representatives what democracy is really about. I hope taking a trip back to Bentley through the eyes of the protestors will inspire The Bentley Effect to spread fast and ripple across the globe” says Shoebridge.

The film won the Byron Film Award at the Byron Bay International Film Festival recently and is touring select cinemas throughout the Northern Rivers before a wider distribution plan is hatched to send the film national and around the world. 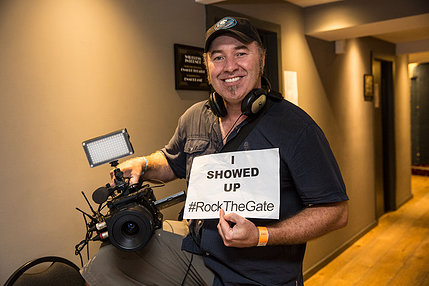 To assist the film’s rollout, the production has partnered with Enova Energy -­‐ Australia’s first community-­‐owned renewable energy company.  The Bentley Effect and Enova are also teaming up with COREM to bring Mullumbimby a celebration to remember on Saturday the 3rd of December 2016 at the Mullum Civic Hall with a combined movie screening, fundraising dinner and entertainment until midnight.

With a stellar line up of renowned popular Bentley entertainers joining this celebration, the evening is sure to be a highlight of the Mullumbimby entertainment calendar for 2016. Commencing at 6pm with dinner being catered by the organic COREM Café, the documentary will then screen, desert will follow and the celebration of the achievements of our community at Bentley will continue on the dance floor. We wish to bring the community connection that was the Bentley Blockade to the Mullum Civic Hall and acknowledge the incredible achievement of the northern rivers in stopping Coal Seam Gas. Enova will be present to promote their sign up campaign to switch local residents to Enova Energy and local beer brewers Stone & Wood are also supporting the event.

Tickets are $25 waged, $15 unwaged/concession, kids under 12 are free and dinner will be available for $15 a plate and for those flush with cash there will be a $50 Gold Pass ticket available (including dinner).

Proceeds of the evening will go towards the production of the documentary and COREM – Community.