Beer-making, coffee machines, cattle and pigs – to the entrepreneurial Cromwell family, farming and business run in the blood, writes Digby Hildreth.  Mention Verandah Magazine at their next Beef and Pork pop-up day to get a 10% discount, or put in the special Verandah code for a discount on their espresso coffee machines.

EVERY morning Greg Cromwell drives from the Goonengerry property he farms with his wife Alison and three daughters to load up their ute with fresh produce thrown out by the two local Woolworths supermarkets. The mound of fruit and veg is destined for the several dozen heritage pigs the Cromwells breed and raise, along with cattle, kelpies, chooks and native stingless bees.

On the day I’m there to visit the English Large Blacks know what’s coming and squeal with excitement. It’s a feast and they launch in to the aromatic mess, nosing out and crunching the sweet melons and mangoes first, chomping away in a porcine feeding frenzy.

Their gourmet lunches make the Large Blacks even larger (some need to be put onto light rations) while the diversity in their diet means they’re healthy and content. Already a calm breed, they’re even easier to manage with their happy Northern Rivers lifestyle – a plus for any farmer. The same applies to  cromwellfarms mob of cattle – about 40 Dexters, a breed chosen mainly for their placid nature. 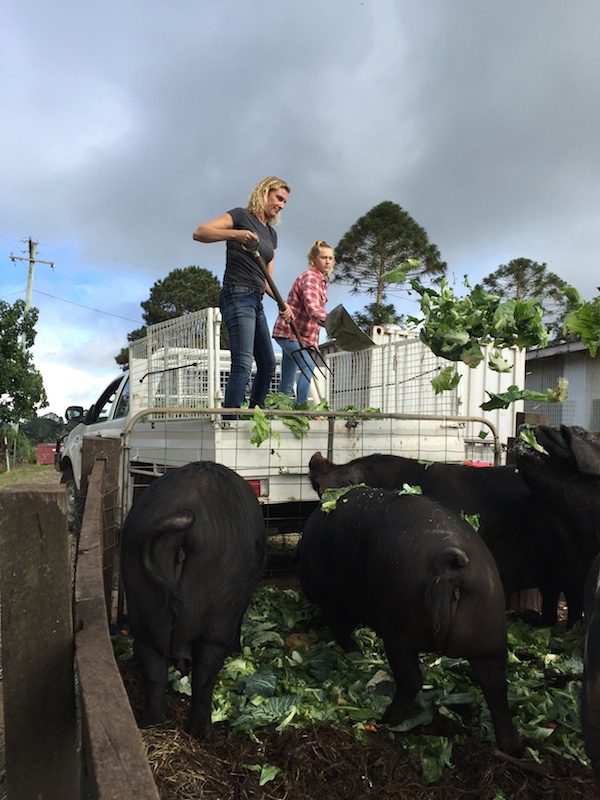 While three-hour trip is barely worth what is saved in feed costs, it routinely includes other collections: at Byron Bay’s industrial estate Greg (or sometimes Alison) picks up sacks of spinach stalks from Byron Bay Pizza Co, coffee “chaff” from Marvell St Coffee Roasters, and mulch-worthy sawdust from furniture maker Jeremy Lee’s workshop.

Besides, the Woolies “waste” produce would otherwise become landfill, Greg says. This way, about 100 tonne a year of it, plus 10 more or so from each of the Shire’s major music festivals, gets “turned into bacon”.  And of course the varied diet makes them, in turn, even tastier.

Driving it all is the burly Canadian’s restless entrepreneurial spirit – fomenting ideas, building relationships, creating efficiencies and synergies – combined with the couple’s passion for family farming and a deep-seated love of the land.

It’s in their blood. Though Greg grew up in Toronto, any leisure time was spent in the country, on farms or hunting and fishing with his grandfather. His mother’s people began farming in Ontario in the 1850s and she still lives in the farmhouse built by her great grandfather. Alison’s dad was a farmer and becoming one was always something of a dream for her.

Though Greg denies being “a greenie”, one major goal is to leave the planet a better place, fulfilling an obligation to be the optimum stewards of the acreage the Cromwells know they are privileged to own.  The cattle are on constant paddock rotation and have been chemical-free for a year, with the goal being to go fully organic.

The couple met in Toronto in the early 90s and in 2000 they left the city to farm in remote country before coming to Australia, where Alison was raised (also in Toronto – although this Toronto was a suburb of Lake Macquarie). They rented, bought a small holding and a few animals, then acquired the old Sheaffe’s farm with a view to bringing it back into production.

It’s been a success. As breeders they supply piglets to individual buyers, or to The Farm at Ewingsdale, where they are something of a tourist attraction – though their ultimate destination is in dishes created by the 3 Blue Ducks restaurant there. Or, following the attentions of abattoirs at Booyong and Casino, and the Clunes butcher, they become in-demand delicacies on the menu at Harvest in Newrybar, the Bangalow Bowlo’s Stockpot Kitchen (250 serves in one night), Byron’s 100 Mile Table or Black Sombrero in Lismore. Cromwell beef, chicken and fresh produce are also in big demand amongst the region’s respected eateries. 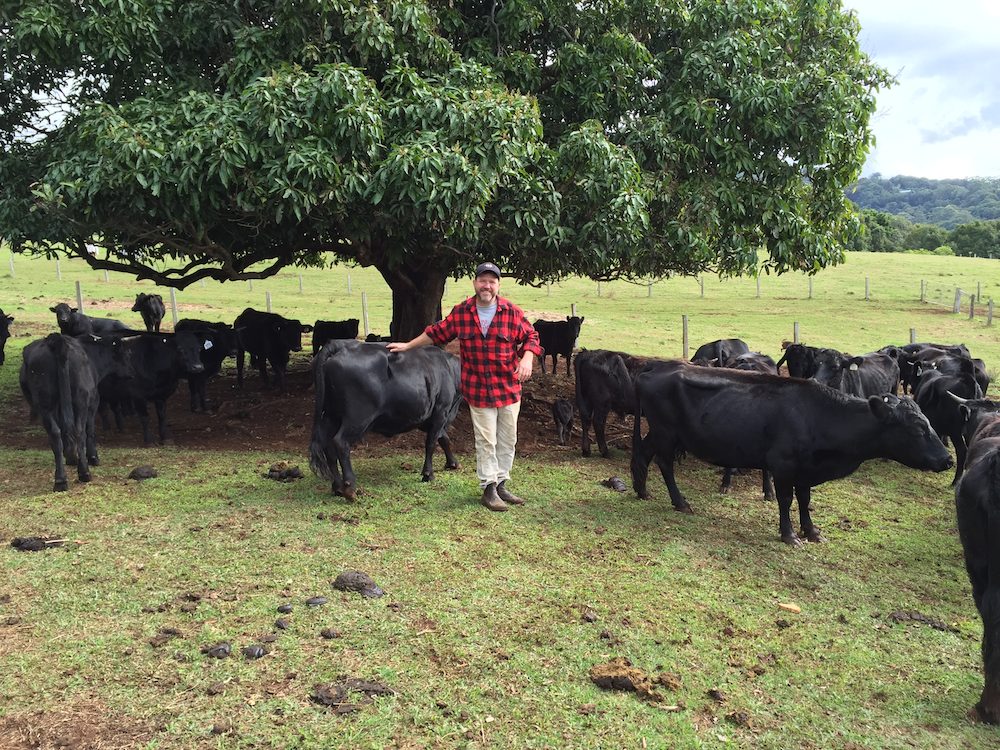 But while the farming is varied, it’s small scale, and only viable because of parallel business activities. The Sheaffes Road property is also HQ for several companies, all having their genesis in Greg’s start-up savvy.

His first real job was selling Telex machines and he gained an “intimate knowledge” of IBM’s early 029 card punching machine, then a comprehensive knowledge of beer during 10 years with the Upper Canada Brewing Co, helping to take the company public (and doing himself out of a job). Marketing beer and helping grow the fledgling Steam Whistle Brewing with two other “fired guys”, he became something of a high-flier, on the board of the Toronto Arts Council and the city’s Fringe Festival. Meeting Leonard Cohen was a highlight. But it wasn’t all plain sailing and he admits to having had business failures and a few real estate calamities. “They all helped to build resilience,” he says. Over the years the entrepreneurial eye has become finely honed, meaning he often seems to be in the right place at the right time. 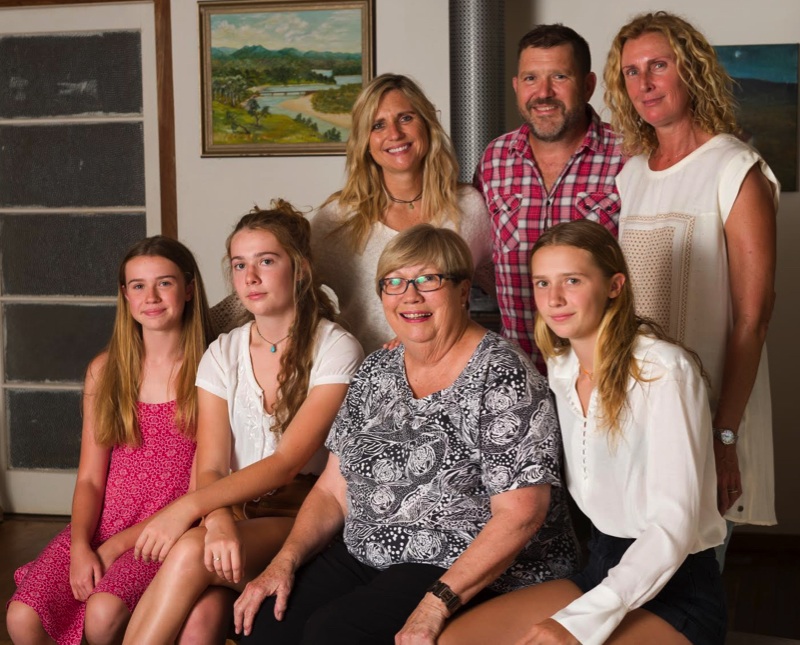 While honeymooning with Alison in Tasmania, he came across Blundstone workboots for the first time and began making inquiries. Within a couple of years, they had exclusive rights to distribute Blundstones in Canada, and to retail RM Williams boots there as well. The Canadians love them and now the Cromwell’s three Australian Boot Company stores sell hundreds of thousand of pairs there. “It’s a big deal, and has allowed us to have some freedom to undertake new ventures here,” Greg says.

They also import and distribute a range of stylish coffee-making products, most notably the ROK Unplugged Espresso kit that allows aficionados to grind their own beans and make, sans electricity, a personalised cup of coffee, silently and with a warm glow of satisfaction.

They have their own coffee blend too, under the Top Shed label and are in the process of planting 100 coffee trees. With a large roasting machine already purchased, they are looking for a site to do their own processing through a new venture, The Coffee Agency. Beer-making is also in the pipeline, with a sort of “bake, roast and brew centre” envisaged for the property. A line of organic maple syrup is another possibility. (Enter the code Verandah 10 on the website to receive a 10% discount on the Espresso Unplugged coffee maker and grinder espressounplugged).

But none of this would be possible without the family showing a remarkable teamwork. Everyone pitches in, and with a grasshopper-minded dad whose personal motto is ‘fire, ready, aim,’ they need to be ready to hop to at a moment’s notice.  “Alison and the girls make it all happen,” Greg says. “Without their capabilities and enthusiasm, this wouldn’t be possible.” Alison is the principal carer of the five horses on the property, including the latest acquisition, Bobbin. The three-year-old female brumby is a rescue horse from the Guy Fawkes Heritage Horse Association, yet to be ridden but settling in nicely.

The three teenage girls all fill significant roles in both the business and the hands-on side of the running of the property, including organising the farm’s beef and pork pop-up days, which attract up to 120 hungry guests.

“They set it all up, do all the selling, take visitors on tour, keep an eye on their children,” Greg says. “They’ve been empowered by their experience here.”

Morley, 16, has shown a talent for marketing, mastering Gumtree to advertise all the livestock, including the litters of kelpie puppies. She sold her first heifer when she was 10 and she has developed an expert eye for pricing, and for the formation and structure of cattle. Next she wants to upgrade the farm’s chicken breeding to include an incubator and a brooder box.

Eldest daughter Aubrey is off to UQ next year to study sports medicine, so someone will have to take over her duties keeping the animals’ records – births, deaths and “marriages”, tag numbers, treatments and so on. And the youngest, Bella, 14, feeds the dogs and helps train the horses. 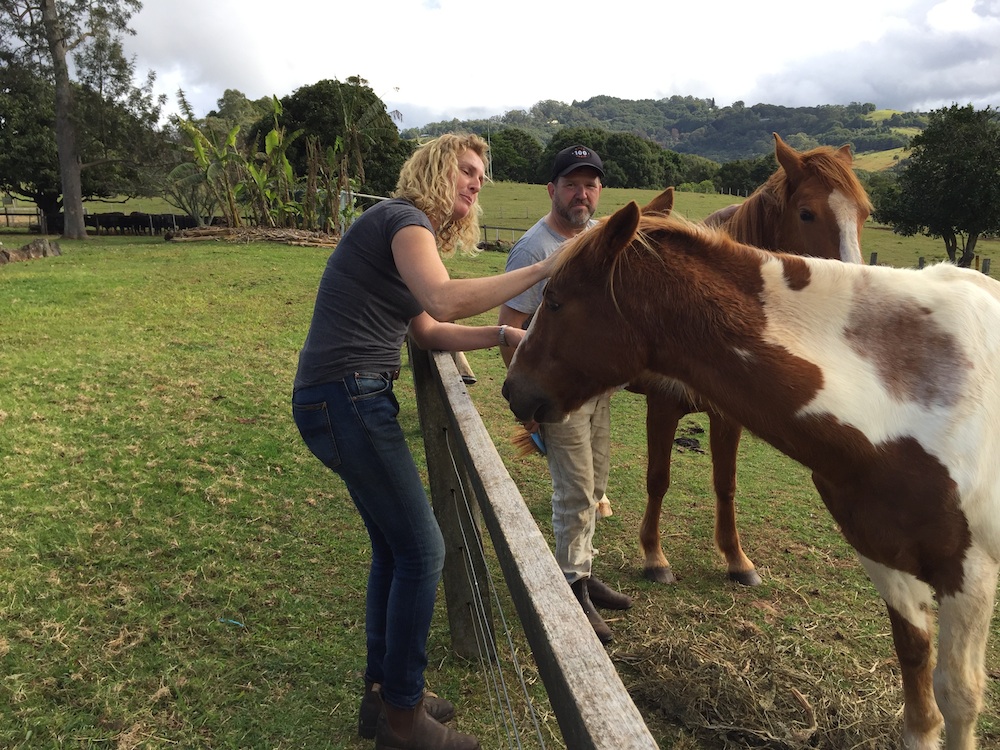 Alison and Greg with the family’s horses.

The family’s team ethos has been founded in sport, which, says Greg, “is very much a part of our DNA. The farming’s a team sport. We’ve grown up being team sport players, and we’re a great team on the farm.” He discovered rugby in high school and has played it ever since, becoming a veteran at Bangalow, where he aims to reach the 200-match mark next season. Alison played netball competitively and is president of the Mullumbimby Netball Association. The girls all play the netball and basketball, representing Trinity Catholic College in Lismore and playing in other local leagues. But Aubrey’s flying the nest has been a wake-up call, prompting a plan to “zen” activities. “We realised we only have five years before all the girls are gone,” Greg says, so the plan for 2017 is to focus on family – “what the girls need us for” – rather than explore fresh avenues.

“We’ll concentrate on growing the core production lines,” says Morley, which is good news for the region’s foodies. The girls have spent most of their lives on farms and are not squeamish or sentimental about the animals’ fate. Morley says it would be worse if the cattle and pigs had not had a good life. “That would be sad but here there’s lots of space for them; they’re naturally fed, and handled constantly,” she says. Even the pigs are periodically allowed to roam freely in pasture.

Becoming farmers has been a “very, very steep learning curve”, says Alison. “We made every mistake in the book in the early days,” she says, including losing all their cattle in the bush – rescued by neighbouring “real farmers”, who have offered unfailing support.

But he knows his other business interests put him in a fortunate position – and acknowledges how tough it can be for many small farmers. The boot business is so successful the couple don’t have to work so hard, but they say it’s important for children to see their parents working – “it means they don’t take stuff for granted”.

And while none of the girls has plans to become a farmer, the earthy realism of life on the land has stood them in good stead for the world beyond Goonengerry’s green hills. They are all ambitious, confident, outgoing – and grateful for their good life.

As Aubrey says: “It means we know where our food comes from: knowing that, and the time and energy that has gone into it, makes it taste better.”

Go to the Cromwell Farms website for more information: cromwellfarms

A Beef and Pork Pop-Up Day is planned at the farm on December 19 from 9am-12pm. To recieve a 10% discount, mention Verandah Magazine. (Enter the code Verandah 10 on the website to receive a 10% discount on the Espresso Unplugged coffee maker and grinder espressounplugged).

The Lismore Symphony Orchestra has announced that local classical guitarist, Matthew Marshall, will soon be bringing a new dimension to the orchestra’s soundscape. Matthew,…