Let’s get it out of the way. Carnarvon Gorge is gorgeous. There. Now we can move on.

In all my years in Australia the closest I’d been to the gorge, which is hidden in the rugged ranges of Queensland’s Central Highlands, was Roma, where I’d spent my twenty-first birthday looking unsuccessfully for a phone booth to ‘phone home’ to the UK. These days Roma is about the last spot – apart from the small town of Injune – where you can get mobile reception before you face the last narrow 150 kilometres of road liberally peppered with mining trucks, and the final 22 kilometres of dirt which take you into the gorge itself.

I hadn’t expected to see emus but as we reached the final stage of our 12-hour drive, there they were, a mob of them grazing on the sunlit plateau surrounded by the massive sandstone cliffs that are the only hint of the wonders to come. As we wended our way across the flat brown landscape with its cattle grids and creek crossings it seemed impossible to imagine that we were about to descend into one of the most varied and verdant landscapes in Australia, a place that is also home to some of the country’s most important and accessible Aboriginal rock art. 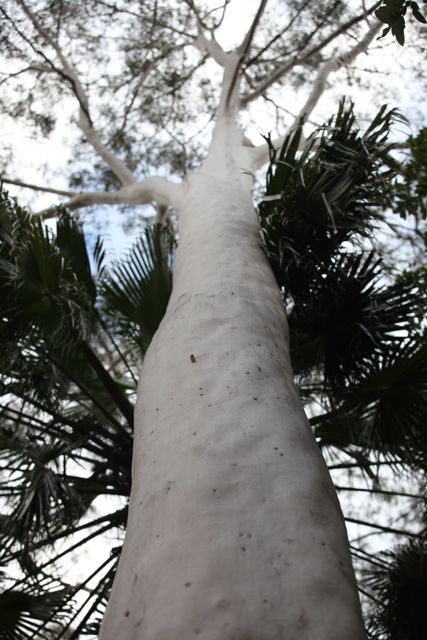 Just one of the massive eucalyptus trees that grow in profusion through the gorge.

It started simply enough, the odd palm dotted here and there, the plain giving way to folding hills, until almost imperceptibly the dusty beige and olive greens gave way to lush rainforest colours, with towering eucalypts, cycads, ferns and palm trees as far as the eye could see.

We had decided to camp in the National Park camping ground, next to the river and right at the start of most of the walking tracks. As we pitched our rooftop tent with the sounds of the river and a symphony of bird noise in the background, I couldn’t wait to start our bush-walking adventures. Walking is what the gorge is all about, and it’s the walks that attract approximately 65,000 visitors per year – many of them from overseas – to this relatively remote National Park. 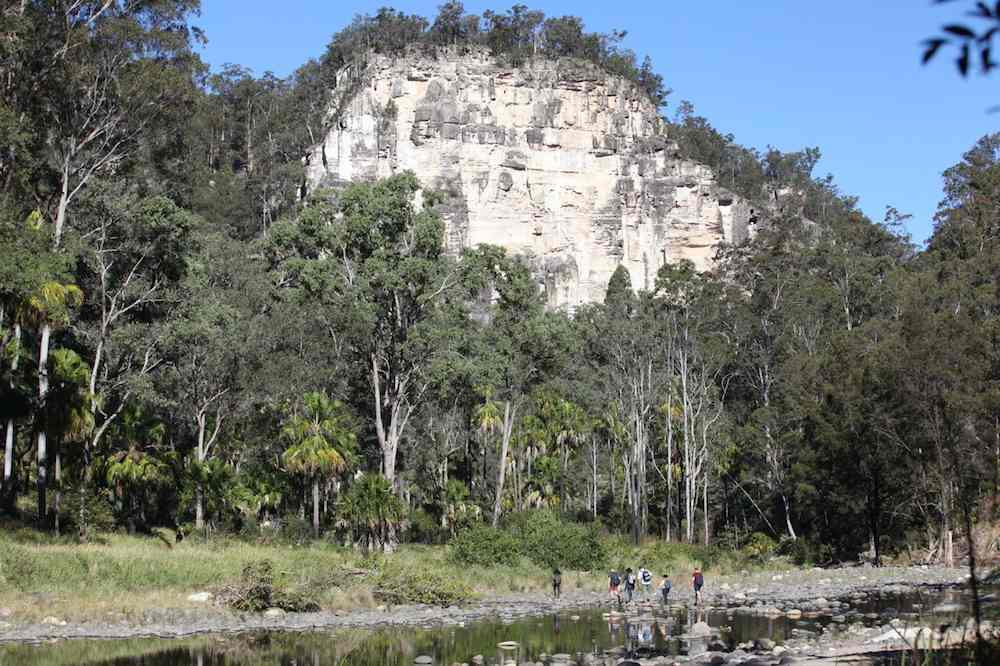 If I’d thought that the dusk symphony was loud it was nothing in comparison to the dawn chorus. The Gorge has populations of everything from Brolgas to Fairy Wrens including many birds on the endangered list. On the bird list were some species I’ve never heard of – the wonderfully named Bush Thick-Knees, the Buff-Rumped Thornbill and the Pallid Cuckoo just a few examples.

The 35-kilometre gorge was created by water erosion through the soft sandstone over millions of years, and with the riverbed as the main feature, it’s easy to follow the walks, which run off to the sides taking detours up into hills and gullies, revealing such natural wonders as the Aboriginal Rock Art Gallery, Ward’s Canyon, the Amphitheatre, the Moss Gardens, Cathedral Cave and Big Bend.

We decided to try and cover the first three of those on our first day out, which turned out to be a little ambitious for two Golden Oldies, but we managed to walk the 14km round trip in about six hours, and it was definitely worth a few arthritic twinges. 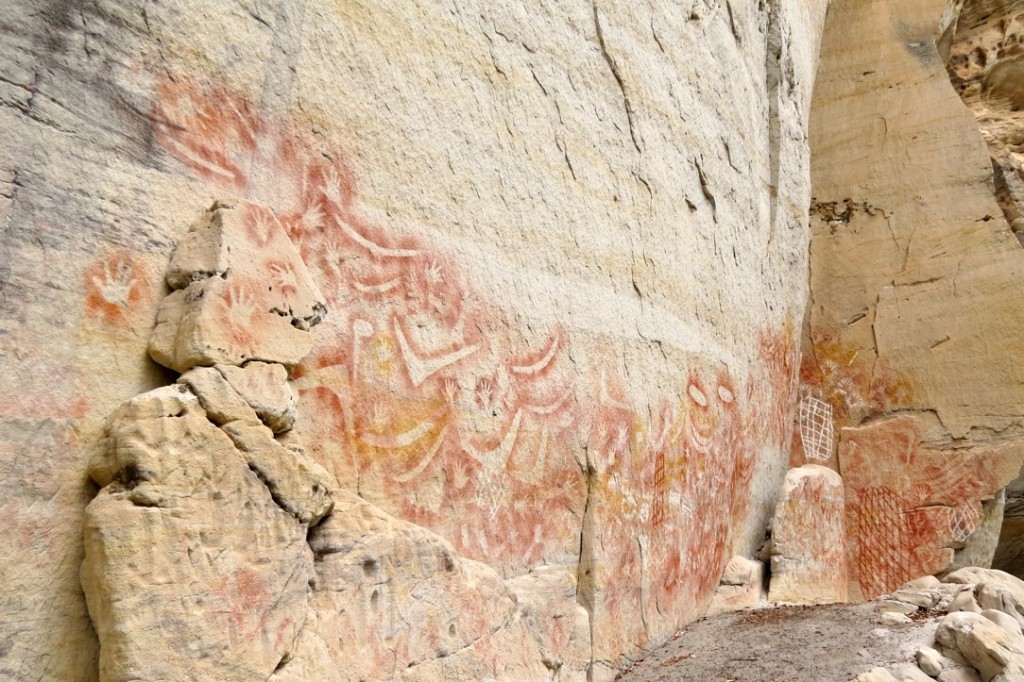 The Art Gallery: nature, beauty, history and humanity all in one place.

Our first stop was the furthest away – the Aboriginal Rock Art Gallery, about six kilometres away from base camp. It’s hard to describe the overwhelming feeling of standing in front of a wall of stencilled hands, many of the them children’s, and knowing that they date back thousands of years. These distant ochre messages from the past – with the constantly repeated themes of boomerangs, emus, kangaroos, and body parts, along with the patterns of carved vulvas – seem as fresh as the day they were made. Personally I would have loved to have had more written knowledge at the site on the Bidjara and Karingbal cultures, the main occupiers of the gorge prior to colonization. This site and also the one at Cathedral Cave, are of international archaeological and anthropological importance, with examples of stencilling techniques considered to be the most sophisticated kind in the world.

Our next stop was Ward’s Canyon, the most sheltered location in the gorge. Stepping from the bright sunlight into the dark, cool damp of the canyon I could see orchids and ferns growing around the rocks. I’d been told that the canyon was home to the extremely rare King’s Fern – one the largest and oldest ferns in the world, with fronds that grow up to five metres long and two metres wide, but it wasn’t until I’d got right to the top that their full magnificence was revealed – the cool, damp environment perfect for their survival. In fact so cool and damp is the canyon that it acted as a natural refrigerator, and is named after the Ward brothers, two fur trappers, who used it to store their bounty in the late 1800’s, when the Indigenous population were finally losing the battle to keep hold of their country. 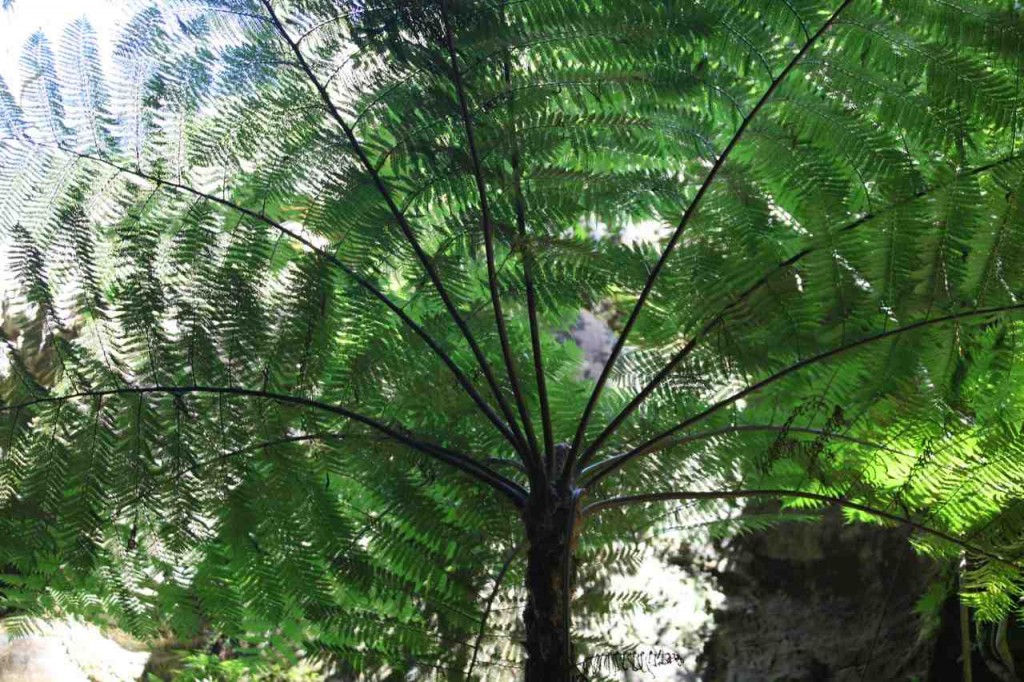 A King Fern in Ward’s Canyon, and above, stones in the canyon’s trickling creek.

Our lunch stop was in another place of wonder – the Amphitheatre, a gigantic natural hole carved by water pressure over millions of years into the rock, which is only accessible by a series of steep ladders. The vegetation in the amphitheatre is up against it – torn literally from its roots by the irregular but massive floods that sweep through it (and through the entire gorge, taking out entire trees and parts of the river bank with them). It was impossible not to test out the natural acoustics…I was just glad there was no one else there to hear.

The Amphitheatre in the Gorge – impossible not to test the acoustics…

I spent the next few days in a state of bliss – doing the shorter walks along the river near the campsite, (on one of them I was kept company by a huge grey boomer), and the walks that started a short drive from the camp. Cold at night, it was warm and sunny during the day, and our few days there had the patina of perfection.

There was a wide variety of visitors – from groups of international backpackers, elderly couples (many of them birdwatchers), and families of all kinds, many with tiny children, who, even if they are not up to the more strenuous walks could easily enjoy the river walks near the camp, and the campsite itself. But despite the amount of us there, once we were on the tracks it wasn’t long before we were on our own again, and those moments were euphoric. It was easy to understand why the entire gorge was a sacred place to the Aborigines. With the combination of the art from centuries before, the bird noise, the flora and fauna, and the massive riverbed and cliffs, it’s hard to imagine a more impressive testimony to the power of nature.

Do yourselves a favour and put Carnarvon Gorge on the bucket list. You won’t regret it.

Carnarvon Gorge is located 593km northwest of Brisbane, or 240km from Roma. You can travel there on a five-day Outback Explorer tour with Sunrover, drive (a 4WD is not necessary since once you get to the camp, you’ll be walking), or fly to Brisbane or Roma and hire a car, caravan or motor home. It took us 12 hours from Bangalow, in northern New South Wales to the camping ground.

Visitors can camp at the National Park site, which is at the mouth of the gorge, but only open during Queensland school holidays; see https://www.nprsr.qld.gov.au/ or stay at the more up market Carnarvon Gorge Wilderness Lodge a few kilometres away; see https://www.carnarvon-gorge.com/ or at the larger Takarakka camping lodge with its mix of cabins, safari-style tents, caravan spaces and camping; see https://www.takaru.com.au/takaru/splashpage.cfm

March – October are the peak season, and the best months for walking. Apart from a small store at Takarakka, there are no shops so stock up well on provisions, although Takarakka and the Carnarvon Gorge Wilderness Lodge both have cafes. The National Parks don’t recommend visits to the gorge in high summer, the Carnarvon Gorge Wilderness Lodge is closed during the off-season, and Takarakka is open all year round, although visitors during those times are warned to be careful of the heat, and also of the rains, which can bring flash flooding. Whatever the time of year take warm and cool clothing.