It’s only a couple of hours up the road from Byron, but Tamborine Mountain is a whole world away, writes Candida Baker.

It seemed like a good idea at the time. Get away for a winter weekend’s camping, somewhere deep in a national park. No phones or computers, just bush-walking and meals cooked over an open fire. But we hadn’t counted on the rain in the Northern Rivers continuing for weeks – months, even. The last desperate call to a bed and breakfast in the Border Ranges giving us the unwelcome information that the area had received over 200mls of rain in five days. Which was mind boggling to imagine. “It’s a bit wet underfoot,” said Betty, my information source, in a classic understatement.

So what to do? Itchy feet, a free weekend, all dressed up and nowhere to go. Surely I thought, somewhere not too far away there had to be a place we could take time out where we could stay dry? Was that too much to ask?

Then a thought popped into my head. I’d recently driven over the beautiful Tamborine Mountain, and I’m ashamed to say that after 14 years of living near Byron, I’d actually never visited Tamborine, but I do have a friend who lives there. Fiona, I thought, just might know somewhere we could stay, and instead of our wilderness weekend we could swap it for a weekend of mountain village life. 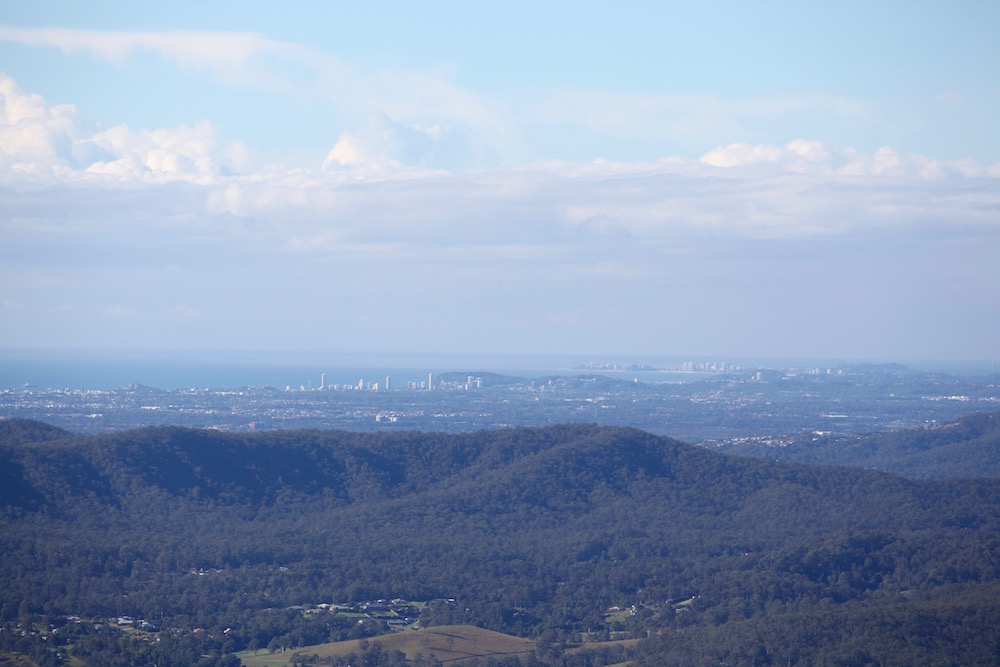 Which is how we found ourselves on a Saturday morning arriving outside the Villa Margaret  a gorgeous red-brick home, rumoured to have been designed by Burley Griffin, three-storeys high and surrounded by autumnal vegetation. It was almost magical stepping through the wrought-iron gate with its tinkling bell into this gracious home, which has been lovingly restored by its owners.

The owners have stayed true to the house’s original date of the 1940’s, decorating in an understated art-deco theme which runs throughout the house. We had the house to ourselves for the weekend and for us, the downstairs floor with its bedroom, bathroom, the kitchen and the living room with its open fire-place was plenty of room, but this house is a perfect mountain place for families. Each storey has a bedroom, bathroom and sitting or small kitchen area – the top storey boasts the most incredible views all the way to the Gold Coast, and has its own Juliet balcony; the middle hosts the library and a telescope, a private writing space, bedroom and bathroom, and the downstairs the general living, including a long dining table, and a generous kitchen equipped with espresso machine, and everything you need to cook up a gourmet storm after visiting all the local produce purveyors. 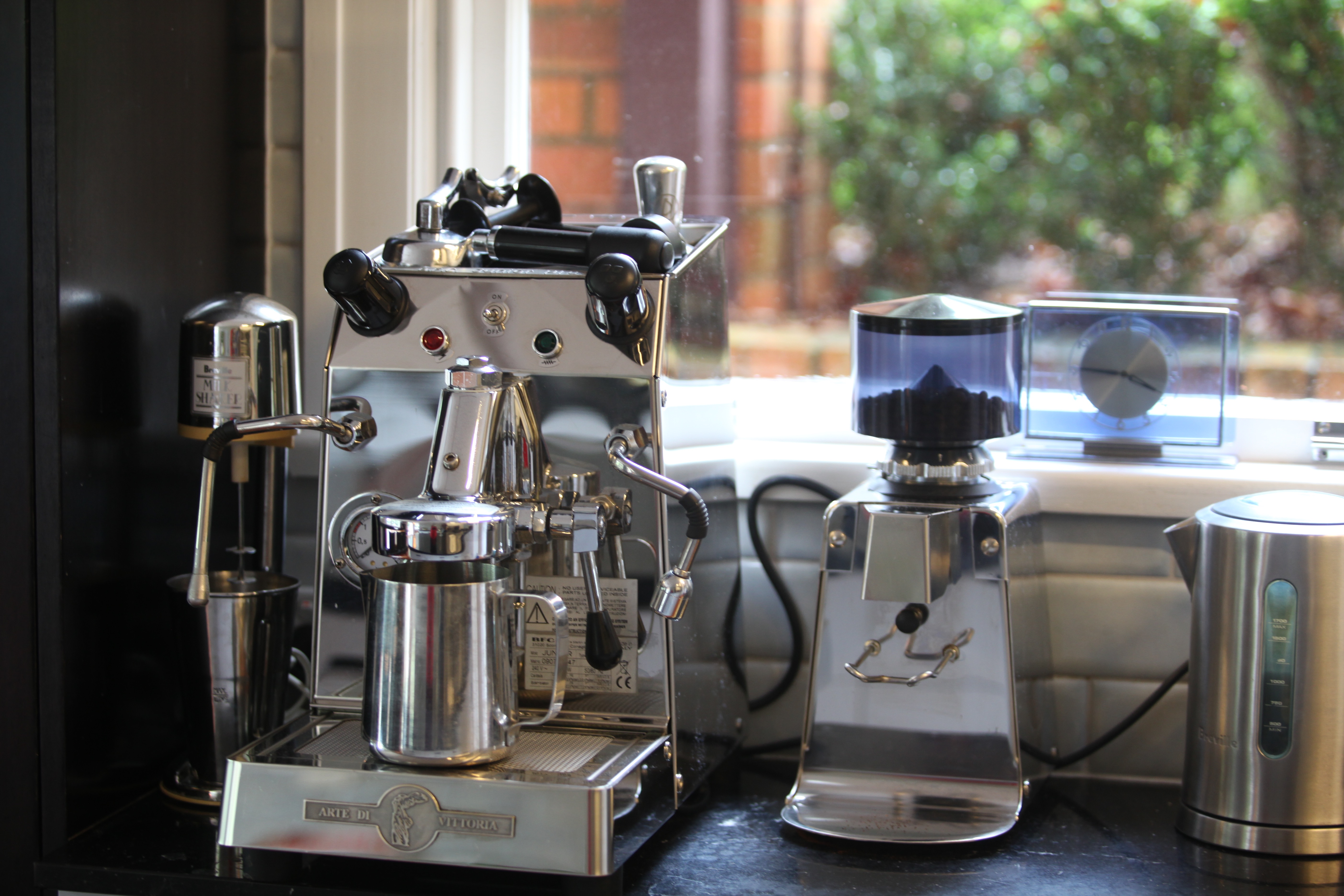 Coffee shops – or coffee at home?

Fiona Porteus, the miraculous provider of the accommodation lives right next door in the Old Blacksmith’s cottage where she makes her range of Old Blacksmith’s jams and preserves, (www.facebook.com/theoldblacksmithscottage/) so it seemed only right to start our mountain adventures with a cup of tea in her beautiful little cottage with its cosy slow-combustion stove, and port-soaked figs simmering on her stove. 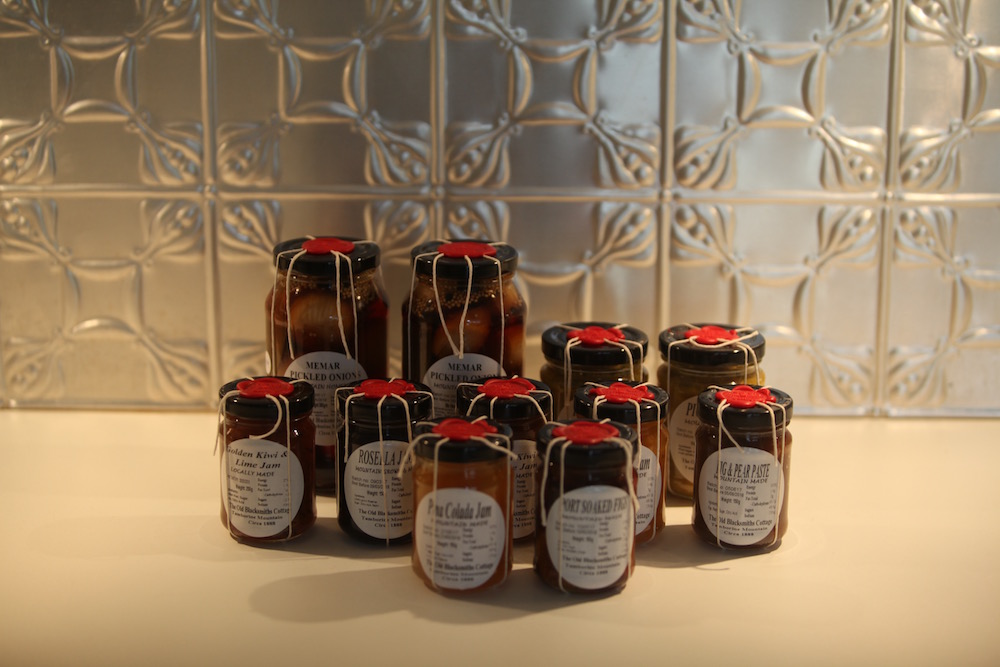 Produce from Fiona Porteous at The Old Blacksmith’s Cottage 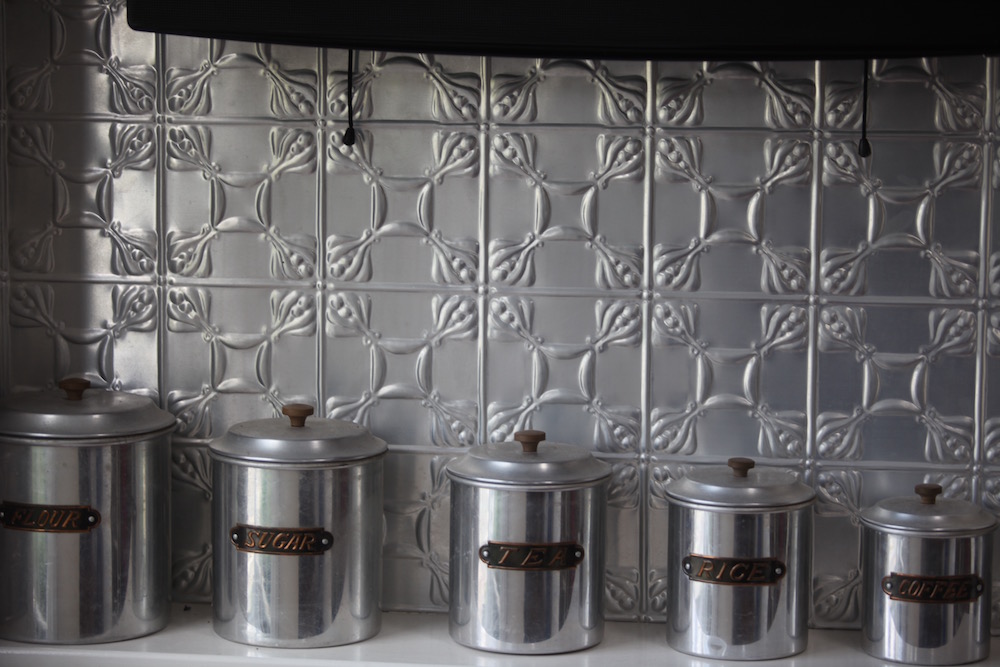 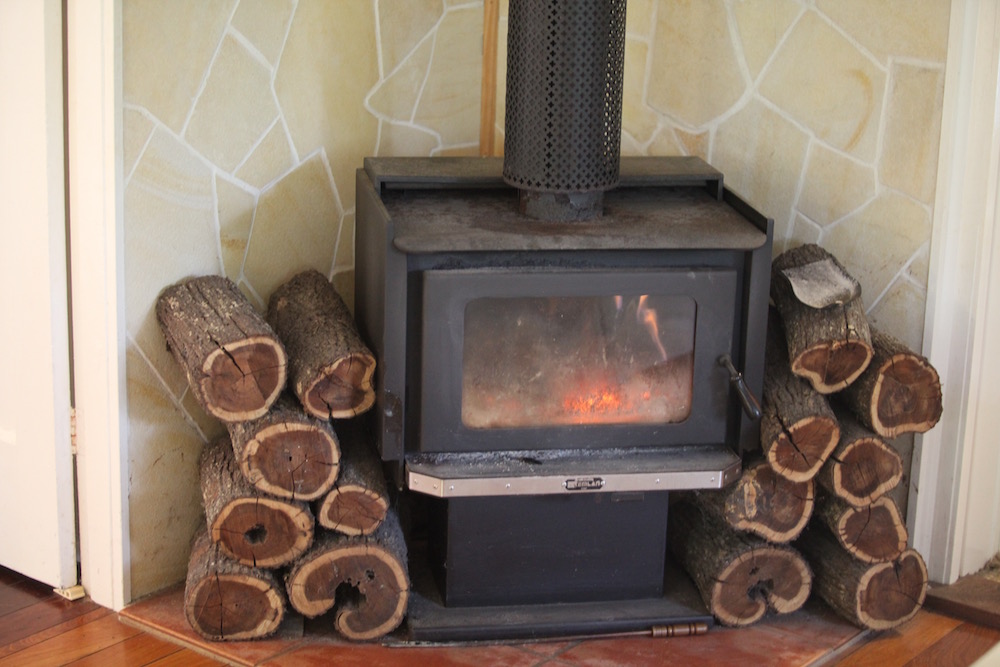 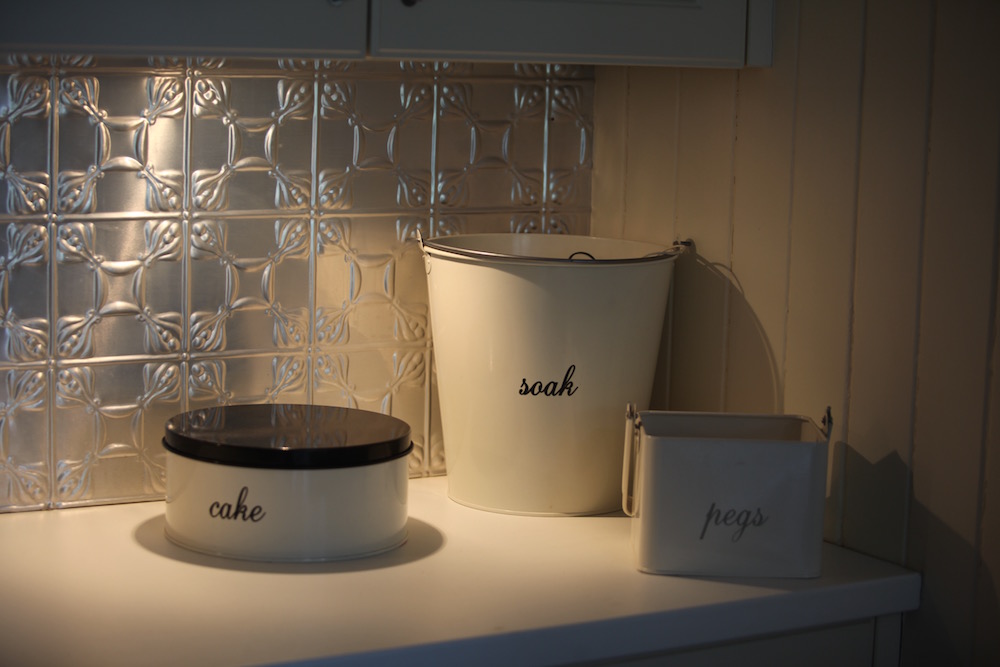 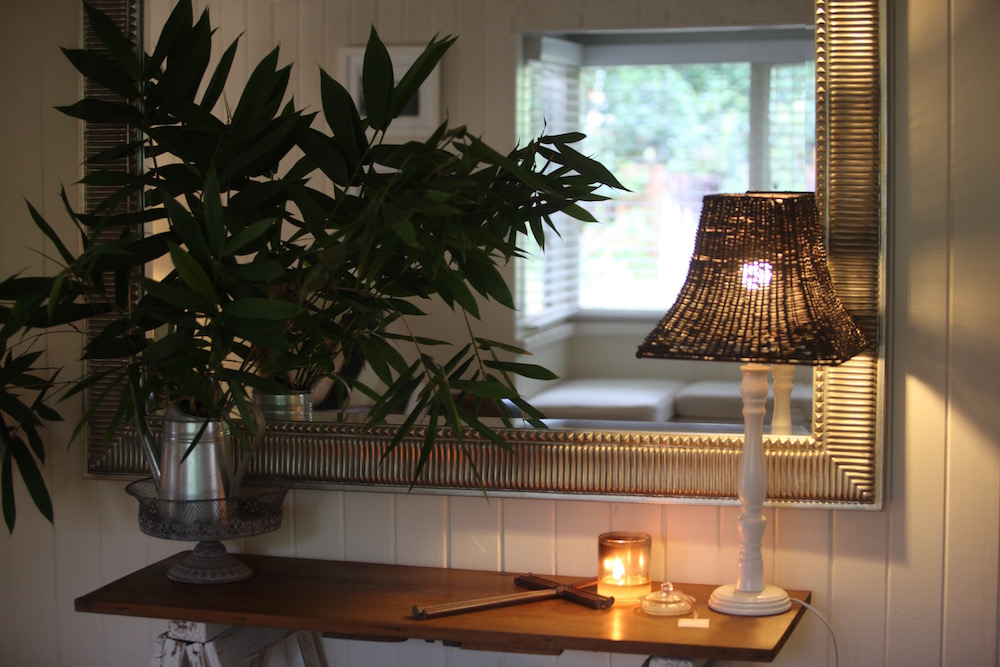 The Old Blacksmith’s Cottage – a beautiful renovation of a local landmark.

And so began one of the most relaxing weekends I’ve had in a long time, although it has to be said that we hadn’t exactly escaped the rain, but sitting in the Mt Tamborine winery with soup, warm damper and a fire was just a tad more pleasant than being in a rooftop tent.

We decided that our accommodation was so beautiful there was no point in going back out for dinner so we hunted and gathered at the local supermarket, and headed back to light the fire and settle in.

Googling Vila Margaret didn’t confirm whether Burley Griffin had designed the house, but it did throw up some interesting facts. During World War II the house was the weekend getaway for General Douglas MacArthur, and also for the longest serving Catholic Bishop, the revered Archbishop of Brisbane, Sir James Duhig. Decades later the house became a contemplative retreat for the Sisters of the Canossian.

The history suited the house – its solid exterior with its bay windows and balcony, its generous rooms, and quiet places to sit and read or contemplate, made it easy to let the everyday worries of the world drift away. With its three almost self-contained storeys, it’s a perfect place to stay with two or even three families, and it’s listed on both Airbnb and Stayz.

On Sunday morning we woke to a brave new world – one in which the sun shone so brightly it was almost a shock to the system after our weeks and weeks of rain. 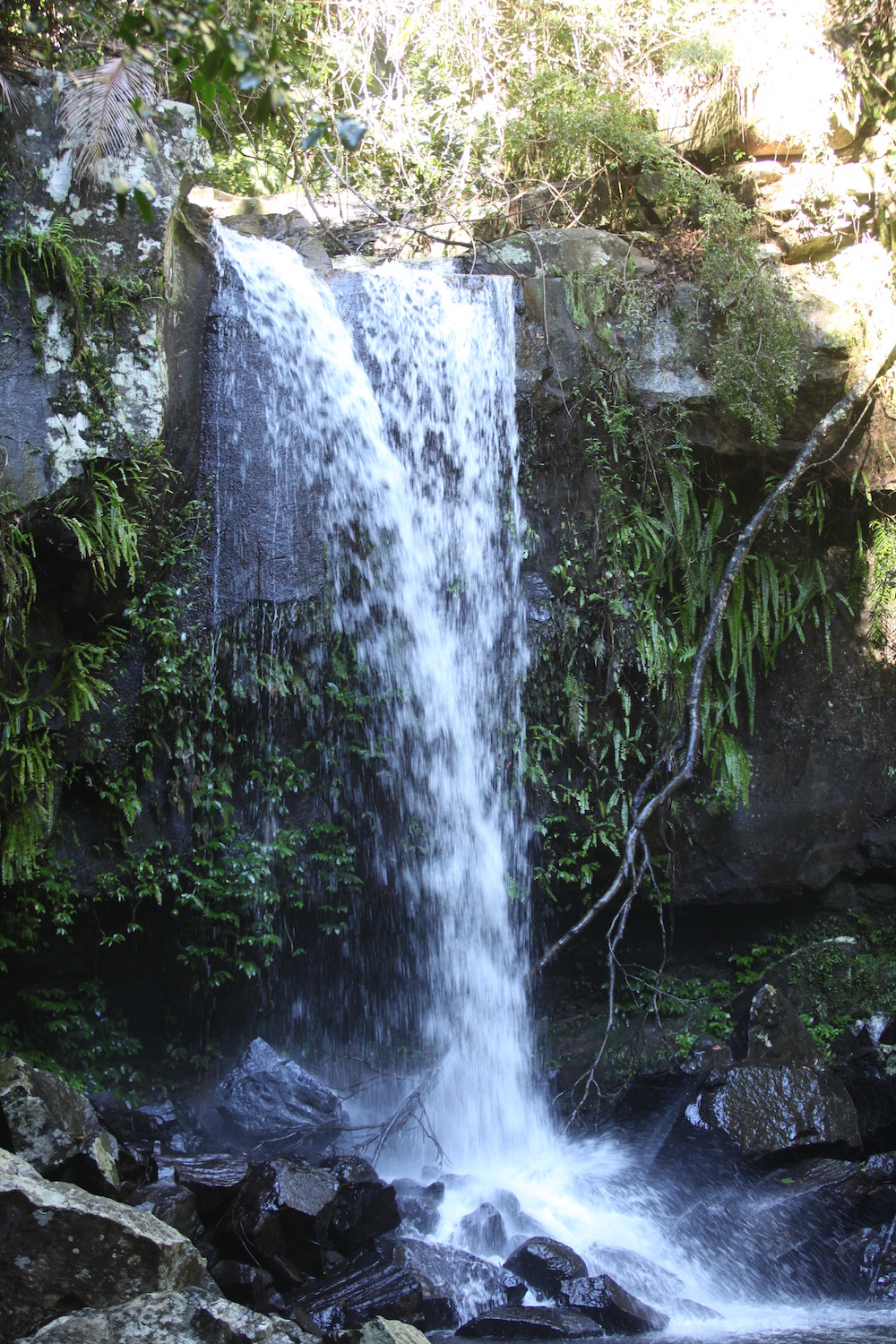 Curtis Falls – a gentle stroll to sart the day.

Everything sparkled – the misty Payne’s Grey mountain of yesterday was emerald and blue, with startling splashes of colour from darting parrots and winter blooms. It was a perfect day to explore, and so we did – starting with a modest short walk to the nearby Curtis Falls and the local shops. I’d read about the Skywalk – a metal walkway 40 metres above the ground through the rainforest, and although it did suggest that if it was windy and you were scared of heights, to steer clear of it, on a windless day it was a perfect way to see the canopy. So with one of us (me) praying that the lack of wind would continue we set off on the 1.5km Skywalk, which was everything we’d hoped. From our vantage point in the trees we could see orchids and stag ferns, butterflies and birds, and the hanging trail of vines reaching down, while the trees seemed to be stretching for the light. A creek meandered through the forest floor, and the light was a photographer’s dream. If you only have limited time on Tamborine, I would highly recommend the Skywalk. 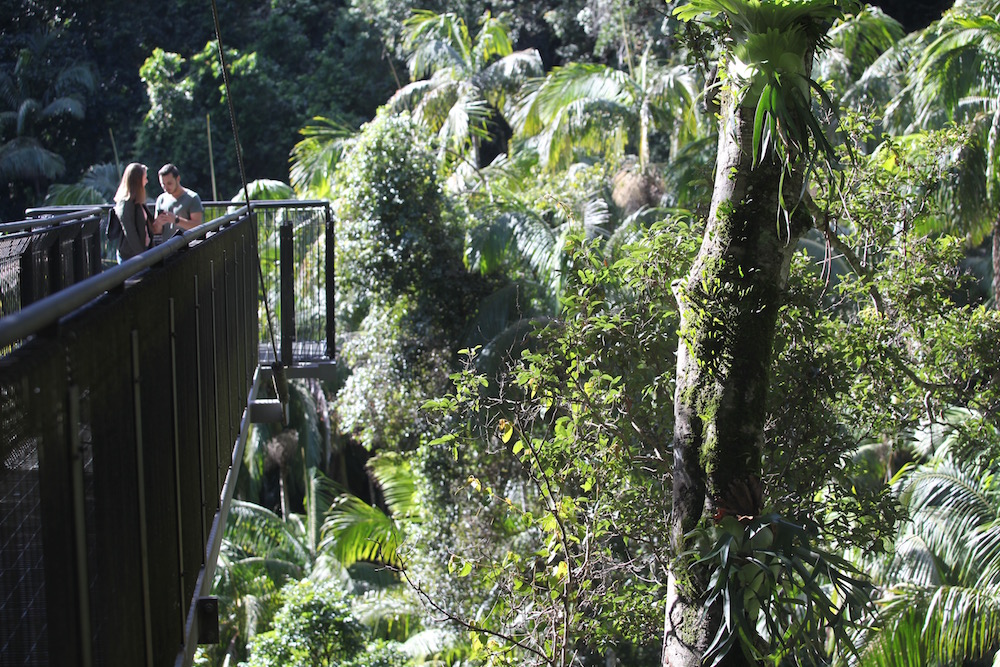 The Skywalk – 40 metres up is a great way to see the rainforest.

Two walks – time for lunch, and where else on Sunday but the Cheese Factory, the uber-cool eatery complete with restaurant, separate bistro, a cheese and wine shop and the cheese-making factory. By 12.30 it was already packed, but we found a table – after a serious amount of cheese-tasting and were joined by Fiona – who introduced us to Meredith Morris, the owner of the Cheese Factory, and Michael Reeves, the cheese-maker. Michael, originally from the UK, emigrated to Oz with a swag of accolades including being awarded the Most Consistent Cheesemaker in the West Country and, most impressively, Best Traditional Cheddar in the world.

“I worked my way up from the packing room floor,” he tells me while we try some of his hand-made specialities accompanied by the bistro’s palette of beers. “But even though my cheddars were really famous in the UK, I’d actually never made soft cheeses before I got to Australia, so it was a steep learning curve.”

The curve worked in nicely with the increasing popularity of the Cheese Factory as a weekend dining spot, and for Meredith it’s a chance to have a place that showcases not just local produce but high-quality cheese from around the world.

“We want customers to come here and have great food and beverages, whether it’s pizza and beer or a gourmet meal, or a tasting plate of cheese and a beer palette,” she says.

We felt it was our Sunday lunch duty to try as much of as many things possible, and thanked our lucky stars that the house was only a (slightly wobbly) short drive down the street, were being horizontal for at least an hour seemed like a seriously good idea, particularly since Fiona, who seems to have boundless energy, had decided that I should do the Palm Grove National Park walk since it was right below the house. 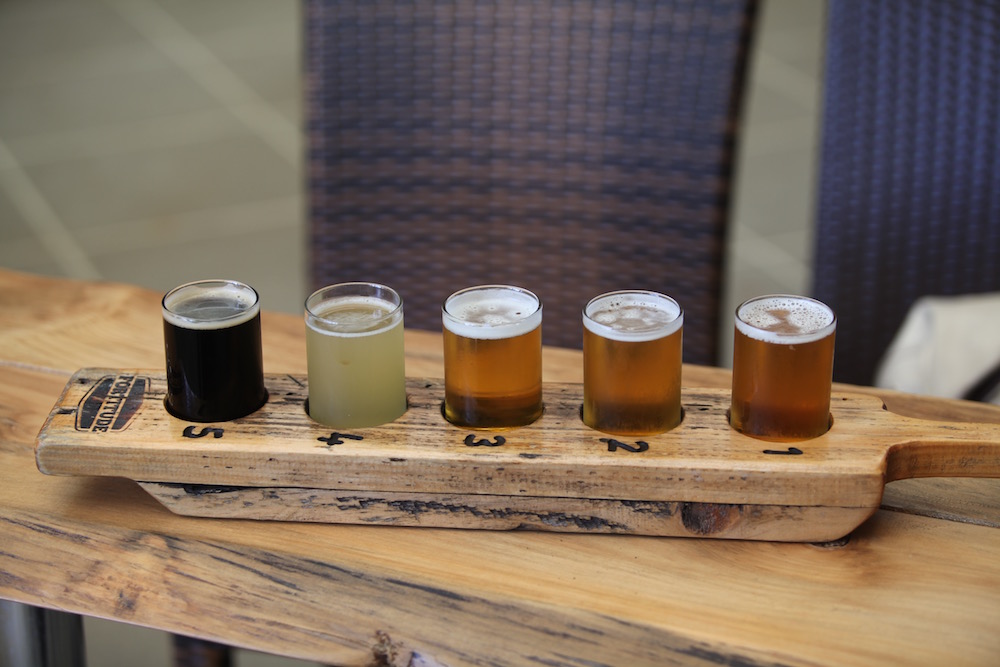 A tasting palette from the Cheese Factory

So armed with gumboots, long socks and salt (for the leeches) we headed off into the rainforest once more, this time with nobody to disturb the peace, and fortunately no leeches either. The walk – a leisurely 40-minute stroll took us over creeks, and through massive groves of trees, while around us the birdsong was a natural symphony. Fiona’s daughter, Alexis, who is the Environment Officer at the local school, pointed out different plants and vines, and at one point we plunged a little way off the path to find a hidden old logger’s hut, abandoned over a century ago, but still intact. It was moving to stand in the filtered late afternoon light, and wonder at the lives that had been lived there, absorbed now into the rainforest with no trace of their daily comings and goings.

The walk brought us back up at the bottom of Palm Grove Avenue and we walked back along the road towards the house and Fiona’s cottage where it was time to make a choice from her wonderful range of goodies to take home and loaded up with jams and the port-soaked figs, we headed back for our last night.

To contact Fiona Porteous at The Old Blacksmith’s Cottage go to: www.facebook.com/theoldblacksmithscottage/

For more information on Villa Margaret go to: villamargaret.com.au/