If you’ve ever thought you were too old for riding lessons, head down to the Byron Bay Equestrian Centre on a Friday morning and you’ll see something inspirational, writes Verandah Magazine publisher Candida Baker.

I feel a bit ashamed of myself to be honest. I think it was about four years ago, in my late fifties, when I began to complain a bit about a slightly arthritic right hip that was preventing me from hopping on and off a horse in quite the style I’d been used to, and I started to talk about whether it was time to give up riding altogether.

But recently I met Janet Edgerton, and I have to say – I’ve been somewhat silent on the subject of riding, and ageing, because at the age of 75 (it was her birthday a few weeks ago), Janet is riding on a weekly basis, and not only that, but she came back to it after a 36-year-break.

I’m standing on the sidelines of the arena at the Byron Bay Equestrian Centre watching Janet and her fellow rider, Beeb Fleetwood, a mere 64, going through their paces on two of Tesse’s most precious horses. Beeb is on, Junior, a somewhat ironically named massive 16.3hh warmblood, and Janet is on Lucy, Tesse’s own personal Percheron.

As I watch, Janet urges Lucy into a canter, and Tesse is giving her encouragement. “Keep your leg on,” she urges, “don’t let her fall out – well done!” 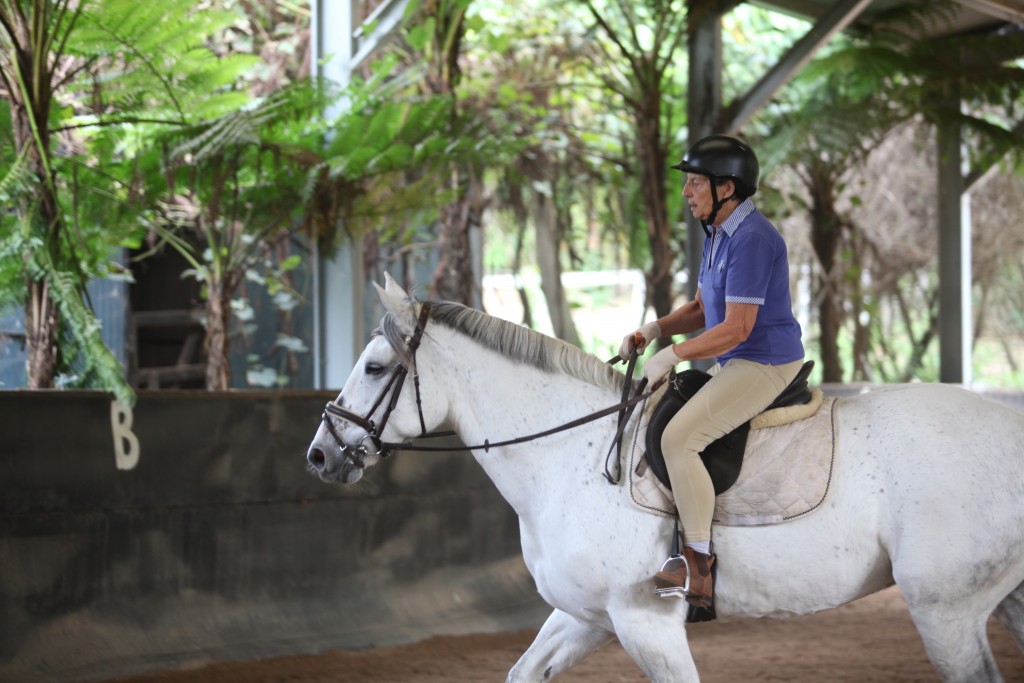 Janet Edgerton on Lucy at their regular Friday lesson.

I’m catching the end of the lesson and Beeb and Janet are going through their final paces. I’m impressed, not least because I suspect I wouldn’t last 20 minutes without gasping for breath, but afterwards when I talk to Janet about her late re-entry into her best-loved hobby, I’m not surprised at how fit she is. “I ride every week,” she tells me, “but I also ride my bike, do a one-kilometre swim a couple of times a week, and play badminton twice a week, so I’m pretty healthy and fit.”

Pretty healthy and fit doesn’t even begin to cover it really – but I do wonder why Janet came back to riding after so many years away from it.

“I grew up in England with horses,” she says, “we were into hunting and showjumping, and I competed until I was in my twenties, and rode until I was 37. But then I met my husband over in the UK, who was Australian, and we had three children, all of them born over there, and life just simply got too busy. He was keen that we try living in Australia and so we moved here in 1984.”

At first Janet wasn’t sure if Australia was for her. “It took me about a year to settle in,” she says, “it was so different. We settled up near Pottsville, but somehow life was so busy there never seemed to be time to ride or get into it properly. It wasn’t until a couple of years ago that I was talking with Beeb about her lesson down here, and she suggested that I come along.”

Janet took her time – checking out the centre, and watching a couple of lessons, until in March last year, she had her first half-hour lesson. “I took to it like a duck to water,” she said. “I do think it’s a bit like riding a bike – you never forget. Now it’s a highlight of my week and I really look forward to coming down and sharing my lesson with Beeb.” 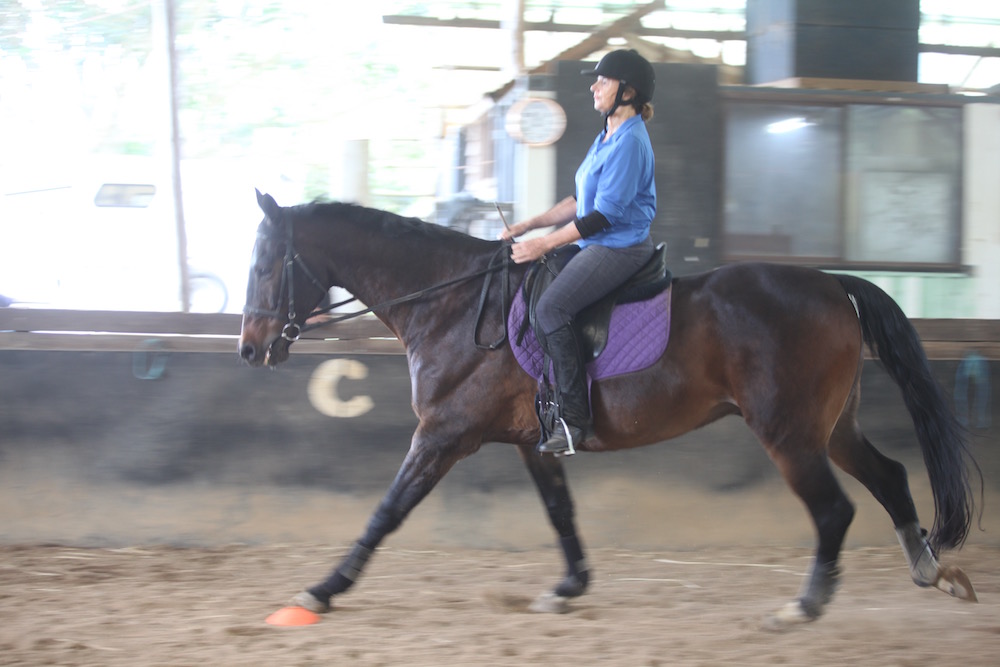 Beeb Fleetwood, Janet’s lesson partner, also came from a horse background. Beeb grew up on a farm in Western Victoria, and like many kids do, started off small. “I learnt to ride on a Shetland pony, as you do,” she laughs, “and I progressed through Pony Club and onto bigger ponies and horses. I continued to ride intermittently on the farm into my teens and twenties, and then when I was older started doing some trail riding in the High Country which I really loved. Later on I did a bit of Adult Riding Club, and I also used to have lessons, but for me it was always more about the trail.”

Despite her love of trail-riding though, what prompted Beeb to go to the Byron Bay Equestrian Centre was initially to ride with a friend of hers who was coming back to riding after a tragedy many years ago when her father had died after a fall from her horse. “I wanted to ride with this friend to keep her company,” she says, “but at the same time some friends of mine were beginning to go on these worldwide riding adventures and I really wanted to start doing some of them, but I’d always lacked a bit of confidence in my style of riding, so I decided that getting some lessons was a good way to improve my aides.” Beeb soon found a six-day ride in Sicily which she loved. On the ride, Beeb was in the saddle for six-eight hours a day, but thanks to her regular lessons she felt fit enough to handle it. “I loved it so much I’m going again,” she says. “I’m really hooked on the adventure of it.”

It was Tesse who suggested to Janet and Beeb (whose friend didn’t continue) that they have their lessons together and for both of them it’s been a rewarding experience.

And not just for them. “To see the pair of them so passionate about horses gives me something to look forward to,” says Tesse. “They’re literally my idols. When Janet first came she was walking on a horse for just five minutes, three or four months later I put her onto Lucy, my own horse, and the next moment she was thundering around the arena with the biggest smile on her face, and galloping as if she was on a hunt! She got severely reprimanded! But it was also very funny and entertaining. I’m so happy that her confidence has built up so much. Beeb had a lot of deep-seated issues with her parents telling her that she wasn’t good enough, and she’s physically improved out of sight. She has a beautiful natural seat and all the natural ability there – it was just teaching her that she had it, and she became an amazing rider.”

As for Janet, she’s got no plans to hang up her boots and spurs just yet. “I just feel that while I’m enjoying it, why not keep on doing it?” she says.

As I head home, I think of Elyne Mitchell, author of The Silver Brumby, who was still riding only a few years before she died at the age of 89. Time to put up or shut up I think to myself, after all, if I play my cards right, at the age of 62 I could have 20 years of riding left. Time to get going.

To contact Tesse Ferguson, owner and manager of the Byron Bay Equestrian Centre go to: byronbayequestriancentre.com

Four days ago, Ken Lay, former Chief  Commissioner of  Victoria Police and Chair of the COAG Advisory Panel on Reducing Violence against Women and…