It’s a time-honoured tradition – ‘mother-spit’.  But, writes Robert Drewe, it may just be falling out of fashion.  It may even just be ‘yuk’…

Two adjoining tables in a local coffee shop the other day: at one table sit two teenage girls; at the other is a mother and her small son. The boy has chocolate foam from his babyccino on his cheeks. His mother spits on a tissue and wipes one cheek; spits again and cleans the other cheek. The teenagers, aghast, burst into giggles.

“She actually spat on him!” says one girl. “Gross!” agrees the other. The mother reddens, looks bewildered, then angry, gathers up the child and leaves the cafe, muttering. The teenagers are still shaking their heads in disgust.

Are publically-spitting mothers now pariahs? I wondered, recalling the ever-ready damp hankie in the days before the existence of moistened tissue-wipes. In my childhood, every decent mother carried a hankie up her sleeve, down her cleavage or in her handbag — and a ready supply of saliva to go with it.

Mother-spit was used to eliminate Vegemite, milk and chocolate from youthful lips, and dirt and lipstick on cheeks. Mother-spit tamed cowlicks and flyaway hair. Mother-spit cleaned dusty shoes and conditioned your swimming goggles. If you’d been eating a Choo-Choo bar or drinking Milo, your mother needed litres of it. Back then, the American writer Erma Bombeck opined that new mothers were fortunately endowed with an extra spit supply, like milk glands, at pregnancy. 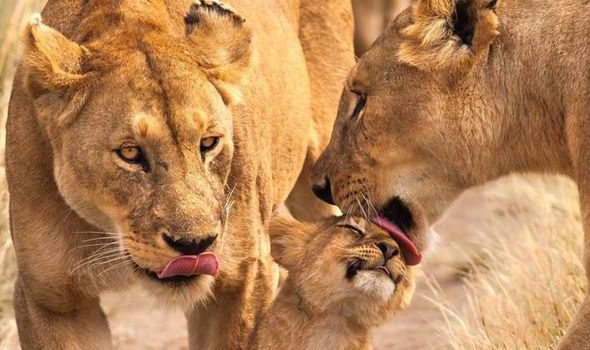 If it’s good enough for lionesses…

Did we children mind being smeared with maternal saliva? Speaking for myself — yes, a bit — but it was a “mother thing” and you had to cop it. But let anyone else do the hankie-spit routine (an aunt, grandmother or, even worse, a female neighbour or friend) and you couldn’t get to the bathroom quick enough to scour your face. Male hankie-spitters? They simply didn’t exist. A father would rather die than do it. They instinctively knew that father-spit was too disgusting for words. Besides, they didn’t care if you had a dirty face.

Sometimes, a grandmother, her feelings hurt by sullen resistance to her soggy hankie, and announcing that you were clearly “going down with something”, might attempt to restore healthy cheerfulness with an all-purpose remedy from her past: a big dose of castor oil or, worse, Hypol cod-liver oil. At the approach of the brimming fishy table-spoon, any child on earth would willingly turn back to that grandma hankie smelling of 4711 cologne.

At least cod-liver oil, in its modern form of Omega-3 fatty-acid tablets, has prevailed as a health remedy. I’m not so sure of Reckitt’s bluebags, for bee stings, or Ford pills, for constipation, although the senna would probably do the trick. (Forget climate change or asylum seekers, irregularity was society’s greatest concern back then.)

Then there were “Dr Williams’ Pink Pills For Pale People”. A combination of iron oxide and magnesium sulphate, they were still being advertised in the 1950s as a cure for “a pale complexion and all forms of weakness in male or female”. They would also fix your St Vitus Dance, nervous headache, palpitations, rheumatism, influenza, “male exhaustion” and “female troubles”. 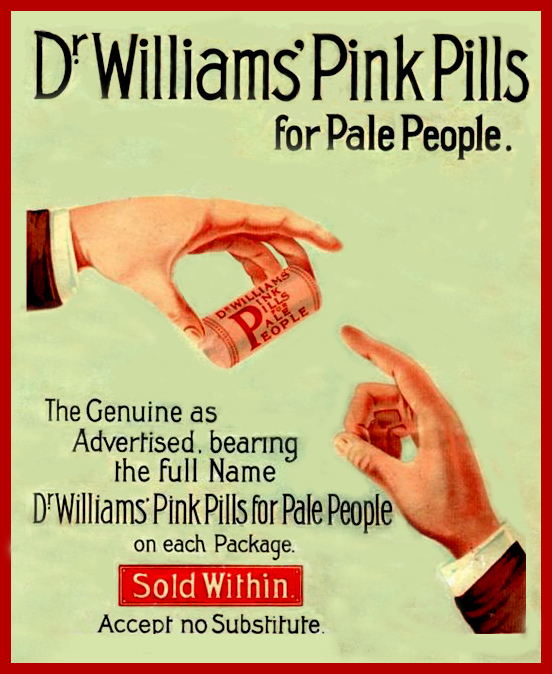 “Female troubles”, for some reason more prevalent in those days, were the focus of Bex powders as well, with thousands of Australian women in the 1960s being urged by advertisements to have “a cup of tea, a Bex and a good lie-down”, until it was realised that the aspirin, phenacetin and caffeine combination was causing widespread kidney disease.

Speaking of yesteryear’s remedies, whatever happened to good old flavine, mercurochrome and Condy’s crystals? In my childhood, Australian kids went proudly out into the world with their bare feet and legs painted the customary yellow, red or purple. Reef cuts, stubbed toes, ringworm, tinea, “school sores”, were all given the technicolour antiseptic treatment.

Feet took a thrashing back then when coastal kids went shoeless. Boys’ feet were painted so boldly with mercurochrome and flavine they looked like they were wearing bright red and yellow socks. As a six-year-old, I found these displays most impressive. Those blackened toenails, grazed ankles, blood-blistered soles, the ingrained dirt and festering reef-cuts criss-crossing their feet, proved a boy’s heroic acquaintance with reefs and searing sand, beach and bush, melting bitumen, bindies (or bindi-eyes), cliffs and broken glass.

It was a case for the bath and a stiff scrubbing brush. No mother ever attempted to spit-clean those feet.

There’s no doubt about it, The Farm – the latest must-visit place in Byron Shire, is a phenomenon.  The multi-faceted food-based business is drawing…