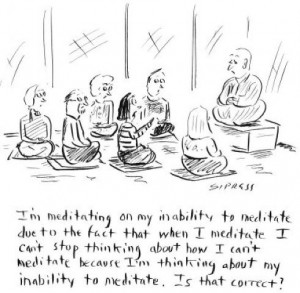 Glen Martin is a local acupuncturist, based near Lismore and in Byron Bay. One of his very first influences was the television series, Monkey. He talks about how ‘Monkey Mind’ affects us all.

Most people know of ‘Monkey’ – which originated from the classic Chinese novel-come-stage play, Journey to the West by Wu Cheng’en.  The book itself was based on the life of Xuansang, a seventh century Buddish monk from Szechuan in China who made an epic journey across central Asia to India in search of the true words of the Buddha Gautama.  Journey to the West was adapted into a movie, TV series, children’s book and even self-development guide. The superb dubbing into English of the cult TV show by David Weir may well have improved on the Japanese, because Weir took the Buddhist flavour of the storyline seriously and presented dozens of thoughtful quotations throughout our heroes’ journey.
I got hooked on Monkey when I was around four years old. For many country kids at that time there were only two channels to choose from, so the Goodies, Dr Who and Monkey were staple afternoon viewing. Monkey became my religion. David Weir’s words combined with the kung fu fighting and the magic somehow had an appeal for me that permanently affected the landscape of my mind. I’m glad, because after over 30 years of my own journey I can look back at the beginning and say thank you to David Weir for his inspired efforts to bring the true essence of monkey to life. 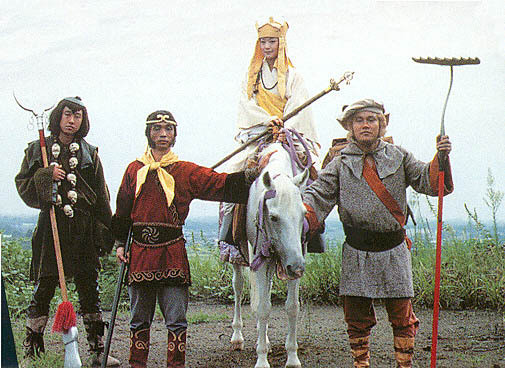 Sandy, Monkey, Triptaka and Pigsy off on their adventures

So in the here and now what’s happening in our bodies at the moment?

Well, spring has sprung and all that, and Chinese Medicine places spring in the phase Wood. A healthy spring combines surging forth with flexibility and good judgement.  This arises from a strong healthy Liver Qi and Blood after a good restful winter. Of course, this rarely happens, we become tired during winter from pushing through colds and flus, don’t have enough fuel in the tank and start feeling low in energy and/or get into weird sleep patterns, which further depletes the fuel tank.
People seem to have more nightmares in spring, especially around the full moon – and perhaps the King of Bad Dreams, as depicted in an episode of Monkey, is a metaphor for the part of our mind that infiltrates our sleep and creates havoc in our lives.  Is it this personal demon that needs to be overcome to sleep peacefully and wake refreshed and nurtured? If we look into The King of Bad Dreams episode we can see how our Monkey Mind can play havoc with our ability to stay calm.
The Country of Nightmares

In the 25th episode of the first season,  Monkey and his companions Tripitaka, Sandy and Pigsy, are on their way to India and they must pass through the Country of Nightmares, where every word is opposite and your worst nightmare will find you. The King of Bad Dreams only allows monsters and demons of all sorts through the Country of Nightmares, so even the gentle Tripitaka has to learn some magic to disguise his humanness from the King of Bad Dreams. To allow Tripikata to travel through safely, Monkey disguises him as a beautiful longhaired female demon and teaches him some basic magic. The King of Bad Dreams is a striking figure looking a lot like Luke Steel in his Empire of the Sun costume only with bright orange hair – his special implement is a bone stuck up his nose – quite the look.

What our heroes discover of course is that only a true heart and courage will see them through the Country of Nightmares, or as Monkey puts it: “Sometimes to fight evil is to strengthen it.”

If you are finding your Spring season unsettling, rest, eat well, hydrate and stay calm, so you too can pass through the Country of Nightmares.

Sue-Ellen Shortiss has just had an anniversary with a mixed blessing, after an accident  left her with permanent brain trauma, she writes for Verandah…