“Over the past year or two the most requested addition to our animal park were koalas,” said Gilding today, while he watched River, the first koala into the new enclosure, settling herself down to a big old feast of fresh new gumtree tips brought in that morning from Lismore.

“We’ve been working with the Friends of the Koala in Lismore,” Gilding said.  “They already have the gumleaves we need growing for the local koalas, and so we have a constant supply for River and Eliza.”

And boy, will they need a constant supply – approximately 200kgs a week according to Gilding’s reckoning. But trailor loads of gumleaves is a small price to pay for the permanent addition of the koalas, who recently made the journey from Taronga Zoo to the Macadamia Castle, as part of the Castle’s long-term direction to increase the native wildlife component of the Castle.

River’s new surroundings seem to meet with her approval.

“The sad fact is that koalas are under serious threat in the Northern Rivers,” Gilding said while we waited for Eliza to make her appearance.  “Their habitat is under constant threat, and we want to see the Castle play a part in educating locals as well as visitors about the importance of protecting such an important Australian icon.”

It wasn’t a long wait until the keepers reappeared with another massive travelling box, and after the member for Ballina, Tamara Smith, had done the honours, the door was opened, and within a few minutes Eliza took her first somewhat shy steps into her new abode.  It wasn’t long, though, before she was literally, a koala up a gumtree, and even though she and River were well acquainted at Taronga, a few exciting moments ensued while we were treated to them shrieking at each other like banshees and for an animal better known for its sleeping ability, a remarkable display of koala martial arts.  In fact, I had no idea that koalas could be so lively for so long. 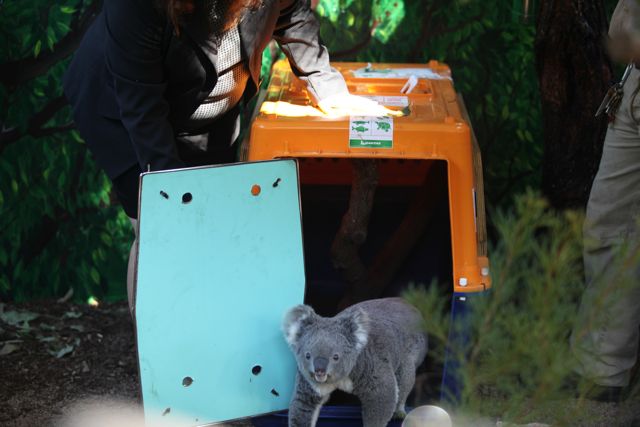 There’s another great initiative at the Castle too which is attracting attention – the brand-new ‘lodge’ – a self-contained cottage which can sleep a family of six.  Situated right next to the animal park, the rate includes park entry which means that families can go in and out as many times as they like.  Perfect family entertainment.

For more information on the Macadamia Castle go to: macadamiacastle

For more information on the accommodation go to: https://airbnb.com/rooms

What could be more perfect for a summer holiday recipe than something involving mangoes, writes Verandah Magazine’s resident food columnist Belinda Jeffery.  At the…