Tim Edwards has lived in Byron most of his life, but he’d never taken the short boat trip out to Julian Rocks to explore the underwater world that exists so close to the shoreline.

I am a reasonably strong swimmer so the thought of snorkelling off Julian Rocks, a world famous scuba diving location, several kilometres off the coast of Australia’s most Easterly point, Byron Bay, didn’t hold a lot of trepidation for me. Although I must admit that way back in the deepest recesses of my elderly brain lurked the knowledge that many years ago one of the dive boats that visited this site suffered the worst possible dive-boat nightmare…the loss of one of its customers to a huge white pointer shark.

I surf these waters regularly and I’ve seen a number of large supposed “man-eater” sharks but I’ve never been harassed by a single one. Additionally, I know that thousands of divers and snorkelers over several decades have taken the short trip to The Rocks and that one terrible loss has never been duplicated. As such, my miniscule spark of fear was hardly likely to grow. The trip was to be an adventure, that’s for sure, but not, I reasoned, an adventure that carried a huge element of risk.

I arrived at the Sun Dive base at 10.15 am as requested and was quickly fitted out with a decent full length wet suit, a pair of fins, goggles and a snorkel. I was then introduced to the boat captain, Chris Barstow and the dive instructor, Gaye Ingham, who would be leading the morning’s dive. A short briefing followed where the twenty odd participants in the dive were given information on where the dive would take place (the layout of the Rocks and its various underwater physical features), what they would be likely to see and given critical information about safety procedures that everyone was expected to observe. Most of those on-board were qualified scuba divers who would be taking in the underwater views from the bottom of the ocean while two others, along with me, would be bobbing around on the surface taking the snorkelling option. We were then loaded onto a minibus and transported to the launch location at The Pass, Byron Bay. 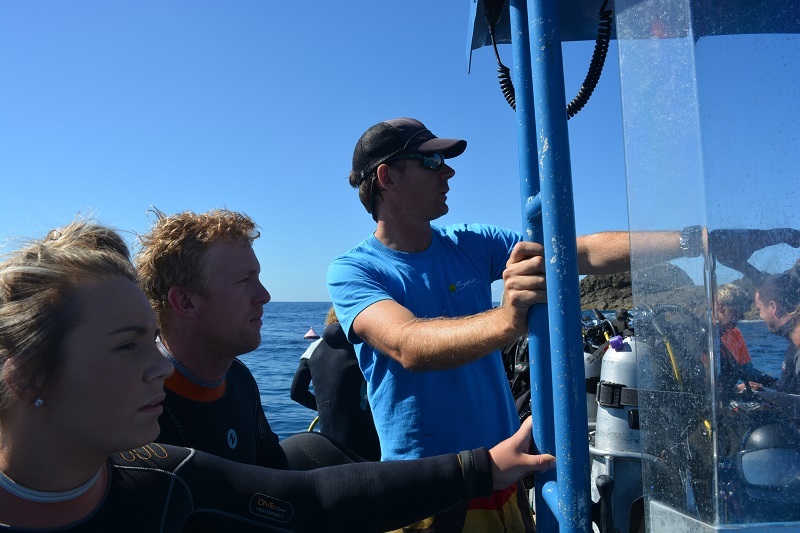 On a day when The Pass is offering up a bit of decent swell, the launch itself would be part of the morning’s adventure as the inflatable dive boat has to take on its passengers then negotiate a couple of hundred meters of heaving and churning breaking waves while avoiding the dozens of ever-present recalcitrant surfers who refuse to get out of the way. Unfortunately for us, or fortunately if you don’t like the idea of riding a rubber dive boat through breaking swells, the ocean was close to dead flat on this morning so the launch process was uneventful and not remotely exciting. Oh well. A bit of a rough ride might have been fun but the sun was shining, the air was cool, the wind was a gentle zephyr from the west and the ocean itself looked crystal clear and inviting.

Sometimes the tiniest little things turn out to be a delight when you’re doing something you haven’t done before. The thought that peering back at your hometown from kilometres out to sea might be really cool had never occurred to me before. But here I was in the open ocean speeding across deep ocean swells looking back at the array of Byron Bay beaches, the Eastern Cape, the town itself and the lighthouse and the feeling was deeply pleasurable. 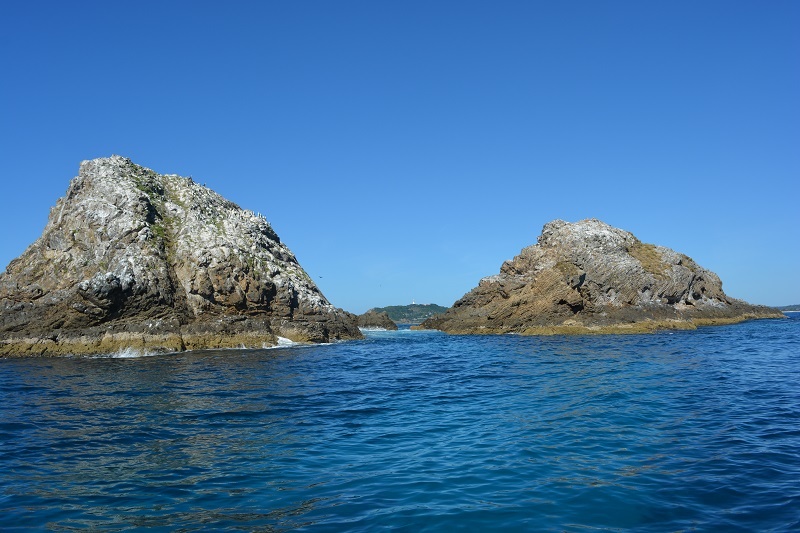 On arriving at Julian Rocks the skipper navigated the craft around to the Northern side of the rocks where our dive would be protected from the prevailing ocean swells. The scuba divers were briefed by their dive leader and, one-by-one, took to the water. My snorkelling companions and I were briefed by boat captain, Chris, who assured us that we had picked a perfect day for a snorkel and then advised us of the different places we might wish to swim (to optimise the amount of sea life we would experience), the procedures we should follow if we needed any assistance and information about where he would be picking us up at the end of our dive. He told us that he would be carefully watching us all the time and that if we experienced any difficulty we should signal to him immediately to come and get us.

Then we were overboard! Seeing the ocean floor ten meters below is quite a shock. As the bubbles from entering the water cleared from around my goggles I was immediately aware of being surrounded by dozens of colourful fish of all shapes and sizes flying here and there in their shadowy blue liquid. I followed Chris’s instruction to swim in towards the rocks where the water is a little shallower and where the wild life clusters around the reefs and inlets that are part of the Julian Rocks structure. 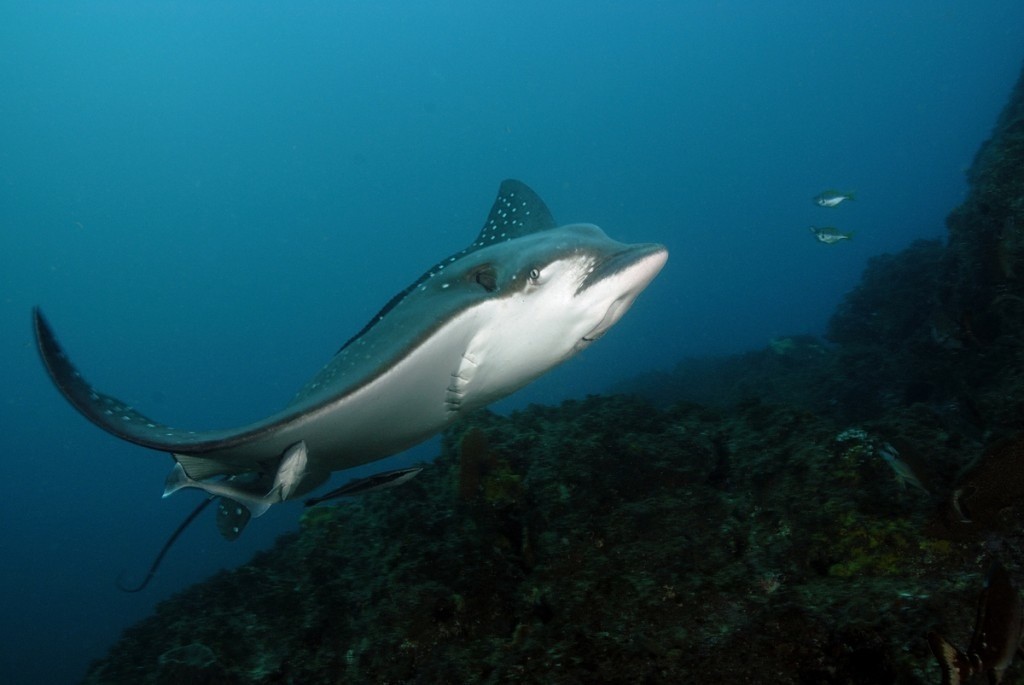 An Eagle Ray glides by at Julian Rocks

Despite my pre-trip thinking that a snorkelling trip to Julian Rocks would hold no fears now that I was actually in the water and exploring a new and unfamiliar world I was not as calm as I expected to be. My snorkelling companions, being a couple, were more than happy to drift off by themselves. All of the divers had disappeared into the deep water long ago. The boat captain was sitting in the sun on the dive boat moored some fifty meters away. Call me chicken. But being by myself, I was nervous.

Nervous or not though, I wouldn’t have missed the experience for quids. Blue groper with their puffy electric blue lips nibbled away at the rock walls. Coral of many colours, shapes and sizes grew out from rocky underwater walls. Yellow fish, grey fish, multi-coloured fish… some darting about… some feeding on the bottom… some seemingly just having a leisurely swim… and some purposefully intent on some unknown fishy business were everywhere. Puffer fish the size of basketballs slobbed around confidently in almost every underwater canyon I discovered.

As I swam between two reefs I saw the shape of two beautiful leopard sharks with their heads disappearing into an underwater cave. Excited by the discovery I decided to go looking for my snorkelling companions. I found them near an inlet thirty meters or so further down the rock wall. Before I got the opportunity to show them my leopard sharks they wanted me to check out their discovery. Resting on the sandy bottom in around three meters of water was a huge sandy and dusky coloured Wobbegong shark. My initial thought was to dive down and touch the creature on the back. My second thought was that that would not only be a crass thing to do but it would also be unwise. While Wobbegong are not a dangerous creature of the deep they are certainly willing to give a foolish interfering human a nasty nip if the human is ill-mannered. So I left the beautiful carpet-patterned animal to its sandy-bottom slumbering and escorted my companions to the leopard shark canyon. 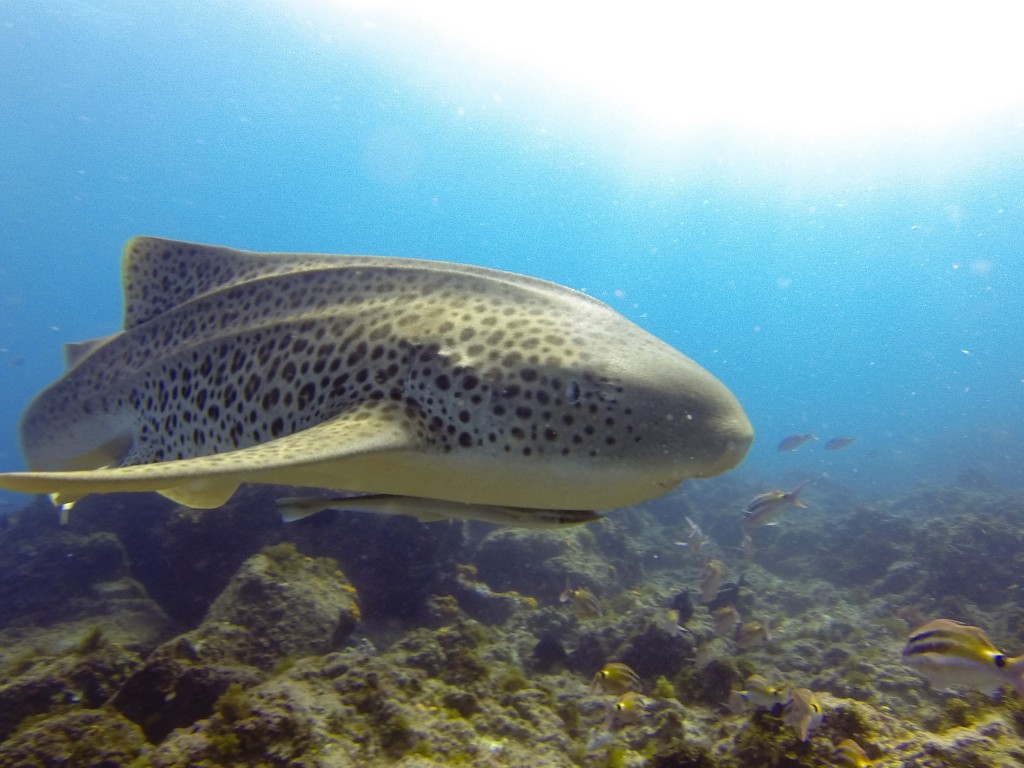 A Leopard Shark cruises by at Julian Rocks

I saw two large yellow-tailed, torpedo-shaped, King Fish (each around half a meter in length) swimming briskly in pursuit of a small school of fish. As I followed the predators over a reef into yet another deep, sandy, canyon the sight of the day loomed out of the darkness. A dark brown creature with a hawk-like face and with pink-white spots on its meter-wide dark wings soared out of the distant blue gloom and headed in my direction. When it saw an unwelcome human stranger in its path it elegantly banked to the right revealing the bright white underside of its wings and headed down the canyon and back out into the deeper water trailing an enormous long, thin and sharp tail behind it. Chris later explained to me that I had seen an Eagle Ray.

Everyone on board was thrilled by their sixty minutes in the water, and on the return journey rather than heading straight back for The Pass Chris took a bee-line for the Eastern Cape then slowly skirted Little Wategos and Wategos Beaches so that we could watch the local dolphins at play and the surfers catching waves from the less familiar ocean side view. In the bright sunshine and warm air Byron Bay observed from the sparkling clear ocean could not have looked more beautiful as we returned to our launching place. 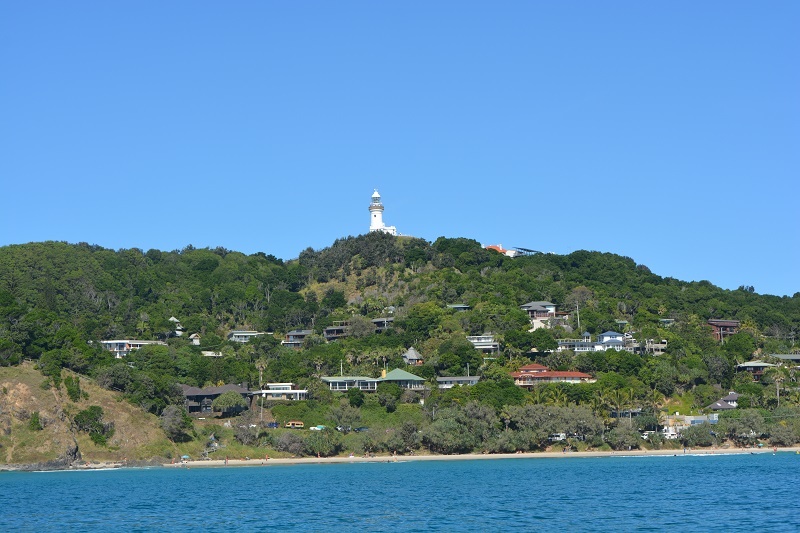 Looking back on it, it’s simply remarkable to me that I could have lived so close to such an extraordinary place for so many years without ever having felt the need to go there. I must have been nuts. Julian Rocks is a must visit place for locals and visitors alike. I’ll certainly be going back.

Tim Edwards was a guest of Sun Dive, Byron Bay for this story.