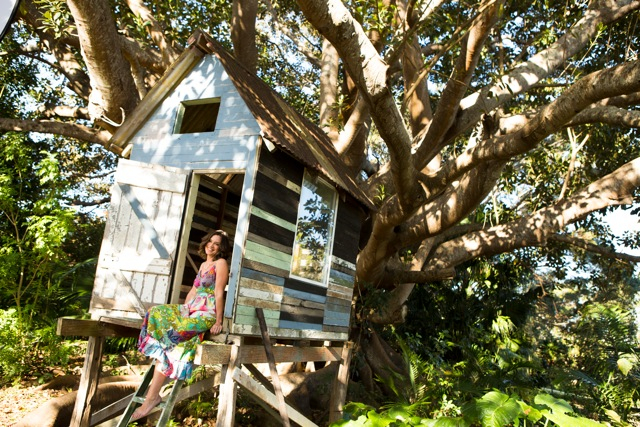 Singer songwriter Kim Banffy – her voice has been compared to Joni Mitchell meeting Kim Carpenter on a spring day.

Sometimes, it seems, we need an extreme moment to propel us into our destiny. When singer Kim Banffy almost died in a car accident she came out of recovery with a life-changing decision to attend a Summersong music camp in Lennox Head, and she hasn’t looked back since, writes Angela Rowland.

It’s hard to believe, even as I’m listening to the story, that singer songwriter Kim Banffy, had ever imagined a life without music. The diminutive Banffy lives in a neat cottage at the sea’s edge in South Golden Beach, surrounded by art and musical instruments. We’re talking at the Poinciana Cafe in Mullumbimby about her life and work, and Banffy is remembering the dark days of her life post an almost fatal car accident.

“I was in a car accident in 2000,” Banffy says.  “I narrowly missed being propelled into oncoming traffic after aquaplaning on a notoriously dangerous part of the Great Western Highway, when I got hit from behind by a bus, and bounced off the guard rail several times.  Someone else died in exactly the same place in the same way only two weeks later, so I felt lucky to be alive. On top of that my father in law had died earlier in the year, my husband wasn’t coping with it, I had been lying on my back for three months, and these events actually forced me to take care of myself for a while, as life will do, eventually. I’d heard about the annual Summersong singing camp at Lennox Head, and I thought to myself, I’m going to go to that singing camp. That’ll make me feel better. It started on a Saturday and by Thursday I was crying all day. I had finally got back to doing something that I really love doing, and suddenly I discovered all these bottled emotions that I was able to finally let out.”

An extra impetus to Banffy’s desire to discover her destiny lay in a phone call she received a few years later from her mother, not long before she died.

“When my mother was 75 she rang me up in tears and said to me ‘I feel I’ve wasted my life. I’ve got all these talents and I didn’t use them,’ so I thought, ‘I’m not going to let that happen to me’,” Says Banffy. “After that I started joining a few community choirs, and anyone who has seen the film, As It Is In Heaven, will know the benefit of community choirs, but it took me from 2000 until 2005 to actually start writing my own songs and then another nine years to record an album.” 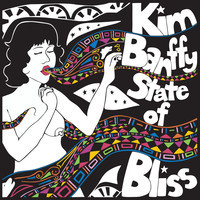 Kim Banffy’s State of Bliss, with art work by Banffy.

Banffy, who grew up in Sydney, had, as many teachers do, a background in nurturing other people’s creativity.  With a Master of Education degree in Creative Arts and as a lecturer in visual arts, music and English, Banffy’s creative credentials were without question, but making the leap from teaching to doing was still not easy.  But when she finally stepped onto the north coast music scene, it was with the glowing drive of a woman who does not want to wait a second longer. Since recording her debut album State of Bliss in Byron Bay’s Studio 301, (with her own artwork on the cover) finalised earlier in the year, she has been on a non-stop east coast performance ride, and still continues her art practice, writing books, and organising fundraisers.

After her marriage failed, Banffy moved to South Golden Beach last year. “I kept getting this intuition that I would be coming to Byron Bay to record at Studios 301, but that was so scary… all the famous people recorded there,” she says. “But I had this CD from the Lucky Wonders and as soon as I saw in the in-slip the name of producer- engineer Anthony Lycenko I just knew he would be recording my album for me. It took me a year to summon up the courage to approach him about it. Had I known he’d been nominated for an ARIA for his work on Pete Murray’s 2008 album, I would have been too intimidated to approach him, so it was lucky I didn’t know!”

Banffy has an attractive honesty, and even with all her recent success reveals that sometimes she still feels she’s not good enough to be a professional musician. “At my CD launch in June I was thinking, ‘I’m on stage with these real professionals’ and I just felt like a fraud,” she says. “There came that, ‘You’re not good enough’ voice again. Only after many years of peeling off onion layers could I come to a point where I was finally able to write and perform my own songs, which I feel have been given to me as a gift to share,’ she says.

State of Bliss is full of themes of love and longing, it’s melodic, and sometimes melancholic, reminiscent of the 1960’s and 70’s singer-songwriter days. A poppy album, with a twist of jazz and classical, it offers a musicality helped along by the creative expertise of Thierry Fossemalle and Dave Sanders, from The Whitlams and Grace Knight, Paul Appelkamp (aka Lionheir), local legend Steve Russell, and Anthony Lycenko. 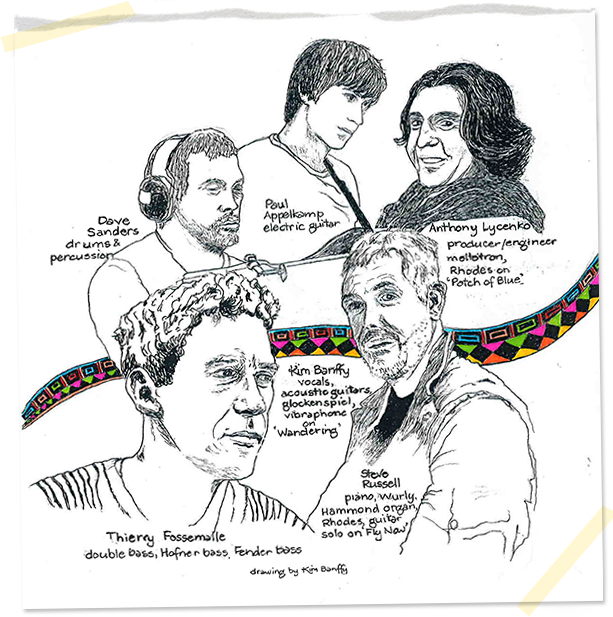 Kim Banffy’s sketch of her musicians and producer for State of Bliss.

With seven entries in the Dolphin Awards, to be announced in December, Kim is keen to keep making musical splashes locally and to give something back to the community at the same time. She recently curated Songs for Fred, a benefit for the Fred Hollows Foundation, showcasing exceptional local singer-songwriting talent on a diversity of instruments from piano, guitar to accordion.

Banffy is a living testimony for anyone wanting to step up and live their dreams – she reminds me that it is “often the things we are most afraid of that are the very things we need to do. When you think about it, why are we so afraid? Our fears only hold us back.”

Kim can be next seen performing at the Nimbin Hotel on 19th October at 4pm, with Al Brooker (ex Paul Kelly) on the double bass. State of Bliss is available to buy from her website, kimbanffy

Belinda Jeffery’s February favourite is a Thai prawn salad with a fragrant lime dressing, topped with crunchy ginger shreds and perfect for the final…