Touching his toes has never been Tim Edwards forte, so when he met international yoga guru and ecological activist Eoin Finn, he decided to hide at the back of the class. It didn’t work.

One of the aspects of sport that gets very little attention either in the popular media or, for that matter, in animated sporty discussions around the local bar is spirituality. Few punters give any regard at all to whether the Cowboys have maintained a commitment to daily prayerfulness, whether Gary Ablett is on a path to ascending to a higher plane or whether the Matildas consider their primary role one of witnessing for world love and peace.

Given that spirituality and an individual’s place in the cosmos is critical to every human being on the planet then clearly spirituality has deep relevance to sport and to athletes whether this is commonly recognized or not. Accordingly, I was thrilled to receive an invitation to the Byron Bay stop on the East Coast of Australia Eco Karma tour.

On the Eco Karma tour, international yoga guru, Eoin Finn, in partnership with Lululemon (technical athletic apparel) and the community ecological activist group ‘Fight for the reef’ ran a series of events along the east coast of Australia to promote the significance of the natural world for the spiritual and physical sustenance of every human being on the planet and to inspire participants to actively support nature in their lives in both a practical and political sense.

The Byron Bay event was to involve a brief presentation from Eoin and other Eco Karma representatives followed by a free hour-long yoga class topped off with a stylish party lavishly catered with drinks and food. Next day Eoin was also going to host an early morning surf session where the Bay’s beautiful waves could be enjoyed along with more pro ecological discussion.

How could I refuse such an invitation? Political, philosophical and spiritual discussion. A bit of exercise. Yummy food. Free drinks. Attractive, healthy and fit people. What a combo. I was in. Only problem was that I’ve never done yoga in my life! Grecco-roman wrestling? Yes. Boxing? Yes. Rugby? Yes. Basketball? Yes. Surfing? Yes. Weight training? Yes. Even aerobics classes. Yes. But never in my entire life, yoga.

In the days when I used to pull on rugby boots I was taught that front row forwards shouldn’t be too flexible. It wasn’t good for scrummaging, supposedly. That was a long time ago. Stretching was almost unheard of when I was a sporty youngster. As a result, I am a quite fit, quite strong, quite healthy old bugger who has trouble touching his knees let alone his toes. The only solution was to go to the very back when the yoga class started and hope like hell that Eoin didn’t notice me hiding in the shadows.

I arrived on time at the event meeting place and tried to not look too out of place in my ratty boardies and old t-shirt among a mixed-age, stylishly attired (in modern athletic/yoga

apparel) and extraordinarily healthy looking crowd of around one hundred people.

The early part of the meeting went well. Eoin and his fellow presenters explained how nature provides the deepest spiritual sustenance available to us as human beings. He explained that as a yogi and as a surfer for him the ocean itself is “a temple, a playground, a gym and a supermarket” and therefore plays a huge role in his life. He also explained that much of the air that we breath comes from the ocean (from plankton) and that our sweat, blood and tears all, at some stage, have been processed through the ocean. His message was that yoga participants and surfers have a responsibility to actively support initiatives committed to the sustenance of nature, the ocean and coral reefs where around twenty-five percent of the world’s marine life hang out.

After the presentations it was time to get down to some serious yoga practice. That was my queue to find a quiet spot out of Eoin’s sight where I could draw as little attention to myself as possible. I’ll admit, much of the class was a challenge. There was much that I could simply not do in the same way as the experienced practitioners present could. Even so, I felt that my (less than competent) attempts at all of the poses were doing myself some substantial good despite my lack of skill. Throughout the class I was aware that my body and mind were being challenged in a range of ways. Many of the poses had a significant strength element. Others focused on suppleness. Many worked on balance. Some even oddly felt aerobic. Over and above the physical work out I was aware that my mind and breath were experiencing a deepening and calming that is not often apparent during sport or exercise. Despite my own limitations I found the experience deeply satisfying and it certainly reinforced Eoin’s claim that yoga goes deeper than being simply a physical activity into being a somewhat spiritual or at least meditative pastime.

Did my efforts escape Eoin’s attention? No! He wandered around the room as he gave instructions to his pupils and it didn’t take him long to find the uncoordinated clutz trying to hide in the back of the class. As I became aware of his presence nearby I let go a little prayer to the yoga gods to spare me the humiliation of the guru coming up to me and correcting my poor efforts. My prayers were in vain. Eoin zeroed in on me on a number of occasions and through a combination of explanation and gently using his hands he was able to show me how to get the best out of the pose I was attempting. Wow. I thought I would be embarrassed. I wasn’t. With Eoin’s help I was really learning. This old athlete with the bigger-than-usual personal space requirements didn’t even have a problem with being man-handled by the yoga guru.

Eoin’s warm spirit and desire to assist others even spread to people around me in the class. One gentle woman even suspended her practice of Eoin’s more complex poses so she could demonstrate to me easier variations better suited to my level of skill and fitness. Another gentle soul consciously chose to pair up with me, despite my level of incompetence, when time came to practice poses that require two participants. I know I am cute but I doubt if it was my good looks that encouraged her to team up with me. It was much more likely a sense of community spirit and helpfulness brought on by the class itself and the sense of altruism that comes from years of practicing yoga philosophy, I suspect.

After the class the Lululemon representatives and Eoin asked us all to stick around, enjoy each other’s company and enjoy the food and drinks available and they didn’t short-change us with the refreshments. The food was delicious and the drinks refreshing. 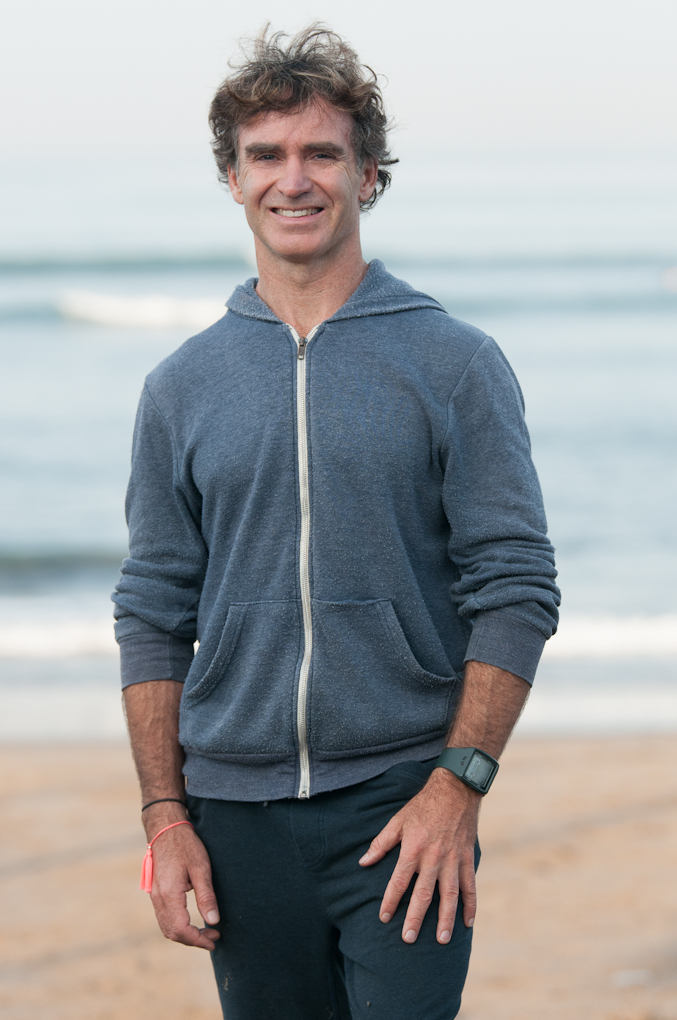 After a quick chat with a few fellow participant and a thank you to my Lululemon hosts and Eoin Finn I said goodbye. It’s sometimes easy to be cynical about Byron Bay and its abundance of alternative ways of seeing the world but the Eco Karma party squeezed every ounce of cynicism out of this old body. The arguments put by the presenters about the importance of a spiritual approach to yoga and the preservation of nature struck a chord with me and may even become transformational. I am certainly going to put my brain towards developing practical ways in which I can help sustain the ocean… and I am certainly coming back for more yoga!

Oh…and I’m even happy to put in a quick plug for Lululemon. I used to hate modern athletic/yoga gear… especially when teamed with expensive big brand trainers and worn by ‘Beautiful People’ at my favourite local café. I hated athletic gear almost as much as I hate Porsche SUV vehicles. The Lululemon people, clearly feeling sorry for me because of my daggy old boardies and torn t-shirt, donated me a pair of their athletic shorts and shirt. What a revelation. The shirt is cool enough but the shorts are one of the finest garments I’ve ever had. Comfortable. Breezy. Look good. Great pockets with zippers. Loose-fitting. Quick dry. Stretchy. I’ll never wear boardies to play sport again.

I can’t actually believe I’m writing this sentence, but I’m not only a yoga convert but an athletic-wear convert as well.

You can read more by Tim Edwards on sportsocratic.com

And if you’re wanting running gear or great gear for sweaty workouts go to: lululemon.com.au