Owning animals is a dream for most children, looking after them is a different thing!  Now the Macadamia Castle at Knockrow has started a series of holiday workshops for children and teenagers to help educate them about animal care.

Many years ago, on our first family holiday in Byron, we were driving from Ballina airport in our hire-car, when I spotted what looked like a medieval castle up ahead, with a giant knight, fully equipped in armour standing out the front.

“What on earth is that?” I said, and our then-eight-year-old son of course immediately wanted to stop, then and there.

Little did I know at that point that the Macadamia Castle would, in the future, become a place of almost weekly visits, when a family pass was essential. Little did I also know that I would become adept at mini-golf, and even less did I know that 15 years later, with my children fully-grown, I would be there as an honorary (if ancient) participant in two holiday workshops, Wildlife Guardians (for seven to eleven year-olds) and Keeper for a Day (for twelve to eighteen year-olds).

I couldn’t have possibly guessed how much fun it would be tagging along with the workshops, or how much I would learn. As a long-time guinea-pig owner when I was a child in England for instance, I never knew that that little guinea-pigs like orange, or that in fact they have very high vitamin C needs, and so, particularly if they don’t have much access to natural grasses and clover, oranges are an essential part of their diet.

The participants in Wildlife Guardians create enrichment enclosures for their guineapigs under the watchful eye of Keeper Georgia Shapter.

Also (and I can already hear the cries of disbelief, but it’s true), I never knew – or more correctly had never stopped to think about the fact – that kangaroos and emus can’t walk backwards, and this is why they’re on our Coat of Arms, because Australia must go forward, which of course suddenly makes much more sense of Advance Australia Fair, the anthem to which none of us can ever remember the words. (Well, at least I can’t.)

I’m in the company of senior keeper Georgia Shapter, who is in charge of the young Wildlife Guardians holiday workshop, and the next day’s Keeper for a Day. Georgia, who has worked at the Castle for 15 years, knows all the animals by heart. (And for those of you who may have wondered if Elvis the blind goat had passed away – he’s living his life out on a property and is still very much alive.) 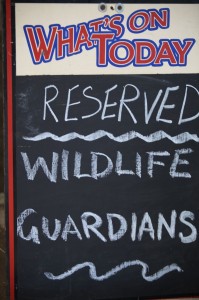 The young Wildlife Guardians had a ball creating ‘enrichment’ enclosures for their guinea pigs, with cardboard tubes, fresh sawdust and food, and lots of behavioural comparisons. The wombat’s life was also very much enriched by the hiding of parcels of fresh corn in her enclosure, and by the time she’d finally worked out where they all were, it was time for some alpaca behavioural training, because, said Georgia, he’d developed a dislike of the keepers in their uniforms, although he was very friendly towards the visitors.

“It’s because we have to put tick collars on him,” she told me, “and also we have to shear him, which he isn’t very keen on.” The behavioural training was designed to reintroduce him to the idea that the keepers could be nice too! “We just want him to realise that we come with treats,” she said, a touch sadly.

The next day the young keepers-in-training learned some of the harder facts of life – that, for instance, 80% of a keeper’s job, is clearing up animal poo. The kind of fact that is going to quickly weed out the animal lovers from those who really want a career in animal care. Being older, they were able to help with food preparation and to have a greater interaction with the animals.

“We’ve been thrilled with the fact that quite a few kids who’ve done Keeper for a Day have then made a choice to go on and work in the industry,” said Georgia.

Without a doubt, the whole group said, their favourite place was the aviary, where they were able to go to town with their interior decorating skills, placing grevillea and bottle brush blossoms so that the parrots could indulge their sweet tooth. 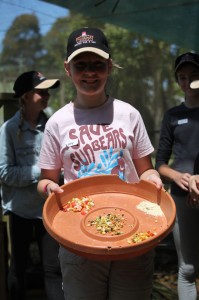 Food time for the birds at the Macadamia Castle aviary.

What they’d learnt, which had surprised them, was how carefully sterilized all the bottles and feeding equipment for the baby animals had to be. “We have to take every precaution with the babies,” Georgia explained. “Particularly because many of them have been orphaned and they don’t have the same immunity they would have if they were in the wild with their mothers.”

Of course, while the workshops were going on, the everyday business of the Castle was underway as well – and being the holidays it was in full swing, but these workshops are part of a new initiative towards education that the Macadamia Castle management are exploring. 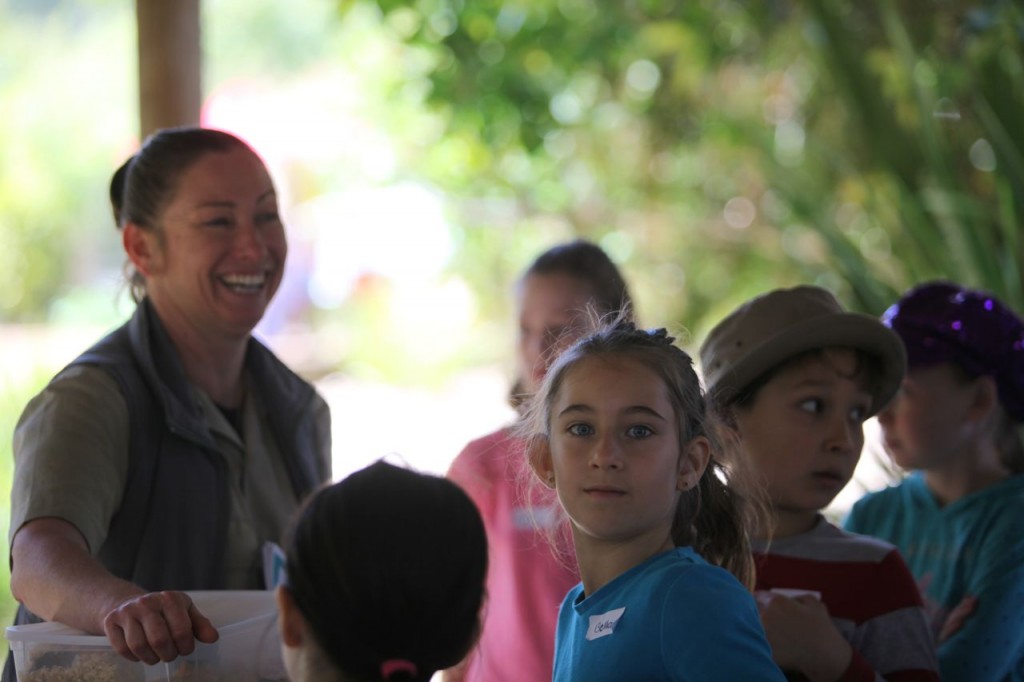 Keeper Georgia Shapter with her group of young Wildlife Guardians.

“We’re surveying customers to find out what they want to see,” said Georgia, “and whether perhaps we move more towards being a native animal park so that we can better educate Australians – and visitors to Australia about the amazing wildlife we have right here on our doorstep.”

The Macadamia Castle, along with the kangaroo and the emu, is marching forward, although I’m sure the massive knight-at-arms who still colourfully guards the entrance, isn’t going anywhere in a hurry.

Photographs and text by Candida Baker

The Macadamia Castle is open seven days a week, 8.00 am to 5.00 pm. Workshops take place during the holidays and there are limited numbers of places.

What does it mean when the Big Four go it alone and raise their mortgage rates?  When it’s coming off a low base, it’s…