Artist and designer Pete Goodlet and his partner Dave Gale had been suffering some trials and tribulations, so they decided to pack up their troubles in their old kit bag, and head off on a holiday with Sharon the Caravan.

Sharon’s our big old retro Chesney Caravan who has also been known to go by ‘Shazza’. She was a gift from our good friends Big Tone and the Pineapple Princess.

I should explain that even though Dave was originally excited by my good news that we’d received such a lavish gift he was less than enamored when he actually got his first glimpse of Sharon. (In her prime, she’d once been a haven of solitude and inspiration to many a famous muso, and although she’s never been one to brag she’s even sheltered the famous Kelly gang – well Paul and Dan anyway.) Dave had visions of a glamorous curvy vintage caravan but Shazza was not exactly a picture of beauty! In fact, when we first saw her she was covered in slime and moss and with a tree growing directly out of her roof. To be honest big fat square Sharon gave off an air of quiet desperation. 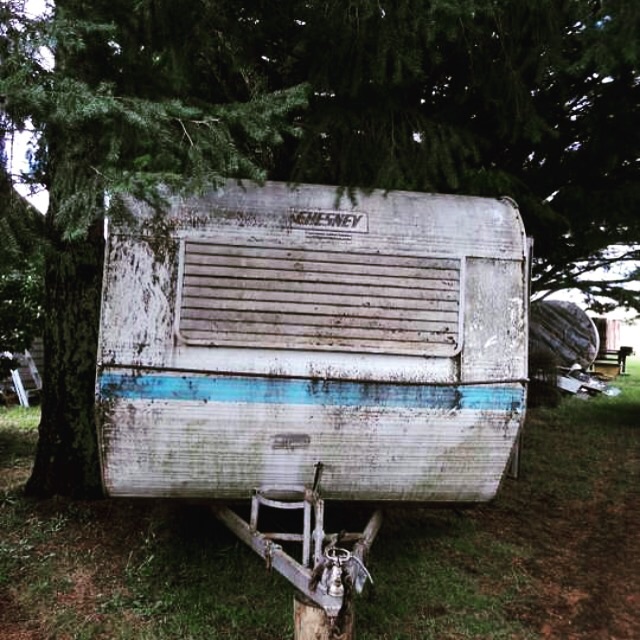 Sharon gave off an air of quiet desperation…

Before we could even start with the renovations I had to perform a touch of amateur arboreal gymnastics – which entailed a lot of laughter from a helpfully watching crew. But then our Sharon was on the road to restoration and Dave’s initial hesitation turned to a passionate love affair as he scrubbed, scraped and painted every surface that Sharon had to offer.

No sooner were we done with Sharon’s makeover and it was time for our big move north to Murwillumbah to follow our sub-tropical dream. Sharon, wondering what she had done to offend, was left behind, until Dave went back to retrieve our home on wheels. I had to be left out of the 4000 kilometre return journey, so I planned to fly to Newcastle and join them on the return journey. Unfortunately a bush fire caused a major diversion for Dave, our dog Thelma Louise and Sharon and it was arranged that I would meet up with them in Yamba. I had to travel a good 120 kilometres alone! Due to their diversion it transpired that they rejoined the highway in front of me, traveling north – and then of course I spotted them! I must admit I was a little taken aback when Dave only scowled at me as I sailed gaily by, waving and tooting! Boy 4000 kilometres can really put a dent in someone’s sense of humour! 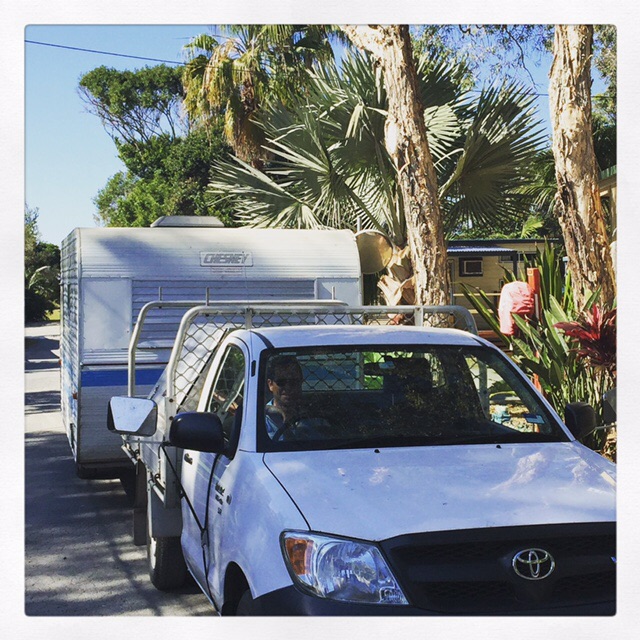 The newly-renovated Sharon making her way home to Murwillumbah.

So there we are. Sharon is now officially a resident of Northern NSW and has even enjoyed a trip to Nimbin, and as I’m writing this we are traveling home from a truly delightful stay in Sapphire Beach just north of Coffs Harbour. Under the shade of the mighty paperbarks and only metres from a sapphire blue ocean we laughed, drank, read and ate to our hearts content.

The ocean was brisk but delightful and Thelma Louise and I frolicked like teenagers…albeit a creaky one, while Dave declined the offer to immerse himself in freezing cold water. Dining out was superb, as was checking out the delights of Bellingen and all its splendid craft.

We returned restored and inspired. And the moral of the story is – there is no moral…who needs them? All I can say is If you find life is getting you down, look for the simple pleasures and enjoy! 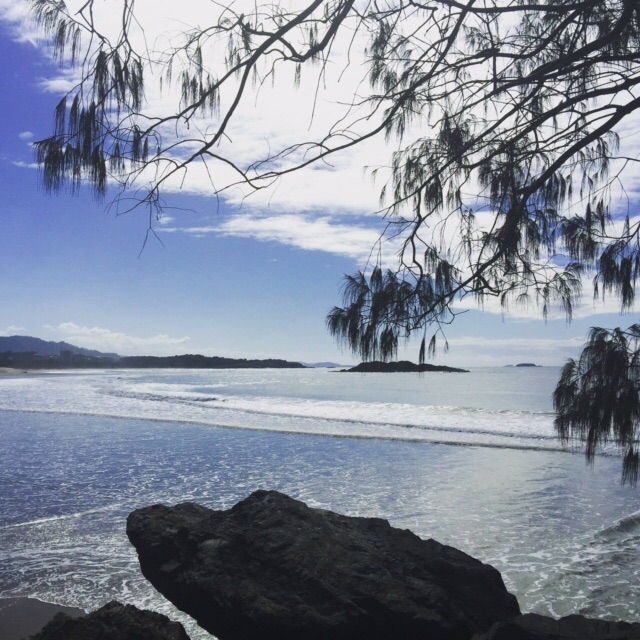 You can read more about Pete’s adventures and also see his art on: petegoodlet.com

“I took this photograph at the Bentley Blockade last April, a little over a year ago,” says Verandah Magazine publisher Candida Baker.  “Not long…