It’s easy, when you look at a lovely glossy little book jam-packed full of photographs, not to see the hard work that may have gone into collecting the images, particularly when the photographer – in this case, Lismore-based Peter Derrett, has forgotten W. C. Fields’ adage to never work with animals or children, and has spent the past few years photographing dogs, and just for good measure, elephants…

“It wasn’t on my list of things to do,” says Derrett, over a cup of coffee. “It was just one of those things that fell into place.” Derrett, who recently retired as a senior English and Drama teacher from Trinity Catholic College in Lismore, received an email from Melbourne-based author Suzanne McCourt (whose first novel, The Lost Child was published last year). She’d written a book – Old Dogs, lessons in loving & ageing, and she needed somebody to photograph the dogs for her. “She’d heard from a mutual friend that I do quite theatrical photos and so we talked about what she wanted – and that’s how the project came about.”

The Lismore dogs were well-behaved in comparison to the Melbourne ones, Derrett says. “I did ten up here in my home studio – and they were great, very easy to work with. In Melbourne I went down to shoot 40 or so dogs. I must say they were very punctual – they turned up at half-an-hour intervals on the dot, rain or hail, which isn’t our strength in the Northern Rivers! We’d made a studio in Suzanne’s spa room and one huge Old English Sheepdog with hair all over its eyes, bounded into the room leapt straight into the pool and sunk to the bottom. We did CPR on it, took it down to the beach for a run and it was fine.” 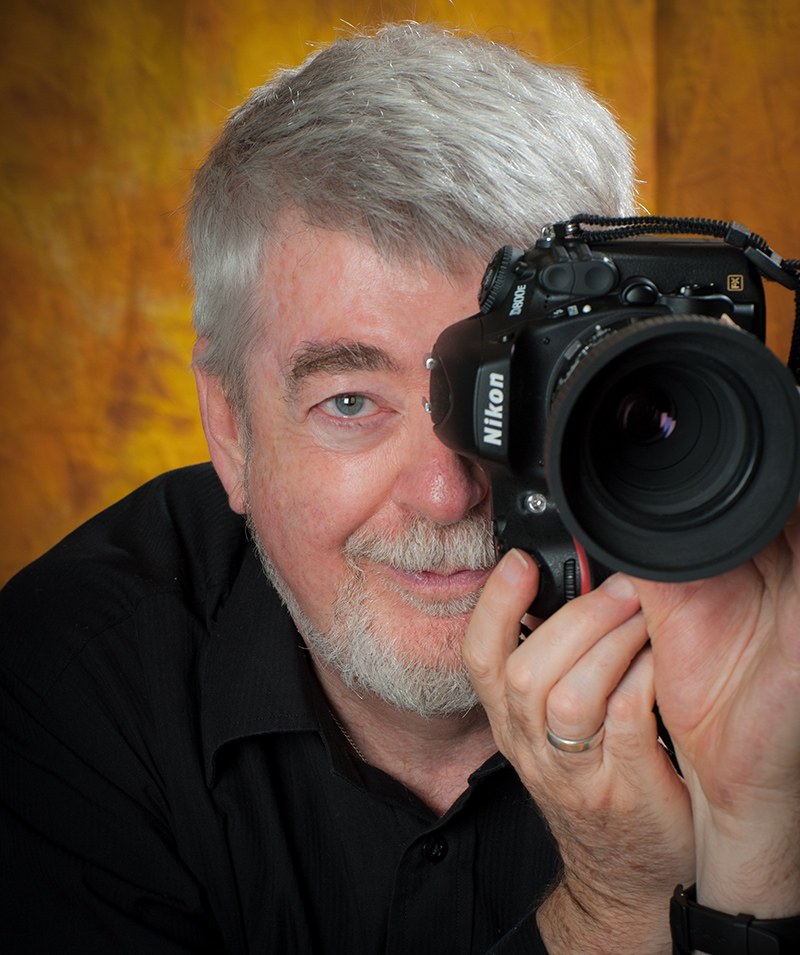 Photographer Peter Derrett turns the camera on himself…

Never one to miss an artistic opportunity Derrett turned the incident into a photograph in the book with the shaggy sheepdog shaking its hair while being blowdried.

The book, with its quotes about what old dogs can teach us, came about because of McCourt’s experience of her own dog’s ageing. It made her wonder how she would age, and it spurred her interest in the relationship between old dogs and their owners. It was a project that appealed to Derrett. “We’d had an old dog, Dante,” he says, “so we’d travelled that road, and I’d taken lots of photos of him. I loved meeting the owners of the dogs when we were doing the shoots, and listening to their stories.”

McCourt rustled up the dogs from everywhere. “She stopped people on the beach, she asked dog-rescue people, owners of vineyards, friends and friends of friends,” Derrett says, “and she ended up with this wonderful collection of mixed characters and breeds.”

There’s a wonderful photograph in the book (page 27) of an elderly Boxer looking longingly at a doughnut, which, I have to say as the owner of two small and very naughty dogs is very impressive. “That dog stared at the doughnut without moving for 30 minutes,” Derrett recalls. “Then the owner snapped his fingers, and bam, the doughnut was gone in one mouthful!” 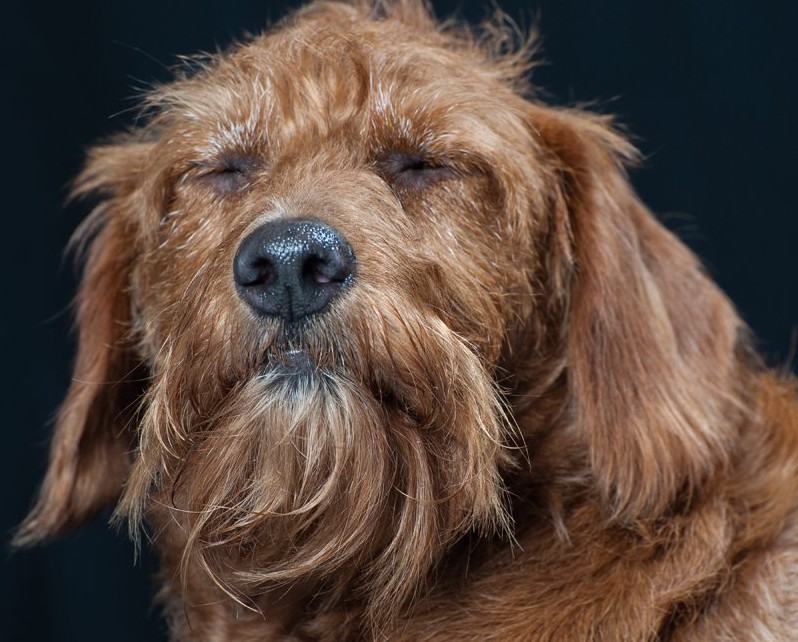 Did he think, I wonder, that some of the owners looked like their dogs, or vice versa? “Absolutely!” he says. “Not always, but a lot of the time there was a similarity at least between dogs and owners that was very endearing.”

The book, published through McCourt’s personal publishing label, Posh Dog Publications, was the first of four projects McCourt and Derrett have created together. The next one, Old Dogs, Mindfulness and Meditation, like the first, raises funds for the Black Dog Institute to help aid research into depression. It was a chance for Derrett to use some of his personal favourites from Thailand, where he and wife Ros are based for much of the year these days.

“The Thais have a lot of temple dogs,” he says, “and many of the temples are sanctuaries for dogs. The photographic opportunities are endless there, and the monks pay the dogs a lot of respect. I think it’s a beautiful little book – and certainly if there’s one thing dogs can teach us it’s how to live in the moment!” 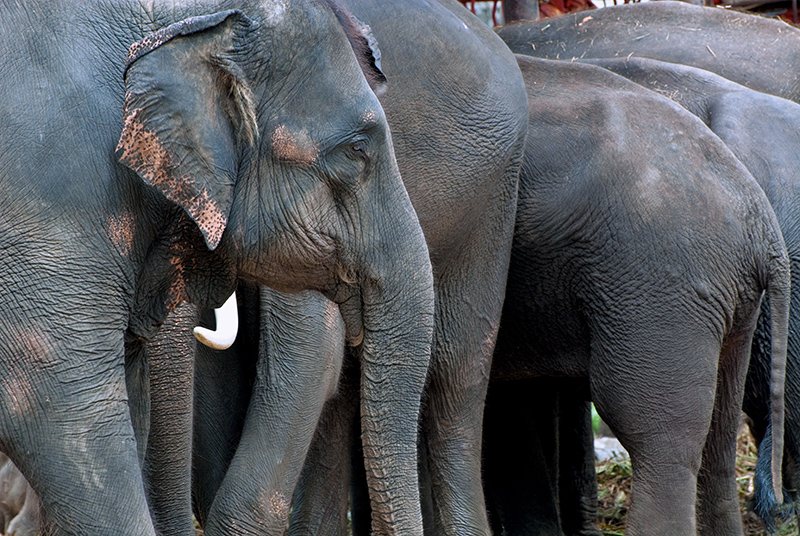 The inside cover of ‘For the Love of Elephants’ – another Derrett McCourt collaboration.

The Derretts first started going to Thailand regularly almost twenty years ago, and as Ros, an academic specializing in cultural tourism, began to get work lecturing at Naresuan University. A visit to an elephant sanctuary in Ayutthaya, 80ks north of Bangkok, led to an enduring friendship with the two Australian women Ewa and Michelle who run Elephantstay. Originally a graphic artist and zoologist respectively, the pair now run the biggest breeding program in the world for Asian elephants. “The sanctuary is owned by a Thai,” says Derrett, “but our friends run it. People can stay there for at least three days and are assigned an elephant. We’d been going there for years and it occurred to me that with Susan’s words and my photos we could make a great book.” The collaboration produced the beautiful little book – For the Love of Elephants which was also published last year.

Last but by no means least is the delightful Dogs in Venice which came about from the Derrett’s regular visits to the Venice Biennale. “We go every two years and stay for a month,” says Derrett, “so when Susan and I agreed that Venice would make a lovely book, I spent every day photographing dogs to demonstrate the city’s essence.   I had a little sign translated into Italian asking people if they wanted to participate and every single person answered me ‘yes’ in English!” 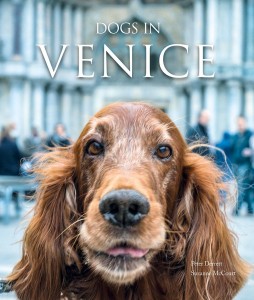 According to Derrett there are literally millions of dogs in the residential area of Venice, and basically dogs rule ok. “They’re everywhere,” he says. “Dogs sit on people’s laps at cafes and restaurants, or on the vaporettos (water taxis), or even on their scooters. They are literally everywhere, and part of people’s everyday lives in a way we don’t see in Australia.”

But whether they’re in Venice, Lismore, Melbourne or Thailand or hail from elsewhere, it would seem that at least for the dogs in these books, it’s a dog’s life.

All the books are available from poshdogpublishing

If you’re in the Northern Rivers this summer it’s easy to make the holidays a whirlwind of music, theatre and art, writes creative consultant…