What does the arty, discerning cinephile have in common with your average Aussie bloke? At the Byron Bay Film Festival, the answer is clear: absolutely everything. From online dating to speed-racing demons and exotic mountain-climbing the festival has something for both movie buffs and the he-men (and women) among us, writes Lonnie Gilroy.

There’s not much that’s blokier than motorbikes and one of the festival’s most exciting films has hyper-powered two-wheelers as its true stars. Out of Nothing, directed by Chad DeRosa, and co-produced by Andrew Lahmann and Ryan Stiles of Whose Line Is It Anyway? fame is a terrific feature-length documentary following an obsessed group of motorbike enthusiasts who travel each year to the fabled Bonneville Salt Flats in Utah to compete for land speed records.

Petrolheads will get a real thrill from the technical and mechanical aspects of the film, not to mention the exhilarating race cinematography. Complications inevitably arise during the speed trials – inclement weather, mechanical faults, even personal inner struggles – but the men involved display a reassuring certainty throughout. 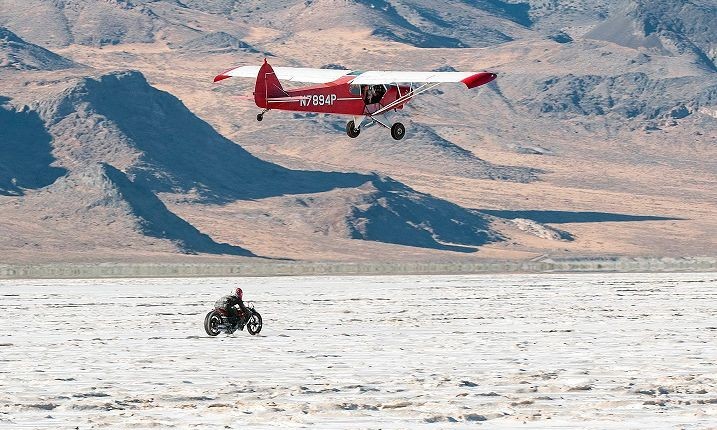 From Out of Nothing. Photograph: Phil Hawkins, 2012, Ishootfromthehip.com

On the whole it would have to be said that the Shire is not a place where tough guys carry much clout and the BBFF generally shies away from anything that smacks of macho or militarism. But Oden Roberts’ A Fighting Season is such an impressive film we had to screen it. The film, which is having its World Premiere at the festival, looks at the work of two Army Recruiters who face the daunting task of finding people to sign up while the 2007 ‘surge’ is going on in Iraq, but whose own jobs are in danger. One has been stationed in the recruiting office long enough to get comfortable and the other, injured in the field, just wants to get back to the frontline. They experience a whole new type of conflict: war isn’t confined to the battlefield.

A local tough guy movie features Ballina kickboxing champion, Brodie Stanton, who is as tough as they come and has been a world champion kick boxer since he was 15. In the very fine doco Brodie Stanton: A Film Portrait made by his 16-year-old schoolmate, Ballina’s Jayden Morrison, Brodie is a sweet, smiling youngster. Just don’t get him angry.

Another Australian film, Splendr, shows blokes doing that very blokey thing: chasing women. A remarkable student production from Swinburne University of Technology, Melbourne, Splendr tells the story of a young man who decides, on the urging of his best mate, to meet up with an older woman via an online dating app. Although prepared for a saucy rendezvous, both characters are confronted with something else entirely. It’s the sort of film that sneaks up on you, and is both effective and moving.

The perils of online dating and male confusion when the unexpected happens are also communicated hilariously in two other short Australian films: First Date and Early Checkout, starring Dustin Clare, and in the fun romp Ignition, a Griffith Film School graduate film, it’s 1970s Brisbane, the right time and place for men behaving badly. Long-haired Jake is awakened by the sound of rustling in his backyard. He rushes to the window to see someone’s stolen his beloved VW Kombi, Betsy. Ignition follows Jake, clad only in his undies, as he ventures into the night to rescue Betsy, with his unhelpful roommate Ben in tow.

Agua Blanca, shot in Mexico, is more of a slow-burner, with a deeply moving story of life lived to the fullest. The protagonists share a passion for the wild outdoors – the grandfather a love of climbing snow-topped mountains, the grandson is a white-water rafting enthusiast. Faced with the prospect of living his final days in a nursing home, Mauro instead sets out on one last trek. His grandson Sebastian accompanies him, and they embark on a journey that is as much philosophical as it is physical. The visuals are powerful and the direction measured. There isn’t a moment wasted in 29 minutes. 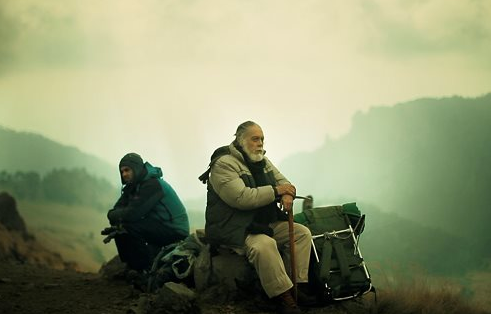 Agua Blanca, shot in Mexico, is a deeply moving story of life lived to the fullest.

More macho still are the expedition climbers in the breathtaking Jaeger Des Augenblicks, who like to make things difficult for themselves, choosing the most demanding of new routes to get to their destination – this time the top of the daunting mesa Mt. Roraima in South America. Awe-inspiring footage of the spectacular scenery helps us understand their motivation.

Last but by no means least, we all know that delusions of grandeur are great fuel for comedy, and there are none so deluded as the ageing cock-rockers who “star” in Brisbane writer/director Steve Pratt’s mockumentary Thunderlust and the Middle Beast.

Past their prime and struggling for a comeback hit, glam band Thunderlust travel to Jordan to make music videos for their new album. Abandoned by their regular video guy, they recruit local (and Thunderlust fan) Anas to direct the film clips. Anas soon learns the truth of the warning that you should never meet your idols. He’s got a tiny budget, tight timeframe, public controversies and squabbling band mates to manage.

It’s a classic band-story told with comic flair and confidence, perfect for fans of Spinal Tap and Led Zepplin alike. Along with writing Thunderlust’s music, Pratt also stars as guitar-shredding egomaniac Rocketeer, all at sea in Jordan’s traditional culture. It’s a hoot.

At Beate Sommer’s property, Aurora Valley, near Bangalow, humans and horses work – and play – in harmony to create healing.  An inter-species communication? …