When the flood levee broke, Melissa Gulbin slept through the early morning sirens.   When she woke, it was to a whole new water world.  She charts the inexorable progress of one of Lismore’s worst-ever floods.

I woke to the fragrance of big rain. In autumnal North Lismore, this means your pillows smell of mushrooms and loved ones like sourdough gingerbread.

My olfactory system had confirmed the Bureau of Meterology’s prediction: A cold front had indeed interacted with moisture from Tropical Cyclone Debbie.

By 7am a Terania Creek local informed his social media network of an unprecedented 557mm rain gauge reading. The CBD seemed nonplussed, however. It was coffees and smashed avo on toast as usual. It wasn’t until after lunch that the Bureau Meteorology sounded its warning – a major flood was expected overtop the levee at 11m.

After the June 2016 moderate flood that took out North Lismore, council reminded flood-prone Northies of their floor heights in a preparedness pack dated December 1. In the letter, those of us on the wrong side of the levee were informed we would be responsible for our own post-flood roadside waste collection services. I’d lost the file that would have told me my floor height was 11.38 metres. Instead, I cautiously estimated I was sitting at 10.8m, and threw toys, books and linen on beds. Good stuff went into the attic space. The rest of the afternoon was spent heaving white goods up stairs and aiding the elderly on my street.

For the flood-weary North Lismore community, a motley crew of single mums, boho seniors, greyhound trainers, artists and ratbags, floods are a relatively normal part of Lismore Life. We began mobilising well before the BOM warning. Vehicles were moved to higher ground and grog for infamous flood-party booze-ups were stocked.

One CBD bottle shop was clearly in a state of paralysis – still selling beer at 5pm as if  they hadn’t got the memo. Surely the stuff on my bed would be fine then, right?

The evacuation text pinged at 5.45pm but I’d already headed for my friend The Captain’s place which was on even lower ground – aptly named Lake Street. The prefect launch for a flood rescue tinny. By 10pm the water was in the yard and it was safe to put the bung in the boat. 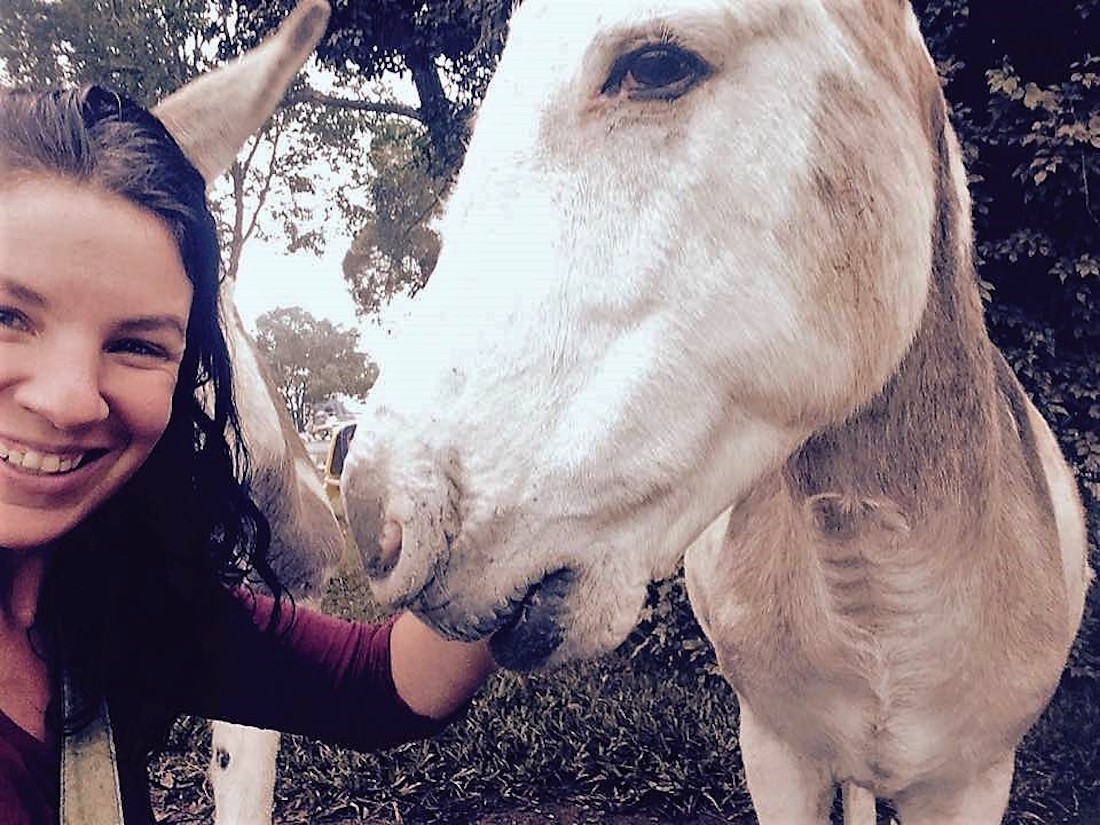 I slept right through the 4am levee overtopping sirens and woke to water close to the 12 metre floor.

Jill, the six-month-old Border Collie chased a snake into the flood water and vanished. The phone started beeping. There was already a list of neighbours to rescue and deliveries to make. With the dog presumed dead, we disentangled palm fronds from the boat motor. Then the puppy’s stupid black and white snout poked out from the canopy. She was pretty pleased with herself and her newfound waterworld. Myself, less so.

After delivering transistor radios, feeding stranded dogs and ferrying families to high ground, I worked up the courage to break into my own place and have a look around (timber doors were warped shut). The stuff on the girls’ beds was under water and my coveted reupholstered deco lounge suite was almost submerged.

Clearly, I decided in a moment of self-pity, I don’t deserve nice things.

We ferried four blind drunk youths with facial tattoos from an industrial roof to Hindmarsh Street. They didn’t thank us.

Cut off from the CBD, hilltop gawkers lapped at the flood’s edge with mobile phones. I had the good fortune of being able to recruit eight wonderful helpers to sluice out my house before the flood mud caked.

It was getting dark and my cavalry of cleaners needed to get home. The roads out were still underwater but the flood tinny’s route had becoming dangerously low. The mission was not helped by a disenfranchised bee colony which decided to rehome just above where the tinny was anchored.

A friend’s bees weren’t so flood prepared, however. I saw a photo of a lifeless box of bees on Facebook. For species with the capability to swarm and relocate with relative ease, the image was morbidly metaphorical.

Why didn’t they swarm? Why didn’t we? Did the Queen not get the BoM warning until it was too late, or had the swarm just become complacent?

Meanwhile, high-and-dry Goonellabah was in panic buying mode. Down in the bayou, cut off, with no power, and undercharged phones, we were giving freezer meat the sniff-test and eating whatever we could before it turned. 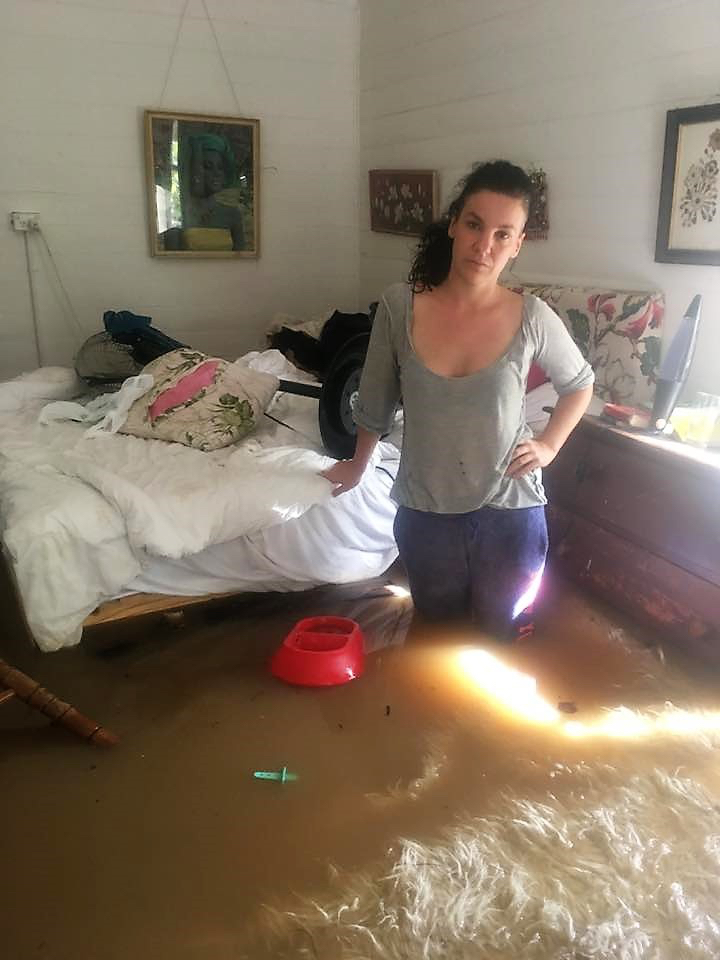 What used to be a bedroom…

The flood water subsided and people returned to homes and business to witness an zombie apocalypse garage sale from hell. I began triaging the streets of North Lismore with a Lismore Base Hospital Emergency Doctor. He was able to unemotionally assess where we were needed most, get them over their crucial heartbreaking hump, and move on to the next neighbourhood nightmare. This is where it really helps to know your neighbourhood. North Lismore knows where the elderly woman with cancer lives. We know where the woman with little bub lives. It’s the sort of triage that state-level emergency services just cannot do. achaten-suisse.com I also got to chuck a lot of soggy mattresses off high-set verandahs which made me feel very rock n roll.

The Rural Fire Service were deployed to hose down homes. The guys from Grafton value-added their service at mine by hosing down the clothes on my washing line and resuscitating my fireplace.

I got out the measuring tape. If my floor height was really 11.38 and the flood watermark was 70cm over that, then why were authorities stating the flood peaked at 11.6m? The numbers didn’t add up.

Later, I heard a cry from a Lake Street resident. It was 87-year-old Joy Love, born next door. She wanted to know if her husband had pulled through a touch-and-go operation but her phone line was down and she didn’t know how to use a mobile. Mrs Love explained doctors had ‘cut out a yard of poisoned intestines’ from Mr Love. I helped her make the call and she broke down in literal floods of tears. He had pulled through. Suddenly disparities over centimetres of plasterboard fell short of Mr Love’s guts measured in yards. 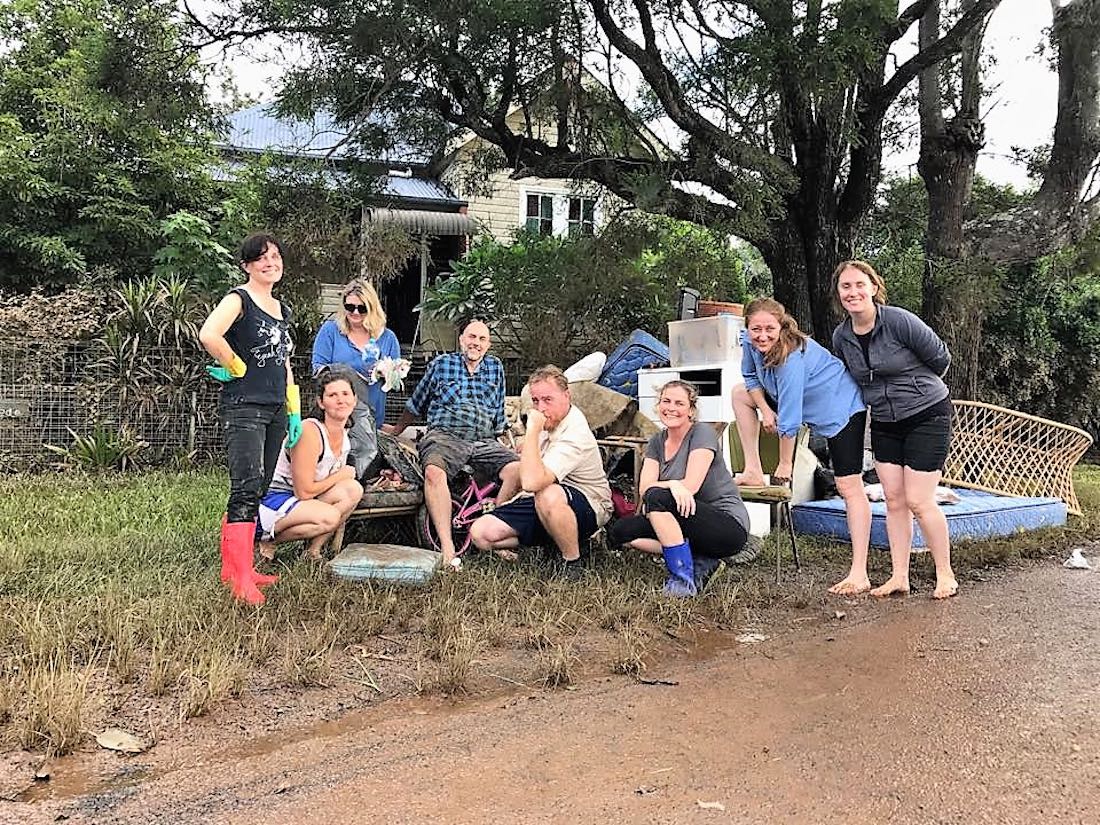 Melissa’s clean-up-crew. The Lismore community turned out in droves to help each other.

Perhaps Telstra had a deep-seated a fear of being trolled on Twitter by flood refugees with smartphones, but their disaster relief staff at the Buninngs car park seemed genuinely compassionate about sorting out my phone line. They didn’t mind at all that the kids stomped slop all over their atomic tangerine soft furnishings.

Despite all the generosity and the promise of Wi-Fi, my eight-year-old daughter could see I was starting to lose the plot. After her sister gave me attitude, she responded: “Give mum a break. She’s just gone through a natural disaster.”

With extreme weather events predicted to increase in severity and frequency in their lifetime, this empathy was encouraging. There is a very good chance my kids will live through much more than flood-soaked mattresses.

Precious resource: The kindness of strangers

An old bloke from the Grafton Fire Brigade popped in to see how I was going. I told him I had the house under control. He said, ‘Yeah, but how are you going?’ I immediately started howling into his high-vis coveralls. Sometimes it takes a stranger for you to be able to drop your bundle.

The way the community has come together after the flood has been overwhelming. Let’s just hope next time when the rain gauge keepers of Terania Creek give us record measurements, we’ll listen, stop selling beer, and swarm in preparedness. 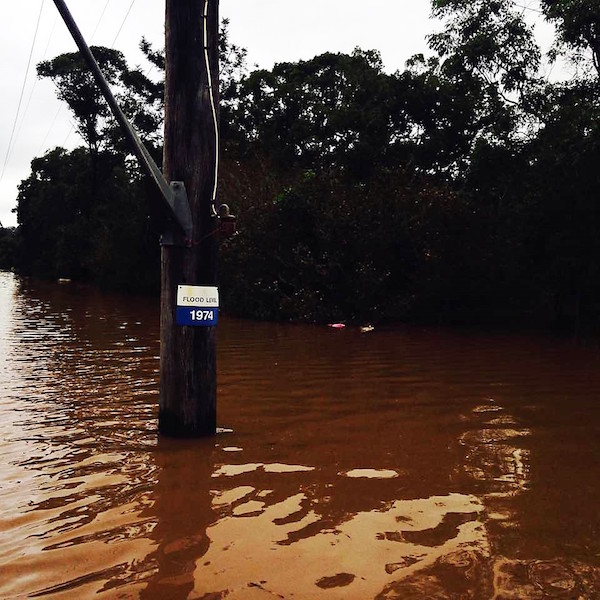 It’s an idea beautiful in its simplicity – a food stall within the local farmers’ markets, selling dishes prepared with produce directly from the…