Jenny Dowell has lived through a few floods, but the one left by Cyclone Debbie was something else.  Afterwards help came from everywhere and in every form – performer Jon English even donated a box of his socks.

I’d always said to friends in Melbourne that if Goonellabah flooded it was time to build an ark! Well, we had water throughout our living area when the drains failed to cope with the 400mm that fell in 24 hours. But that was trivial compared to the mess that Debbie left when she finally departed. The Wilsons River reached 11.6m – close to the 1974 big flood and the 10.6m levee was overtopped, as we always knew it would be when the inevitable big flood came. When the flood waters receded and all of us got down to work, cleaning, laundry and door knocking to check on people’s welfare, I heard my fair share of distressing stories but even when people had lost most of their possessions, there was a general response “I’m OK, there are people much worse off than me”.
Through the tears there were often smiles and hugs as people connected like never before. The Lismore Come to the Heart symbol has always been more than a marketing logo. Many of us have worn the little heart badge as a sign of pride that we live in Lismore but after this flood event, the Heart has become a symbol of rebuilding and connection to each other. When the Black Sombrero in the CBD hung a Heart flag on its door to indicate it was reopening, requests came for more, so sewing bees were arranged at the Black Sombrero for these flags to be produced for other businesses as they reopened. 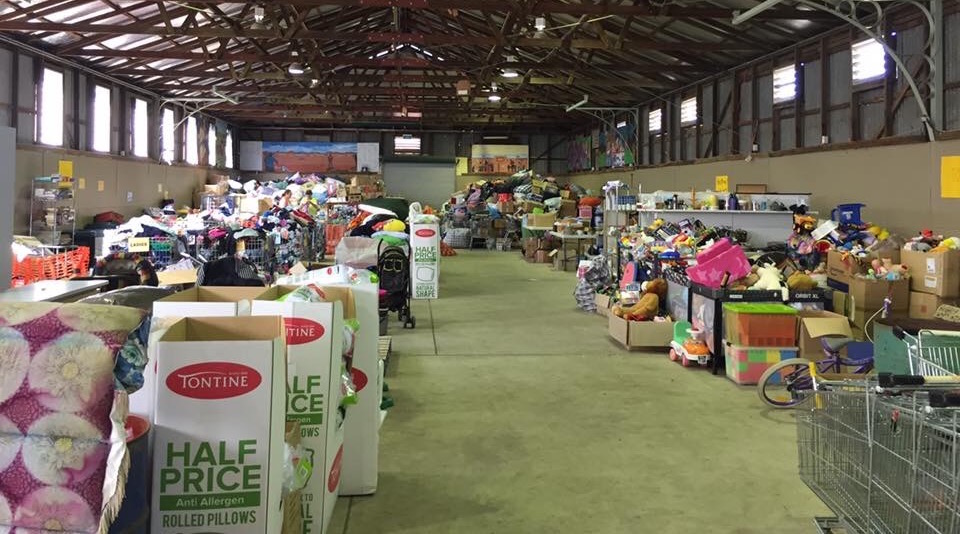 Lifeline NR set up in the Pavilion at Lismore Showgrounds to help people affected by the flood by distributing donated goods.

The heart badge became a sign of determination and resilience and council has noted a steady stream of residents buying the badges to wear and give to others to lift their spirits.
The stories of loss and grief will continue for many weeks and months and even longer for some but this community is strong and connected with someone always at hand to bear the load when things get too hard.
Thousands of people evacuated and while much of the contents of homes and businesses was secured and lifted, the height of the flood and the force of the water was greater than most people expected. As readers will have seen, the damage to homes and businesses in the CBD, North and South Lismore and parts of East Lismore was immense with thousands of tonnes of damaged goods piled up on footpaths as the recovery commenced.
The good thing – from every disaster, the strength of the community is demonstrated in the very difficult and long recovery stage after the emergency has passed.
An army of volunteers mobilised through Lismore Helping Hands Facebook page to attend thousands of homes and businesses. These volunteers helped clean premises and provide essential material aid and food to the people affected. Hundreds of RFS and SES volunteers from around the state provided much of the heavy lifting and high pressure hoses to help clean out buildings as people tried to salvage important items. 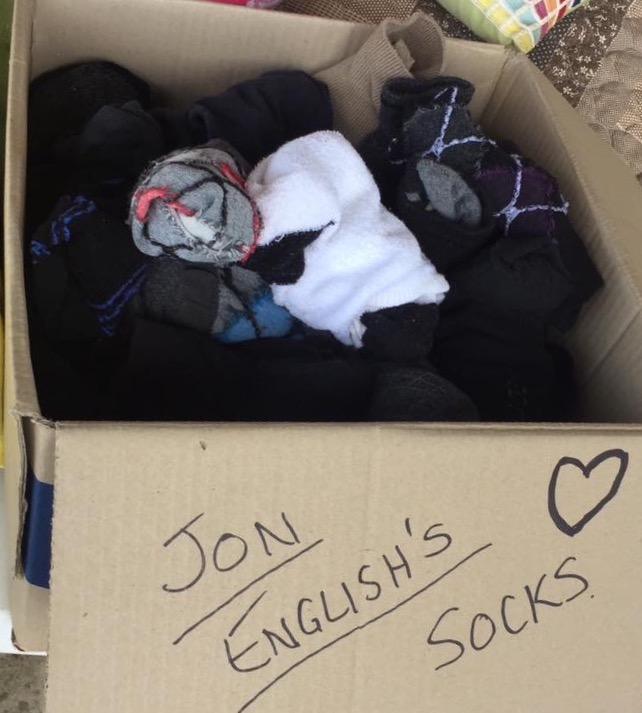 Jon English’s wife sent a box of his socks to the appeal!

As the emergency passed, the disused Lismore Railway station was a hub for the volunteers to form teams and for people to get food, bedding and clothing. Lifeline’s regional warehouse received tonnes of financed items and just as quickly was distributing goods to affected people. It wasn’t long before it became obvious that the warehouse was simply too small to cope with the supply or demand so a league Pavilion at the Showgrounds became the central collection and distribution centre not just for Lifeline but for many other charity groups.
The official NSW Government sponsored Flood Recovery Centre was also established in East Lismore to provide people with a one-stop-shop for advice on insurance, grants, fair trading, small business, primary industry assistance and more.
People who were unaffected by the disaster flocked to help and shopping in the supermarket in mud spattered clothing and rubber boots didn’t even cause a raised eyebrow, but the emotional toll of the flood was obvious despite the generally positive spirits. In the days after the water had gone, every heavy rain shower brought back feelings of dread.  The need for material aid for affected residents was also obvious and the community responded.
Lifeline Northern Rivers warehouse in South Lismore was soon overwhelmed by the sheer volume of donated clothing, furniture and household items so the opening of the Pavilion at the Showgrounds provided not only a much needed large space for donations and distribution but the opportunity for all charities to work together. 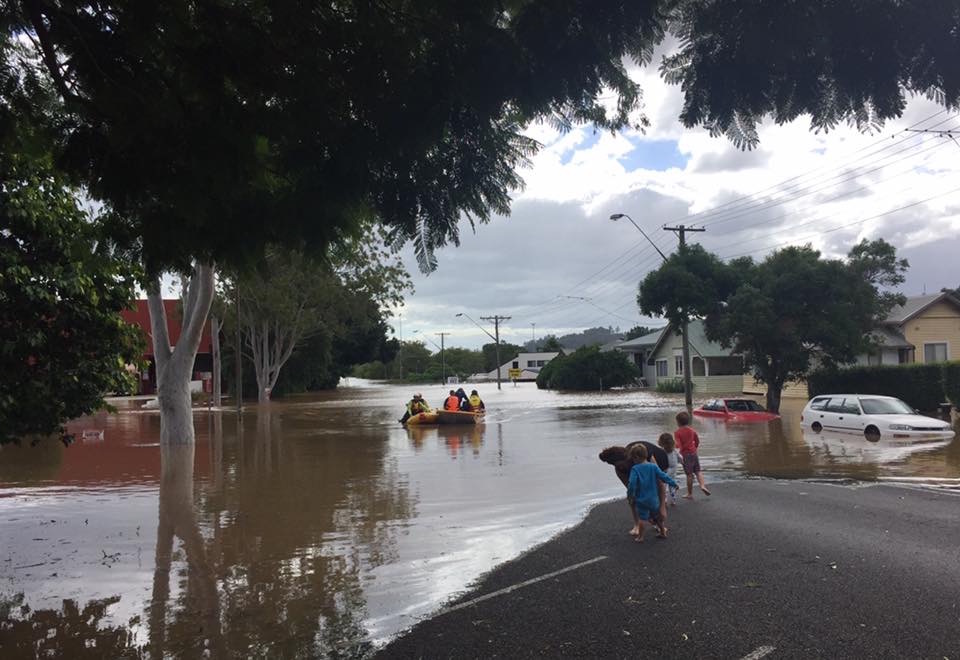 The Helping Hands hub remained the centre for donations of non perishable food, willing hands for heavy lifting and cleaning and teams of skilled people to undertake welfare checks in the most vulnerable people until it closed on April 23.
Our council, including Mayor Isaac Smith, has been magnificent as were the emergency services volunteers who came from far and near to help. Among the volunteers who put their own lives on hold to help others, new leaders merged with the temperament and skills to mobilise teams of people who had never worked together before. In my opinion, those leaders – many of them in their early 20s – will be names to note as community leaders of the future.
Three weeks after the flood, there is still much to be done. Hundreds of residents are not back in their homes and some may never be able to return.  Many people will continue to need material help, many more will require emotional support and fundraising will continue to be required on top of the welcome financial assistance from government.
It is hoped that the Lismore Helping Hands Facebook page will continue with people linking up to help each other not just in relation to this flood event but for the future.
Volunteers can only do so much and it would be ideal to see an existing larger organisation take on the coordinating role of overseeing the wellbeing of flood-affected people into the longer term. Volunteers will still be needed to contribute a few hours or a day when they can but I think that the overarching coordination requires a paid project officer with the structure of a larger organisation to provide the framework. We cannot let the aftermath of the flood result in a loss of community cohesiveness or wellbeing. That would be an indictment on all of us and a tragedy that we must avoid.

A chance remark, and Robert Drewe was off on a hunt for mondegreens – not, as you might think, a new Byron Bay super-vegetable,…