As a brumby lover – and owner – Beate Sommer believes that the brumby is an Australian icon and should be protected.

When I heard on the news that the government plans to reduce the Kosciuszko Brumbies (Australian wild horses) from 6000 to 600 over the next 20 years I was seriously alarmed.

Being an animal lover in general and a horse lover in particular, having spent time with Mustangs (American wild horses) and being aware of the conflicts surrounding their management in the US, as well as owning two Australian Brumbies I thought I knew where I stood on the Brumby issue. Of course I was going to sign the petition against the government’s Draft Wild Horse Management Plan.

Memories came back of the horror of the arial shooting of Brumbies in 2000, which left so many of them injured and needlessly suffering to death. Over the past 10 years I’ve noticed more Brumbies in my travels. Brumbies have been culled via passive trapping and many people – though still not enough – have chosen to adopt one or more, including myself.

Brumbies are fabulous horses. They are strong and healthy and make wonderful companions suitable to just about any discipline be it trailriding, pony club or equine therapy. Brumbies are sensitive, intelligent, have a superb memory and are highly trainable. In my experience the bond you can create with a Brumby is deep and special. My two Brumbies are part of my four-legged healing team. 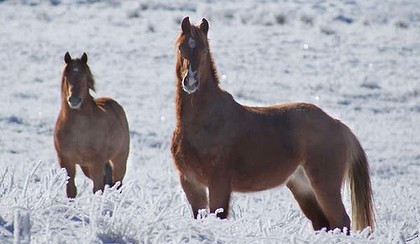 I can easily think of a multitude of reasons why the Australian Brumby should be protected and I am appalled at the hypocrisy of a government claiming the wild horses are causing serious environmental damage when it is the same people who support open cut mining and coal seam gas which are without a doubt a much greater threat to the environment than Brumbies will ever be.

However, even though I am for the Brumby I don’t necessarily want to write against the proposed Draft Wild Horse Management Plan. There has been a lot of overly-dramatic comments on Facebook and it occurred to me one day how many of the people complaining had  actually read all 52 pages of the plan? When I started reading it I thought there were some points that made sense.

So now the camps are divided. You’re either for or against and discussions can get quite heated. I was part of such a discussion not long ago and came face to face with a woman who spoke in favour of decimating the entire Brumby population. She took an extreme view but she also said: ”We only hear what we want to hear,” and Somehow I couldn’t argue with that. I think that is quite an accurate observation of most of us and I immediately gathered that it is all the more reason to listen to one another. If we listen to each other we can fill in the gaps and get the full story, and what it means to us. What I didn’t hear may be what you did hear. What I heard could be useful to you in making an informed decision. It is not necessary to agree. It could be just one small piece of information that widens our horizon.

Instead of insisting on a narrow point of view (a point of view that doesn’t allow other opinions is necessarily always narrow because it doesn’t have the full picture) and ending in argument, judgment, self-righteous insistence and conflict, could we possibly soften our approach to curious interest and decide that sometimes we just don’t know what makes another person tick? 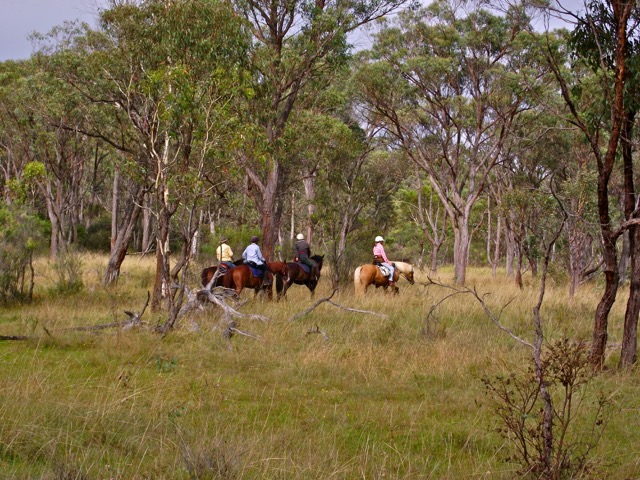 Beate Sommer out on a bush ride on her 12 year old Palomino Brumby Buffalo.

Everyone has something valuable and unique to offer. We can help each other bring out this uniqueness. Everyone wants to be heard. When we truly listen (instead of already formulating in our minds a response) we might discover that all the voices we hear on the outside already exist on the inside. Whatever I refuse to listen to in you I also refuse to listen to in myself.

The Brumby population will be managed in some shape or form. I think an intelligent approach to the issue is required and we need to listen to each other even when we hear things we don’t want to hear. Listen first. Look at all sides, all arguments. Gather your information. Breathe, don’t react – respond.

Respond in a way you are most likely to be heard.

All sides need to work together on this for the sake of the Brumbies!

I have been living near Tenterfield in New England, just over the Great Dividing Range, for five weeks now. Even though it is much colder than at the coast, I am finding the country here spectacular and inviting – inviting to stillness, adventure, new growth and a few more Brumbies.

All of us from TAKETIME2SMELLTHEHORSES (previously located near Bangalow) are gently landing at our growing new sanctuary “Riversong’.

We are surrounded by both National Park and wide open country suited to short and long rides. Saddle up and Giddy Up from our stables! Reach an isolated and pristine waterfall and waterhole in 1 ½ hours on horseback. There’s even a hitching rail there so be sure to take swimmers, towel and a sandwich for a magical interlude before getting back on the trail home.

Alternatively, spectacular rivers, waterfalls and waterholes can be reached by car in less than three quarters of an hour. Ideal for bush walking, rock hopping, skinny dipping (if that’s your thing) and yummy picnics. Or just quietness and solitude shared with kangaroos, wallabies, birds and a koala if you’re lucky.

Here are some links to get more information on the Brumbies:

Says Lismore-based photographer Alex Clarke of our Shot of the Week: “We in the northern rivers are blessed with a beautiful environment, clean air,…