This year the Byron Bay Film Festival celebrates one of the nation’s greatest artists, with the film The King Sun; John Olsen at 85, writes Digby Hildreth.  The BBFF and Verandah Magazine are offering a free double pass to the film, which also includes two other fascinating documentaries on Garry Shead and local artist Scott Trevelyan.  Simply post a comment on the FB link below the story, or on our Verandah Magazine FB page to be in the runnning to win a free double pass to the films which will be showing on Sunday, March 8.

‘An aged man is but a paltry thing,
A tattered coat upon a stick, unless
Soul clap its hands and sing, and louder sing.’

The years and many illnesses (a stroke, a double-bypass and two knee replacements) have taken their toll on John Olsen’s body.

The revered Australian artist borrows from Yeats to colourfully describe old age as “a crooked back upon a stick” in The King Sun; John Olsen at 85, a colourful and inspiring cinematic tribute to his talent, creative drive and courage, and one of several enriching films about artists showing at the Byron Bay Film Festival.

Olsen continues, misremembering Yeats’s poem but conveying its gist: “The soul must sing, and louder sing.” And it’s his singing soul that shines through this stunning film, which is a record of his work on the second largest painting he has created – a 6m x 8m mural called The King Sun, his salute to the brilliant, life-giving orb. 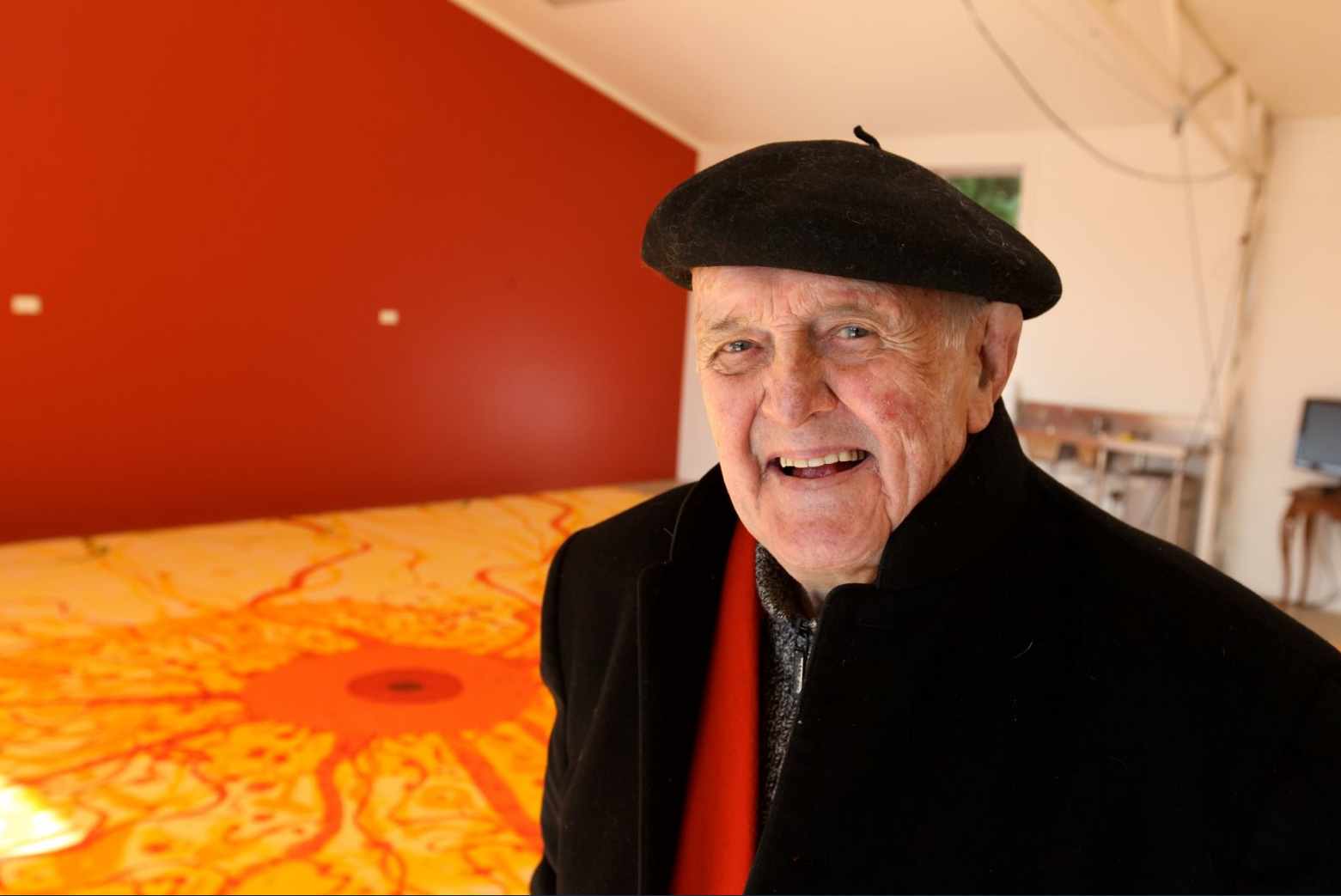 Olsen’s aged mottled face becomes boyish, radiating his joy in this outrageously ambitious work as he sweeps brushes across the surface of eight huge panels on the floor or bangs the paint down on them, forcing it to do his bidding. But while the singing spirit was willing, the flesh was weak. He had to be supported through much of it and he became exhausted and collapsed, though still laughing, joking about “swinging by” the mural in the ambulance to put his signature onto it before it’s too late.

Filmmakers Tony Williams and Anna Hewgill’s 54-minute documentary captures each day’s progress, starting with the arrival of the huge blank panels to the empty studio. There are interviews with Olsen’s son, Tim, with his old friend Barry Humphries and others, and Olsen himself shares his philosophy of life, reflecting on mortality, the creative process and the sun itself. 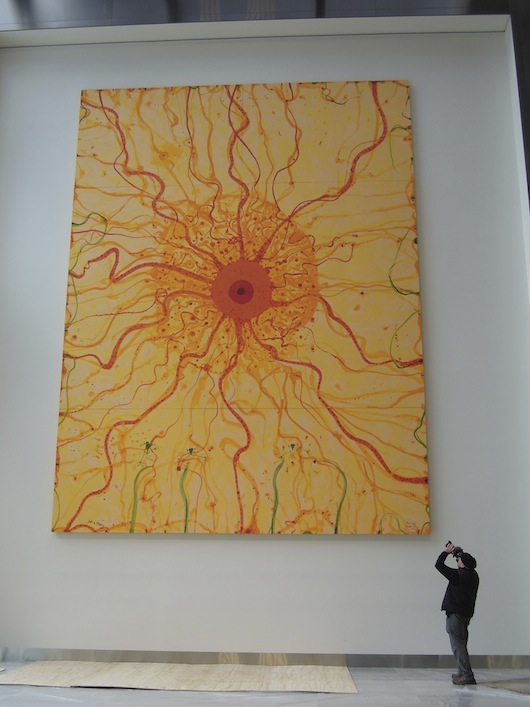 The King Sun now graces the foyer wall of a Docklands high rise building, bringing cheer to all those who enter – as does this film, which is as joyful, energising and uplifting as the man himself.

Garry Shead’s carefully premeditated work is very different to Olsen’s.  This idiosyncratic documentary, In the Steps of Lawrence, takes us on a very different trip – starting in New Guinea, where Shead first came across a book of letters by D.H. Lawrence and became fascinated by the man, his beliefs and, above all, his time in Australia, when he wrote Kangaroo. Shead found out all he could about the British author, and embarked on a series of paintings focussing on Lawrence’s sojourn at Thirroul with his wife Freda in 1922. 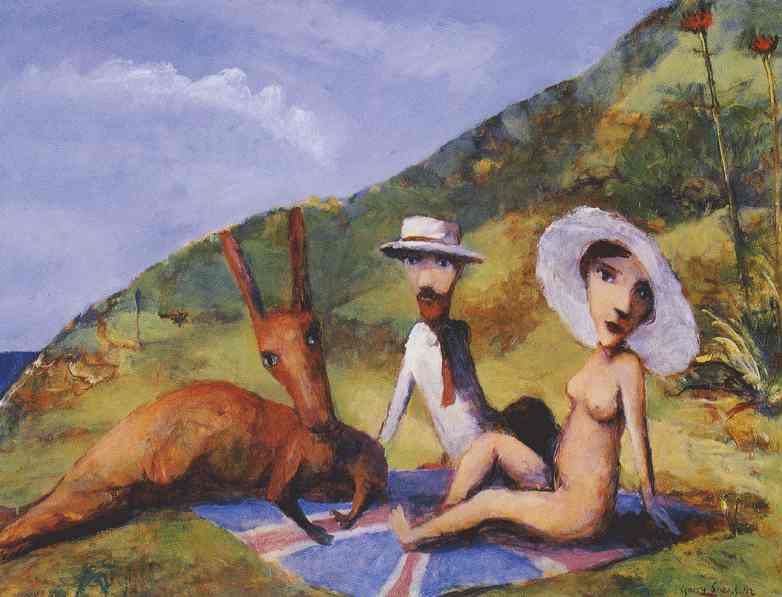 The series, painted in the 90s, starts on the ship that brought the couple over: Lawrence wanted to flee a Europe devastated by war (he foresaw the second rise of Germany, and World War II) and without any real motive, ended up in Australia.

There is a sexy and fantastical quality about the vibrant, colourful paintings, which feature exaggerated figures of Lawrence and his wife seeming to fly, the ubiquitous kangaroo sitting in various postures, or inter-acting with a mythological, even God-like authority. Narrated by Jack Thomspon, In the Steps of Lawrence reveals Lawrence’s fascination with the landscape, the classless society and, weirdly, Australia’s ‘Secret Army’, a bunch of volunteers, many of them ex-Diggers. It’s still a controversial thesis, but Shead believes that Lawrence met many members of this anti-communist militia, including its charismatic leader Rosenthal, the Kangaroo himself.

Through historical footage, mock re-enactments, interviews and close-ups of this fabulous series, In the Steps of Lawrence tells us a lot about the painter, about Shead as an artist, and about Australia.

North Coast artist Scott Trevelyan works on a smaller scale, but with the same focus and purposefulness, and a most unorthodox style, collaborating  as he does with bees (yes, bees!) to create beautiful nature-infused prints. The festival film The Man Who Works With Bees is an absorbing documentary about Trevelyan and his unique methods. 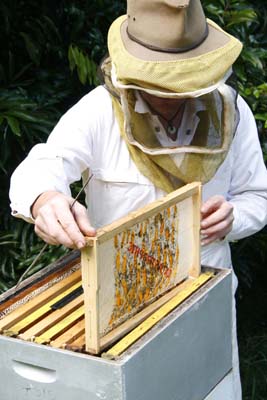 Scott Trevelyan in action with one of his ‘hive’ art works. 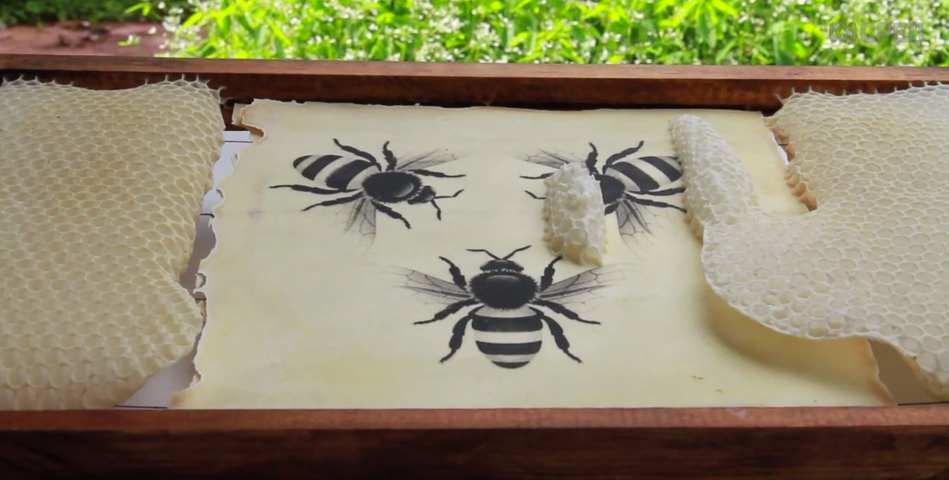 After creating an image through a process known as ‘relief print-making’, Trevelyan secures it to a wire frame and inserts it into the bee hives, then uses the honecomb they create in the final artwork. It’s random, he never knows what to expect, and he is always surprised by the result.  Trevelyan has been a bee-keeper for 20 years – as long as he’s been an artist – but the avian collaboration is more recent, following a severe motorcycle accident in 2002 which left him with a brain injury.

It took him a year to learn to walk again and as part of his recovery, Trevelyan found that both his art practice and the calming bees were highly therapeutic – the combination of the two providing him with a new way to practice art, and in which to see the world.  “I found the repetitive nature of printmaking very cathartic and almost meditative,” he says.  Trevelyan runs regular workshops for people with ABI (Acquired Brain Injury) at his Willowbank Sutdio in Alstonvale, not far from Lismore. ( scott-trevelyan.com)

The Byron Bay Film Festival runs from March 6-15, with screenings in Byron Bay, Ballina, Lismore and Murwillumbah. Program and ticket sales available from Monday, February 23 at venues and www.bbff.com.au

Candida Baker travelled to Carnarvon Gorge in Queensland’s Central Highlands and discovered a hidden world, full of beauty. Let’s get it out of…