Christine Porter’s poignant exhibition, ‘Shadowing Tom’, opens on February 25 at Inverell Art Gallery. Porter charts the extraordinary story of her journey following the work of one of Australia’s best-known painters.

‘Shadowing Tom’ is a major body of work for this Lismore-based artist.  The paintings are about the shed at ‘Newstead’ near Inverell, where Tom Roberts painted his iconic painting: ‘The Golden Fleece’. Porter worked for two years creating paintings, a suite of ten drypoint etchings (engravings on perspex) and a series of mixed media wall sculptures.

It’s sometime in the nineties. I’m on the New England Tablelands of New South Wales. I’ve been on the road for several hours now and my mind is in that sort of driving trance where I’m noticing the world, but not giving it all my attention. I clock advertising signs and property names, buildings, sheep, cattle: elements of the ever-changing beauty that is this part of regional NSW. It’s one of the things I enjoy about my career as a full time artist: a career that has taken me from Tasmania to Mt Isa, much of it along roads like this.

Some say mine is a traditional art practice, but it’s about ideas too. I tell visual stories of rural Australia, specializing in the sheep and wool industries. I make artwork about that iconic Australian building: the shearing shed, whose slow disappearance from the landscape maps the decline of wool’s importance to general Australia.

That day, back in ‘96, I’m not even completely aware of reading the property sign saying “Newstead”. But my mind, of it’s own volition, connects it with Tom Roberts’ famous painting Shearing at “Newstead”, also called The Golden Fleece.

Over the years, although other details of that trip fade, I remember the sign, and return to the idea of it often. I imagine adding that shed to the growing list of shearing sheds I’ve painted. For years I couldn’t even be sure the sign I’d seen at a glance was the same as Tom Roberts’ shed: there are lots of properties called “Newstead”. It would be years before I found out it was, and years more again before I would pluck up the courage to make the tentative calls to find out if a painting project was an option.

2 Plucking up the courage – how many artists does it take to make a phone call?

I’d painted my first shearing shed in 1984. By 2013 my practice had evolved to the point where I’d been invited to sheep and cattle stations all over rural Australia as their own personal artist-in-residence. I spend time on the property, with the resulting paintings and etchings exhibited within the family, then shown later to a broader audience. It’s a very personal and satisfying way to share my work.

I had paid attention to career steps too, in that time. I had a university degree in visual arts and travelled to the UK on an art Fellowship. I had two etchings in the National Gallery, won lots of prizes and painted some of the iconic sheds of Queensland: “Isis Downs”, “Barcaldine Downs”, “Umbercollie”.

Overlaying this was an intense happiness with the subject that had become the mainstay of my practice. Things were going along nicely, but the next shed on my list would feel more important than any I’d ever painted before.

In summer 2013 I’d been in the Inverell area and had been offered an exhibition at the gallery there. Wanting local sheds to be part of this show, the time seemed right to consider that bucket list of all bucket list items: the shed at ‘Newstead’. I was nervous about making the first call. Mostly people contact me to organize a project. I wasn’t completely sure that I had the experience to do it justice, nor how I’d be received. 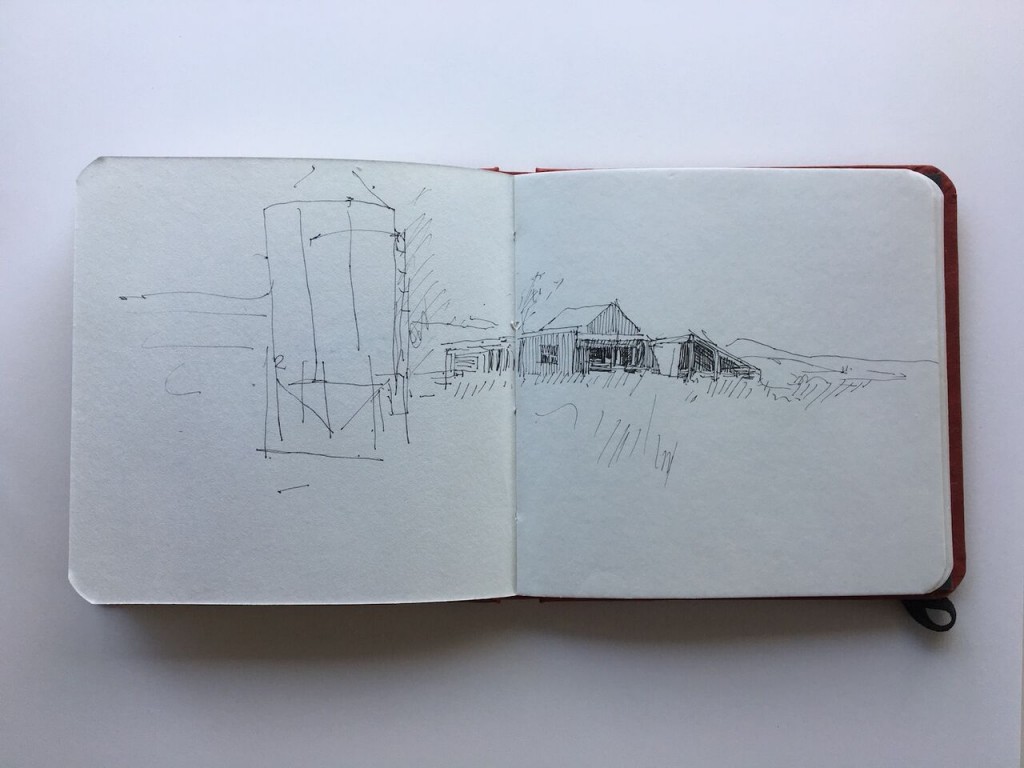 Finally I was given special permission to visit.
I spent several days late 2014 drawing on site at both the original shed – that of Tom Roberts’ fame – and the “newer” shed which is still more than 100 years old. I did prep drawings for what would result in 30 watercolour paintings of both sheds – a major body of work. Such was the significance of this place that for those few day I was very aware of the shadow of Tom Roberts reaching me from 120 years ago.

It felt weird painting there. I was constantly reminded about how much the shed had changed since his time: “It doesn’t look like that now” I heard myself muttering. Drawing the shed as it was, I was re-seeing his shed. But neither could I un-see what he’d shown us already. Already this project was more than just a simple visual discussion. I needed more information. 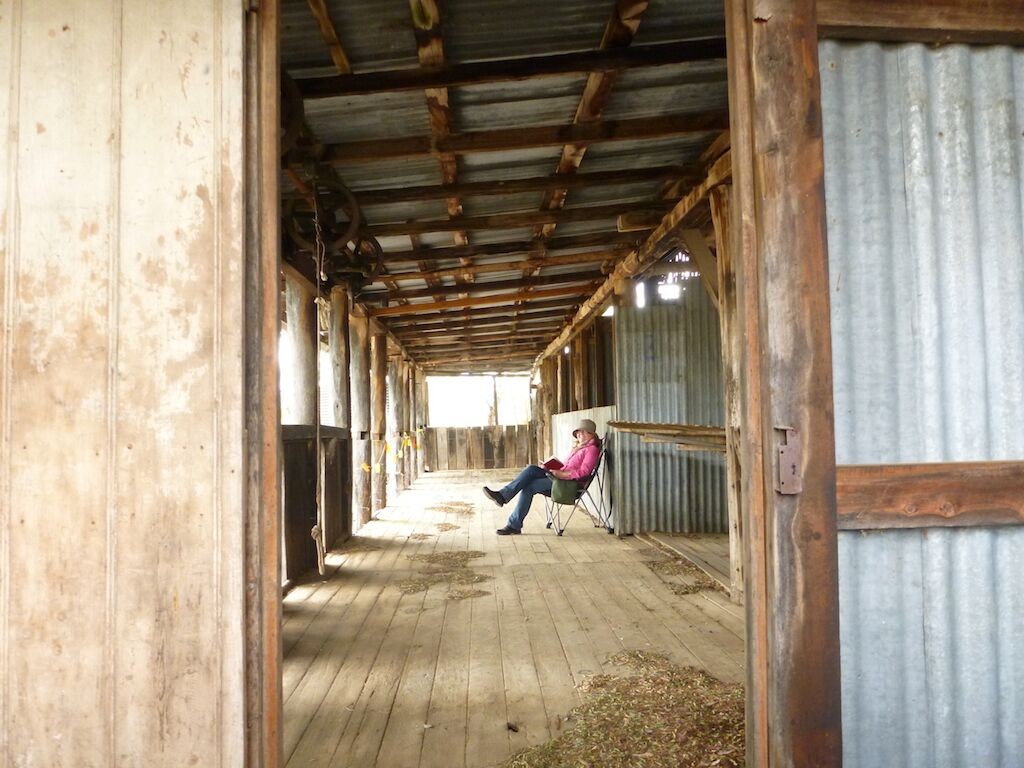 The Golden Fleece is on permanent exhibition at the New South Wales Art Gallery in Sydney. I made a special visit. I read every book in the library about him, and searched the internet. I discovered archives, references and other people’s writing. Then came the most exciting opportunity.

With forms filled out, and my heart in my mouth, I was given access to Tom Roberts’ actual sketchbooks at the State Library of NSW. I sat in the special collections section, behind the glass wall, at the back of the main reading room of the Mitchell Library, looking at sixteen small working sketchbooks, thumb-printed and dirty from use. It was an astonishingly personal experience to be able to handle these small books that could have been created last year, rather than a century ago. It was as if the artist himself was sitting next to me in that hallowed space, telling me about the dust and excitement of the sheep yards and his plans for paintings I knew he’d completed.

I’d found the man behind the masterpiece.

I travelled to Canberra to see The National Gallery’s blockbuster exhibition January 2016, and saw his work in other major collections there. Shadowing Tom began to feel a lot like stalking Tom, but the more I learnt the more my fascination grew. 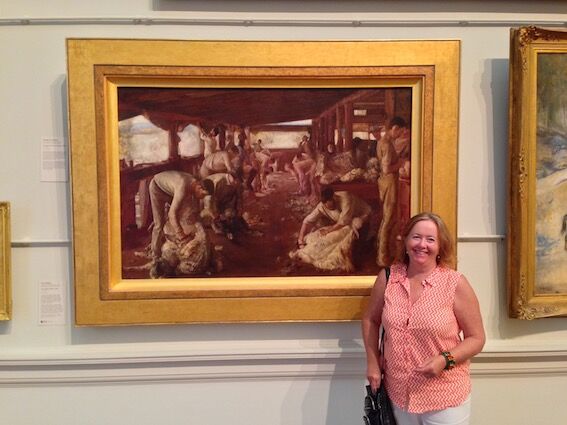 Christine Porter in front of The Golden Fleece by Tom Roberts at the Art Gallery of New South Wales.

5 In my own studio – the finished paintings

Over a six month period in 2015 and ‘16 I settled down to make paintings. Using the prep sketches and notes I’d made on site, as well as some photographic references, I developed the paintings of both shearing sheds. This part of the project is typical of the work I do. I make artwork about what a shed looks like from the outside in full sunlight, as well as interiors where the patterns of light are created by skylights and doorways. These paintings are all watercolour on paper, from 15cm square to much larger works.

I was happy with the results, but I wanted to tell the other story too – about how it felt to visit “Newstead” – making artwork that so closely shadowed Tom Robert’s iconic painting.

6 Shadow boxes and printing them

I’d recently learnt how to make boxes from Perspex. These new skills gave me a chance to eplore some of the ideas that were developing about my visit.

I chose ten images from my sketchbook that I scratched, dremmelled and sandblasted onto small Perspex sheets, creating areas that were transparent, translucent and opaque. I then constructed boxes with the Perspex drawings as the face: on the back wall of the box I placed a postcard of The Golden Fleece. The audience literally had to look through my drawings to see his image.

My drawings changed the way the postcard version of his painting could be seen, just as his painting impacted on what I saw, 120 years after he’d been there.

Before I made the boxes I printed from the engraved surfaces, creating a small edition of each of the ten images. In this exhibition they’ll be installed with the parent work, but they’ve already been exhibited in their own right. These artworks represent how we’re distant from the Tom Roberts version of sheep and shearing, and even of making art – and with each year becoming even more distant. Eventually the image of The Golden Fleece will become completely meaningless to most people, it’s symbols already losing relevance for so many Australians. 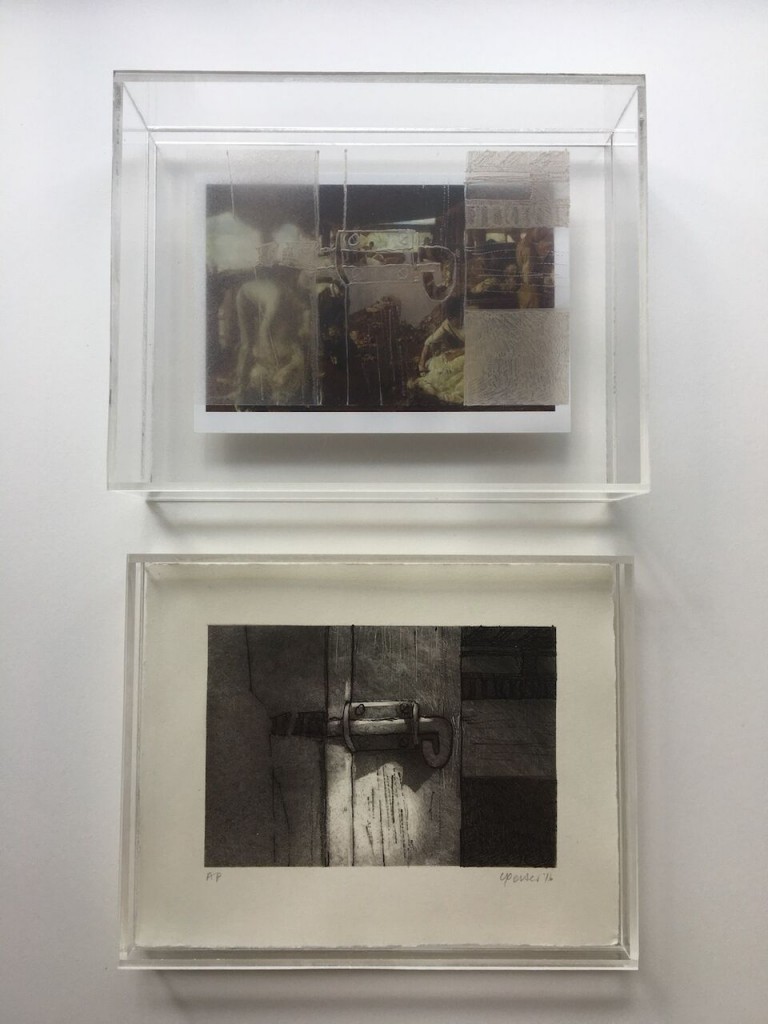 7 The exhibition – installing a journey

As I write, in the steamy heat of a northern rivers summer, it’s late 2016. This body of work, now entitled “Shadowing Tom” is in the final stages of preparation for its exhibition in Inverell, in February and March 2017.

If art is about telling a story then this is a story of a journey with many layers. It’s not just the story of a shed, on a hill, with a past. It’s not just the story of two years researching and making artwork about this site, nor is it just about the germ of an idea that took twenty years to be realized. Perhaps it’s the journey of a governess on a cattle station near Charters Towers painting her first shearing shed in 1984, then thirty years later sitting in one of the most famous shearing sheds in the history of Australian art, wondering how she got there.

More than likely it’s the journey of that artist and her art practice honouring the legacy of an unintentional mentor and exploring the implications of making artwork under the shadow of his iconic vision: celebrating the growth of her own creative voice, influenced by her mentor but not eclipsed by him.