I’m no psychoanalyst, but what’s behind the impulse that makes some people think: “Gosh, I badly need to go to the toilet. But hold on a minute, I’d better take a marker pen with me.” It’s puzzling.

We’re talking public toilets, of course, and the longstanding human need to write crude or pornographic messages on their walls and doors. Furthermore, in order to further express one’s righteous anger at the world’s unfairness, what a good idea it would be to tear the toilet seat off its hinges and block the system with toilet rolls.

Has there ever been a public lavatory that hasn’t been the subject of toilet rage? So why does this anger exist? You’d think if the perpetrators really hated that necessary amenity, they’d be in and out of there pretty smartly.

Toilet wit and imagination are another thing, however. Being fortunate enough to have this column as a creative outlet, I’ve never felt the need to write personal messages to unknown future toilet visitors, or draw exaggerated genitalia for the creative appreciation of forthcoming patrons. 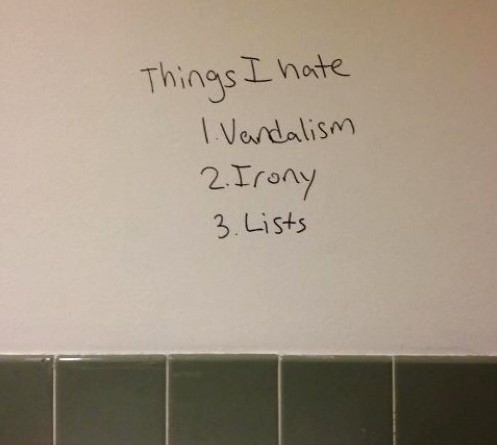 But many people obviously have this deeply felt want, and always have, as I was reminded by Professor Mary Beard’s SBS program, Meet The Romans. When Pompeii was consumed by the eruption of Mount Vesuvius in 79 AD, and frozen in time, many buildings were so well preserved that archaeologists – and tourists — today can still read the graffiti and see the phalluses and acts of congress the Romans scrawled everywhere on their lavatory walls.

Any of these examples remind you of a 21st century public-toilet wall? Only the cleanest ones have been selected here. (Those Romans!)

“Phileros is a eunuch.” (Written by an enemy?)

“The man I am having dinner with is a barbarian.” (An unhappy date?)

“To the one defecating here, beware of the curse. If you look down on this curse, may you have an angry Jupiter for an enemy.” (Goodness knows.)

“Floronius, privileged soldier of the 7th Legion, was here last night. Only six women came to know him, too few for such a stallion.” (Definitely written by Floronius.)

“Virgula to Tertius again — You are a nasty boy.” (Probably her that time.)

“Virgula to Tertius — You got me pregnant.” (Definitely her that time.) 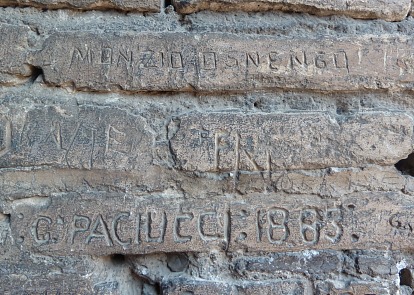 Unsurprisingly, the wittiest graffiti is usually found in university toilets. Such perpetrators like to air their recent lectures in philosophy (Nietzsche crops up a lot), have time on their hands, strong opinions — and a ready supply of marker pens. People committed to a political candidate may write propaganda on a loo wall. (Swastikas and peace symbols are equally popular.) Football fans may also cheer on their teams in this manner.

As in Roman times, of course, many people want to publicise negative facts about others. A dumped lover may advertise the fact that “Darren has herpes”. What better place to announce it than in the recognized public square for all matters crude and disgusting.

Meanwhile, as the old idea of a romantic lad carving his and his girlfriend’s name on the bark of a tree has faded with the forests, statements of love these days (“Lachlan 4 Ruby 4 Ever”) are likely to be found in a high school toilet stall.

“Don’t date a guy unless he buys you stuff.” (Sage advice in the local surf club’s Ladies’ loo.)

“My girlfriend follows me everywhere.”

In my lifetime, the everyday word for the particular convenience has changed from lavatory, to toilet, to loo. Delicate American sensibilities prefer “going to the bathroom” (where, oddly, there’s no bath) or “the restroom” (which, strangely, contains nowhere to relax). Other twee expressions include “the little girls’ room” where one goes to “powder your nose”.

If someone asks to use “the WC” (for water closet), they’re probably from yesteryear. “Loo” originated in Britain, where “lavatory” is also preferred over “toilet” by well-bred types, some of whom might also ask to “use the facilities”.

Not my grandmother: she chose instead to “spend a penny”. But I doubt she took a pen with her.

Robert Drewe’s most recent books The Local Wildlife and Swimming to the Moon are on sale here: penguin.com.au.local-wildlife

For the first time ever Jerry Sargeant is bringing his amazing Star Magic workshops to Australia for one amazing weekend at Nerang, on Queensland’s…