To be honest, I’m not sure how Mandy Nolan finds time to do everything she does. She’s had three books out in less than two years; she makes regular comedy appearances around the country; she writes for the Byron Shire Echo, and she keeps a clean and tidy house.

I know this last for a fact from visiting her to interview her about her last book, Boyfriends We’ve All Had (But Shouldn’t Have), but it’s handy information to have whilst reviewing her latest comedic memoir, Home Truths, because Nolan’s line from her childhood home to the light and airy Mullumbimby house where she lives with her husband and more than several children, has been anything but straight.

In fact it’s hard to imagine that the young woman in a squalid shared house in Brisbane where they didn’t train the cat to use the kitty litter because it was ‘too much trouble’, where people drank until dawn, and slept where they fell, is the same house-proud somewhat OCD Mumma Bear juggling multiple careers that Nolan has blossomed into over the years.

One wonderful recollection of the shared house was their attitude to locking it up – they didn’t. But coming home one night from a Nick Cave concert, they found a male intruder leaving the house…The stranger wasn’t remotely apologetic. Instead he looked at the bunch of mismatched punk, new romantic and swampy girls and snarled, “You don’t even have tea.’ He was right.’ 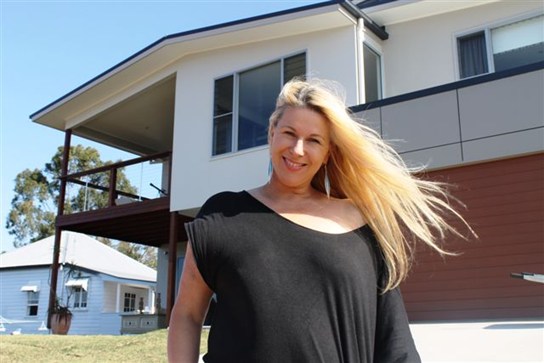 The book follows the trajectory of homes Nolan has known from childhood to now, shattering a few misty-eyed myths along the way. The idea, for instance, that we think fondly (mostly) of where we grew up, is given short shrift by Nolan, who lambasts the little Queensland town of Wondai, and in her frank and forthright fashion labels it simply a ‘shithole’, although, in the kindest sentence she has towards where she grew up she adds: Sure it’s a shithole. But it’s my shithole. (When Nolan wrote her first anti-Wondai piece she was bombarded with angry letters, emails and facebook comments. You should be ashammed of yourself, wrote one woman. Nolan, of course, couldn’t help herself, she wrote back correcting her critic’s spelling.)

But Wondai, in a sense, did lay the foundation for this book, because according to Nolan it was responsible for leaving her with a very specific syndrome – The Fear of Missing Out on Living Somewhere Better. It’s that sense of endless questing for ‘home’ whatever it means, which raises the book from simply a funny memoir to a philosophical look at what ‘home’ means to all of us, as the place that helps form our personalities and behaviours – for better or worse – and the kinds of homes we grow out of, and into, during our lives.

Not unnaturally a lot of the book is devoted to the house she lives in now, which was purpose-built, and took over three years to complete. The process allows Nolan to be at her rampant best as she writes about the endless frustrations of building – and the strange obsessions of a home-builder. Taps, for instance, cornices and decks all get a good workout. 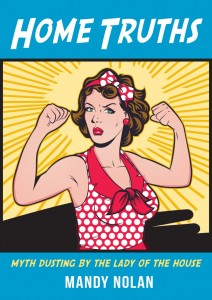 There’s a great chapter on what Nolan calls ‘Feng Shite’ – and I’ll leave you to work out Nolan’s position on that particular philosophy yourself.  It’s almost impossible when reading this book, not to give a (wry) smile of acknowledgement at the familiar family topics she covers. Pet ownership and houses, for instance – the differences between cats and dogs, the sadness of losing pets, the happiness of getting new ones and whether pets should be ‘inside’ or ‘outside’ pets is familiar territory to many of us, as is much else in the book, including a long treatise on the Single Sock Syndrome – a subject which has mystified those in charge of the family washing for decades.

Sensibly perhaps, Nolan doesn’t take many digs at her adopted hometown of Mullumbimby. (After all this is the town that tried to fight off an invading Woolworths grocery store with a T-shirt that said ‘It’s Ground Zero all over again’, so I personally wouldn’t want to be on the wrong side of Mullumbytes, as they’re affectionately known.) And the most moving part – in the emotional rather than the locomotive sense – of the book is Nolan’s description of how she came to realise that this area of the Northern Rivers was ‘home’ to her, and that home is quite definitely where the heart is.

Nolan, as usual, strikes a delicate between outright rudeness, a light-comic touch and a broad humanitarian take on the domestic issues that affect us all. And as we know, there’s no place like emoh ruo.