An all-star cast of artists from across the planet blasted in the New Year at the 2016 Falls Music & Arts Festival under heatwave conditions, writes Georgina Bible.

The mercury soared as fans wilted under scorching blue skies across the three-day music and arts program. Punters attempted to keep the oppressive heat at bay with regular visits to the on-site Palm Springs Water Park, which was packed to capacity across the weekend. Nonetheless, the sold-out event saw 22, 500 patrons attending over the three days of the festival.

Festival Director, Brandon Saul, said organisers worked hard to help fans deal with the harsh conditions.  “With the hot weather, many of our patrons took advantage of the regular shuttle buses to close by beaches to cool off during the day,” Saul said. “For those who chose to stay on site throughout the day we put a lot of effort into keeping people cool and hydrated – the magnificent twelve pool water park was once again a huge hit… We had free water refill stations, roving volunteers with back pack water sprayers and we handed out water and sunblock at the main stage,” he added.

Punters huddled under a lonely tree in zero breeze conditions to catch early Valley Stage acts that included Northeast Party House and Mallrat. One fan defiantly made his way out to the front of the stage but was soon beaten back by the heat.

Enter retro dance masters, Client Liaison. By now a cloud had mercifully drifted over North Byron Parklands, shielding the amphitheatre for part of their set. The group opened with Canberra Won’t Be Calling Tonight followed by an assortment of classics, including Pretty Lovers and Feed The Rhythm, with even an old Savage Garden cover thrown in. 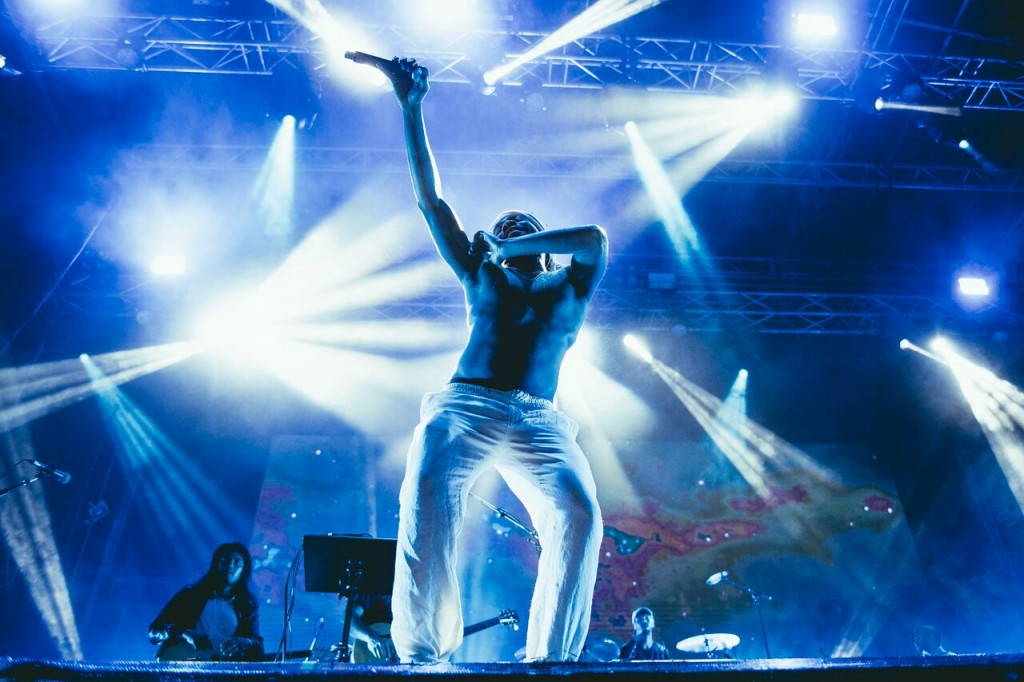 The sun mercifully went down in time for the legendary Grandmaster Flash to take over the Valley Stage. His set opened with a video that outlined how he had honed his art after discovering turntables in the seventies. Highlights included a salute to the late George Michael with Faith, as well as The Jacksons’ Blame It On The Boogie. Fans were sent straight to hip hop heaven when the Grandmaster closed his set with The Message.

Headliner Childish Gambino AKA Donald Glover hit the Valley Stage after the annual 10-second countdown to midnight and didn’t disappoint the now fading audience. Gambino held the amphitheatre in his hands as he soared through favourites from Camp and Because The Internet, as well as standouts from new album Awaken, My Love! – a perfect start to start the New Year.

The sun continued its scorched earth policy into Sunday as patrons foraged for opportunities to stay cool. There were winding queues to enter the Palm Springs Water Park and for the buses promising delivery to Byron Bay.

As one of Australia’s most respected acts and unparalleled masters of atmosphere, The Jezebels were a welcome return to the festival circuit. Frontwoman, Heather Shannon, had been receiving treatment for ovarian cancer, which had kept the group out of the spotlight. Fans enjoyed a mix of new and old classics from the Sydney group. Tracks like Pleasure Drive from their new album Synthia were well received, as were the eternal hits like Endless Summer and The Look Of Love. 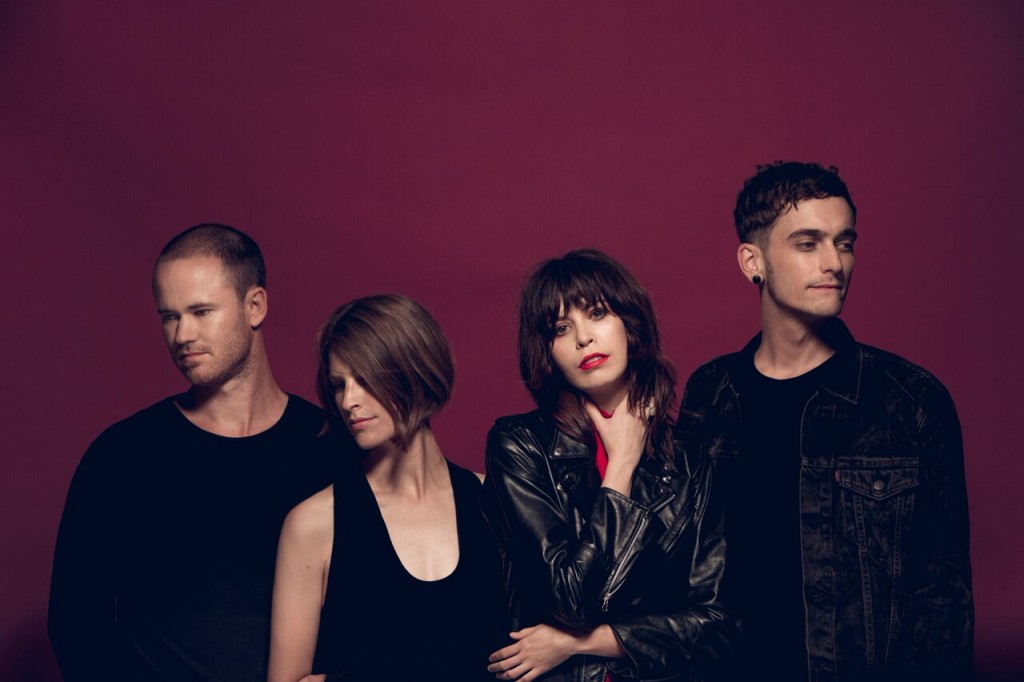 Part of the Australian contingent – The Jezabels.

Enter low-fi psych rock Perth exports, Pond. Nick Allbrook and company had stepped-up to fill the headlining spot left by Grouplove’s exit from the line-up due to medical reasons. And it was a good thing they did. Pond were easily the stand-out performance of the festival. Allbright is a magnetic performer with ‘moves’ that suggest he could be the love child of James Brown. The small crowd that had the sense to gather at the Valley Stage were rewarded with an auditory freak-out featuring classics like Don’t Look At The Sun Or You’ll Go Blind and Waiting Around For Grace.

Conversely, the amphitheatre was later packed to capacity for Violent Soho, widely recognised as one of Australia’s best live bands. Fans had flooded front of stage to catch the festival legends race through a volley of hits that included Love Is A Heavy Word, Viceroy and Like Soda. The all-time festival favourite, Covered In Chrome, elicited singing from the audience that could probably be heard back in their hometown, Brisbane.

Next-up – The Avalanches, perhaps one of the most anticipated acts of the festival. The headliners were subject to mixed reviews for their Splendour in the Grass slot back in July. But this was to be a triumphant return for the Australian mega stars. What followed was a barrage of electro-pop brilliance that included tracks like last year’s comeback hit Frankie Sinatra, Subway and the eternal classic Frontier Psychiatrist, an appropriate end to a mind-blowing set.

By Monday, most punters were sporting various shades of sunburn and exhaustion, though relief soon set in with the arrival of a light breeze accompanied with dappled cloud cover.

Sydney trio, DMA’s, packed the Forest Stage early. It was during their set that dark clouds assembled on the horizon which would soon deliver a violent downpour that no umbrella or poncho could defend. But any thought of the approaching storm faded away as the trio ripped through hits like Too Soon and Timeless. 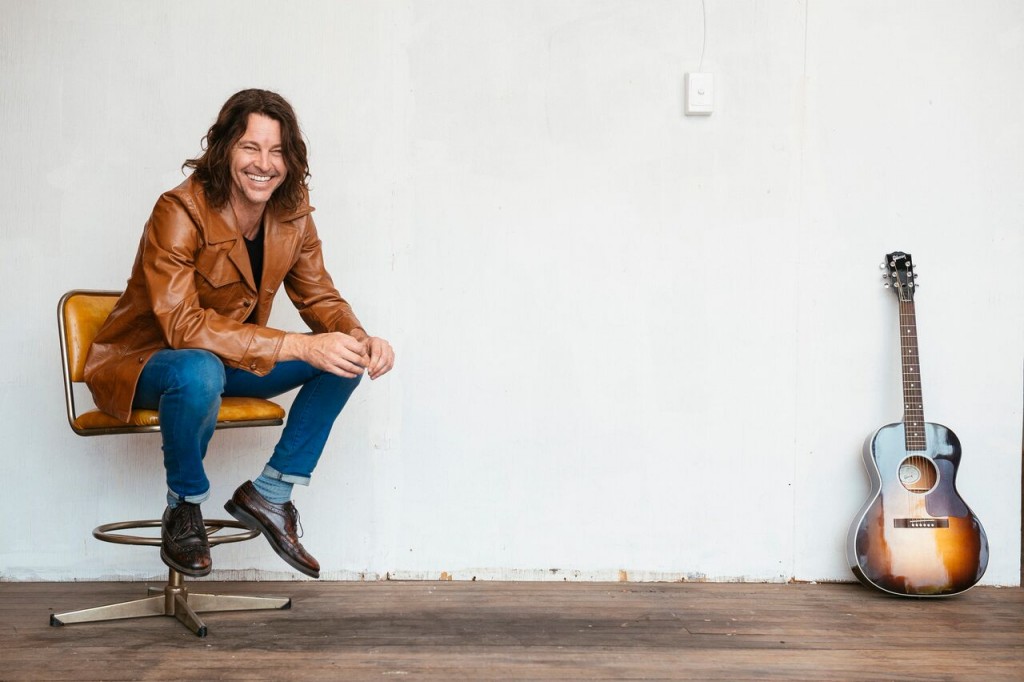 As if on cue, gentle rain began to fall as Australia’s unofficial poet laureate, Bernard Fanning, took over the amphitheatre. Fanning and band produced a set mixed with his solo work and firm Powderfinger favourites. Tracks like Which Way Home and Wish You Well delivered fans into festival heaven while a giant version of These Days melted into a tribute to Prince, with a gorgeous cover of Purple Rain.

And rain it did. Sideways in fact. There were rumours the violent torrent would put an end to proceedings, with the deluge hitting the Valley Stage from all sides. But the show went on, with London Grammar vocalist, Hannah Reid, giving punters a reason for hanging around in the trench warfare conditions. Reid gave a spell-binding performance, spinning a roll-call of the UK trio’s classics like Nightcall and Flickers, as well as a taste of the new release, Rooting For You.

Happily, the Byron event was virtually incident-free, apart from the ‘rite of passage’ traffic jam on leaving that saw some campers not hitting the road until 11.30am. Festival Director, Brandon Saul, noted that both staff and fans contributed to the success of the Byron leg of Falls.

“A huge amount of effort went into creating this festival and we would like to thank all the staff, service personnel and the army of over five hundred volunteers,” said Saul. “The festival patrons themselves should also be congratulated – everyone commented on how friendly, polite and cooperative the patrons were and that it made this year’s Falls Music and Arts Festival Byron a great experience,” he added.

In the hills behind Byron Bay, the beautiful Villa Rustica is the perfect place for artistic workshops, and next weekend Turiya Bruce is running…