Lennox Head photographer Natalie Grono, has been an East Coast girl all her life.  2015 has been a big year for Grono, who won the Olive Cotton Award for Photographic Portraiture last week at the Tweed Regional Gallery, and earlier this year the National Photographic Portrait Prize People’s Choice Award, writes Candida Baker.

Grono, who was born and grew up on the Central Coast, gathers her inspiration directly from the world around her – the beach and ocean, the wilderness and bush, and the extraordinary tribe of people that inhabit the Northern Rivers, where she now lives.  “Wild landscapes are integral to my being,” says the 38-year-old photographer.  “I always loved exploring, and I think from an early age I could find beauty in ordinary everyday things.  If I wasn’t outside exploring, I used to love to read – and I was a huge fan of the Japanese TV series Monkey Magic.” 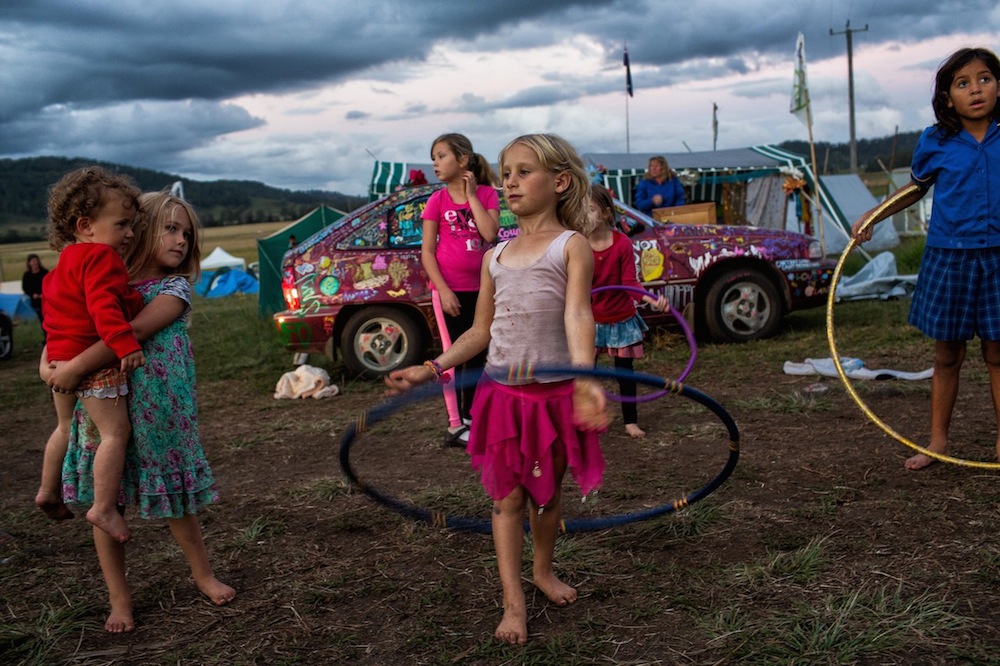 Natalie Grono’s Children of the Tribe was a finalist in the 2014 Australian Life photographic competition.

It’s a connection that makes sense looking at the apparently simple but layered meaning of the winning photograph from the Olive Cotton award, Pandemonium’s Shadow.  The photograph beat 82 finalists from all around Australia to take out the prestigous award, with a $20,000 prize attached, which is named after one of Australia’s best loved leading twentieth century photographers, and features Grono’s daughters Amali (left), and Ava-Luna (with the dress over her head).

In all of Grono’s photography a love of humanity and the world shines out.  “I remember once on my travels I was staying at a remote community and I was given the nick-name ‘the small girl with the big smile’,” she says.  It’s her open-mindeness and deep connection to local community that has seen Grono create such images as Feather and the Goddess Pool (2014) of local Byron Bay resident, Feather, which won Grono the 2015 National Photographic Portrait Prize People’s Choice Award. 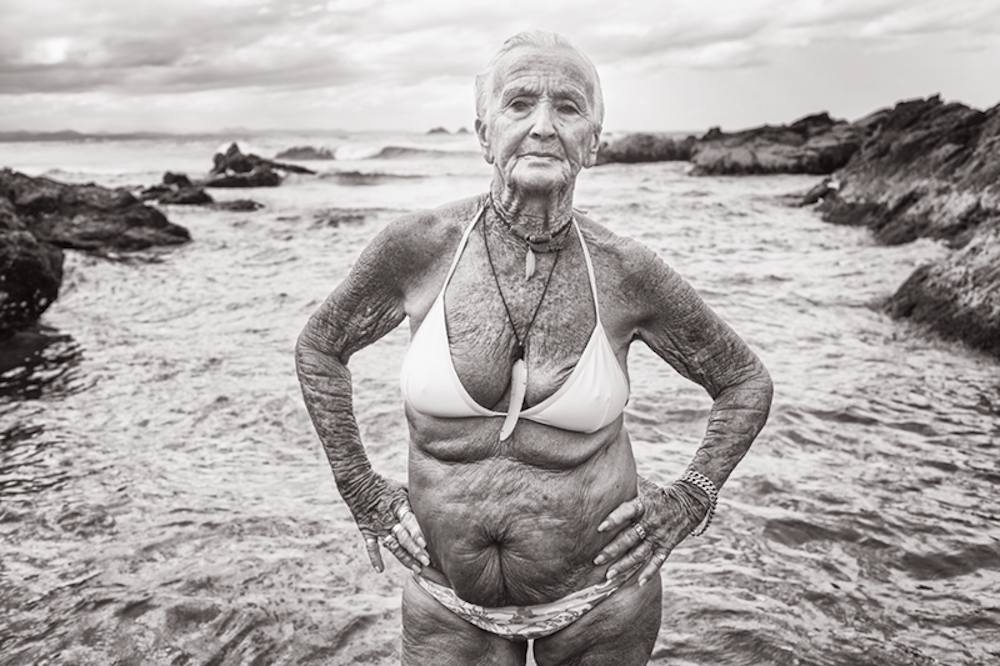 “I was drawn to the fact that Feather, who is in her mid-70s now, is so comfortable in her own skin despite the pressure that is put on women by everybody to be a certain age and type if they’re going to bare their skin at the beach,” she says. “I think the image resonated with people because it invites them to look at a confident older woman is proud of her body and not afraid to show the lines that tell her story.”

Although as a child Grono hadn’t yet identified her desire to be a photographer, when she was studying journalism at University, it quickly became a creative passion, and a way for her to communicate with the world.  During the past 15 years she has honed her skill – bringing a photojournalistic intention to the most lyrical of subjects, and creating playful and mysterious images that work on many levels, reminiscent in some ways of Julia Cameron, and her purposely out-of-focus portraits, that brought an energy and movement into portrait photography for the first time.

A mother to two children, Grono’s favourite personal work is Sea Dreaming, a series she began after the birth of her first daughter.  She photographed the series in the Lennox region, and for her the work conjures memories of her childhood, and the never-ending enchantment of the beach.  But although she loves to photograph her local environment the adventurer in her has taken her to many exotic locations, and perhaps some of her most enigmatic works came from her  journey to Black Rock Desert to photograph of the Burning Man Festival, which produced her series, Rites of Passage. 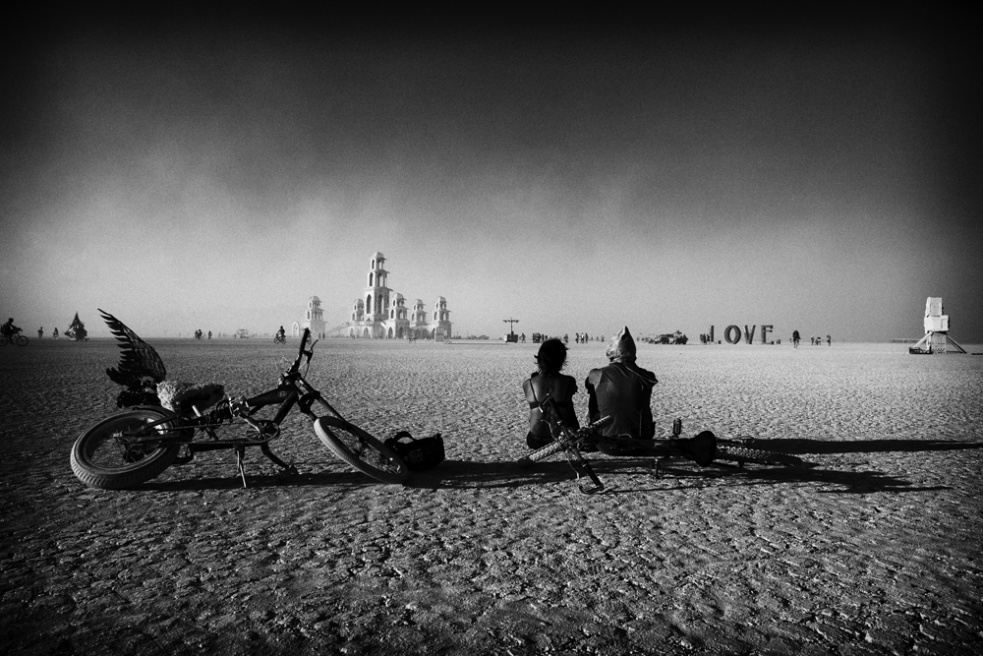 “The Festival sees around 50,000 people all gather in Nevada’s Black Rock Desert to create a temporary city, Black Rock City.  It takes place on an ancient lake bed known as Playa,” says Grono, “and the festival is dedicated to community, art practices, radical self-expression and self-reliance.  A week later, everybody leaves, and the particpants, known as ‘Burners’ leave no trace that they’ve been there.  It’s a really extraordinary experience.”

Grono’s latest series is closer to home than Nevada.  She’s worked on a project entitled the Moon and the Muse, featuring inspirational women of the Northern Rivers. Don’t be surprised if there are many more prizes to come.

The Olive Cotton Award for Photographic Portraiture is on show at the Tweed Regional Gallery until Sunday September 27, 2015: tweed.nsw.gov.au/Exhibitions

You can see more of Natalie Grono’s work on nataliegrono.com

Bangalow resident, author Robert Drewe, who is also, we are proud to say, one of  Verandah Magazine’s regular columinsts, has a nifty turn of…