Robert Drewe finds it’s an uphill battle in the war of letters between ‘aitch’ and ‘haitch’, but he still has spellcheck on his side.

This admission will make me seem a boring pedant, unable and unwilling to see the tide has turned and the numbers are against me. The enemy has scaled the castle walls. Yet I still pronounce the letter H as ‘aitch’.

Battle-scarred though I am, when my youngest daughter entered Byron Bay high school last year I knew I’d have to face the old problem again: new teachers and their pronunciation of that rebellious eighth letter of the alphabet. Worse, of needing to correct my daughter’s pronunciation.

I foresaw all those parent-teacher meetings looming ahead, discussions chock-full of the initials HSC (standing for Higher School Certificate: the final-year exams in NSW). Five years of earnest conversations about “HSC this, and HSC that”. Except the teachers – all aged about 23 — would be saying ‘Haitch SC’ every time, and my brain would fog up with every uttered ‘haitch’.

I’m more confused than ever. My mother’s family was Catholic, and my father’s was Protestant, and every one of them said ‘aitch’. Yet I came out in favour of ‘aitch’ to a well-known playwright, a Catholic-raised atheist, five years ago, and he hasn’t spoken to me since.

According to Sue Butler, editor of the Macquarie Dictionary, “In Australia the ‘haitch’ pronunciation has been linked with Irish Catholics, the Marist Brothers in particular, although no real research has been done into this and it may well be hearsay or at best circumstantial.” 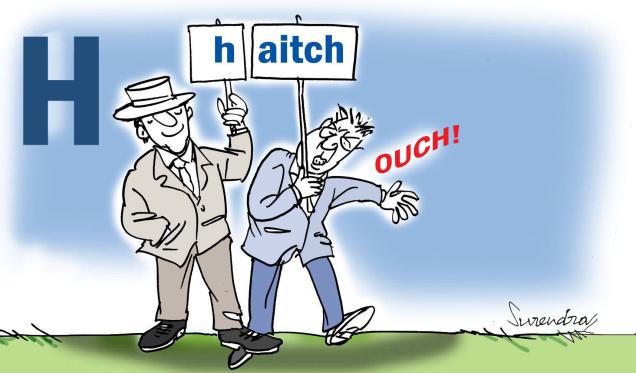 Even those arbiters of English speech, the BBC, the ABC and the British Library, have a quid each way nowadays. Jo Kim, head of the BBC Pronunciation Unit, says, “English dictionaries give ‘aitch’ as the standard pronunciation for the letter H. However, the pronunciation ‘haitch’ is also a legitimate variant.

“We don’t ask broadcasters who naturally say ‘haitch’ to change their pronunciation, but if they ask us we tell them that ‘aitch’ is regarded as the standard pronunciation. People can feel very strongly about this and the ‘aitch’ pronunciation is less likely to attract audience complaints.”

Jo Kim adds that‘haitch’is a standard pronunciation in Irish English “and is increasingly used by native English-speaking people all across the country, irrespective of geographical provenance or social standing. Polls have shown that the uptake of ‘haitch’ by younger native speakers is on the rise.”

The British Library agrees that for people under 35 it’s becoming the favoured pronunciation. According to Jon Herring, the library’s chief linguist, “Language change happens through innovation. Each generation talks slightly differently from the one before. So we hear a ‘pronunciation divide’ between the young and the old with forms like ‘aitch’ and ‘haitch’.

“Children’s first exposure to English is usually through their parents, but once at school, the words and pronunciations they adopt are more influenced by other children they spend all day with. It’s a human thing to adapt to the group in this way.“

Writing for the ABC’s Australian Word Map online, the Macquarie Dictionary’s Sue Butler comes out as a ‘haitch’ defender. “It’s remarkable that we fix on some idiosyncrasies of language as markers of the decline of Western civilisation, while others we are prepared to tolerate as acceptable variations.

“People have fought wars because they felt superior to others. No one has done it yet on the basis of ‘haitch’ but it still remains an unnecessary social divider. You say to-ma-to, I say to-may-to. You say ‘haitch’, I say ‘aitch. Let’s be tolerant of our little differences in language as in everything else.”

Of course, I couldn’t agree more, very sensible. But when I met my daughter’s new English teacher I was on tenterhooks? She was a pleasant young woman but I was ready to sink into the depths of despond. Come on, out with it.

“Even in Year Seven,” she said finally, “we’re looking ahead to the HSC.”

Incidentally, when I was writing this column, every time I typed ‘haitch’ the computer slapped my wrist and underlined it in red. So there.

“My peach-cheeked cherub trying to survive Walt Corporate Disney eating her alive ‘I liked princesses and I turned out fine’ Says the beige, robot…