The environment is very much the star of this year’s 9th annual Byron Bay Film Festival, which runs from March 6-15.  Mick Daley previews Frackman, a compelling documentary on the controversial subject of fracking which has its premiere at the Festival on Saturday March 7 in Byron Bay.

An Australian answer to Gaslands, the North American documentary that first opened the eyes of the world to the terrifying realities of the methane gas industry, Frackman the doco-drama follows the trials of ‘accidental activist’ Dayne Pratzky, the self-styled Frackman.
Denouncing fracking (coal seam gas or CSG mining) as “the biggest environmental issue Australia has ever faced”, Pratzky’s land at Tara in southeast Queensland was engulfed by the industry after a gas company demanded access to his land, and told him he couldn’t refuse.  From a knockabout pig shooter building a home on his block of land, Frackman follows Pratzky’s journey from reluctant to radical activist, travelling the world to take on powerful pro-fracking corporations. Pratzky sets out to expose the long-term dangers of fracking to a mainstream audience and on a series of intrepid commando missions he does so with convincing flair. 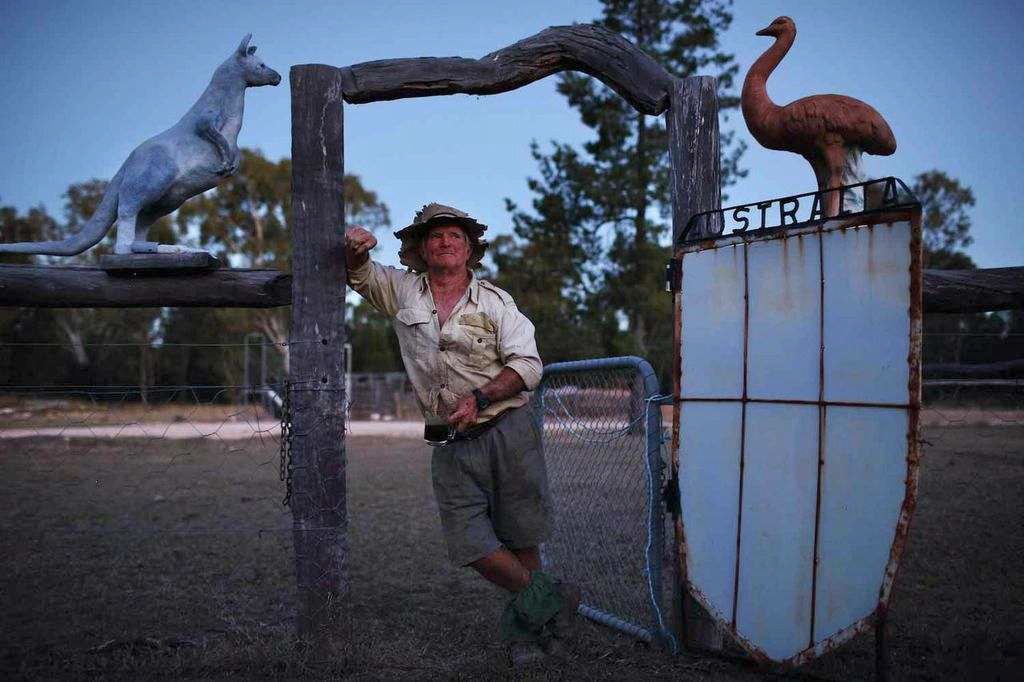 Wayne Dennis has 13 CSG wells on his property. His story is told in Dayne Pratzky’s (The Frackman) compelling environmental film, Frackman, which has its premiere at the Byron Bay Film Festival on Saturday March 7.   Photograph: Andrew Quilty/Oculi

Part Crocodile Dundee, part The Hobbit, the film adopts the tone of a classical heroic saga as The Frackman’s investigations reveal much about this secretive business and the corrupt political machineries in place to preserve it. Pratzky is up against heavy odds, fighting an established industry that has thus far been successfully promoted as an economic and even environmental panacea by such icons as Queensland football legend Darren Lockyer. But he has hyperbole – “it’s the biggest con that has been perpetrated on the Australian people since the asbestos disaster” – a surging, emotive soundtrack and some powerful allies on his side.

On a cross-country odyssey The Frackman moves from mining badlands in Queensland to the Pilliga forest in northwest NSW and to Bentley in the Northern Rivers, where the stirring sight of peaceful Aboriginal warriors uniting with farmers demonstrates the powerful momentum of the growing movement against CSG. They’ve been protesting under the banner of Lock the Gate, the apolitical lobby group whose name itself has become a powerful slogan, uttered with convincing fervour in the film’s bona fide protest scenes, where The Frackman comes into his own as an activist, disrupting CSG mining conferences and being arrested in dramatic scuffles.
Along the way he’s encouraged by Lock the Gate founder Drew Hutton, who counsels farmers on a Ghandian approach, urging ordinary people “to step up and become heroes”. 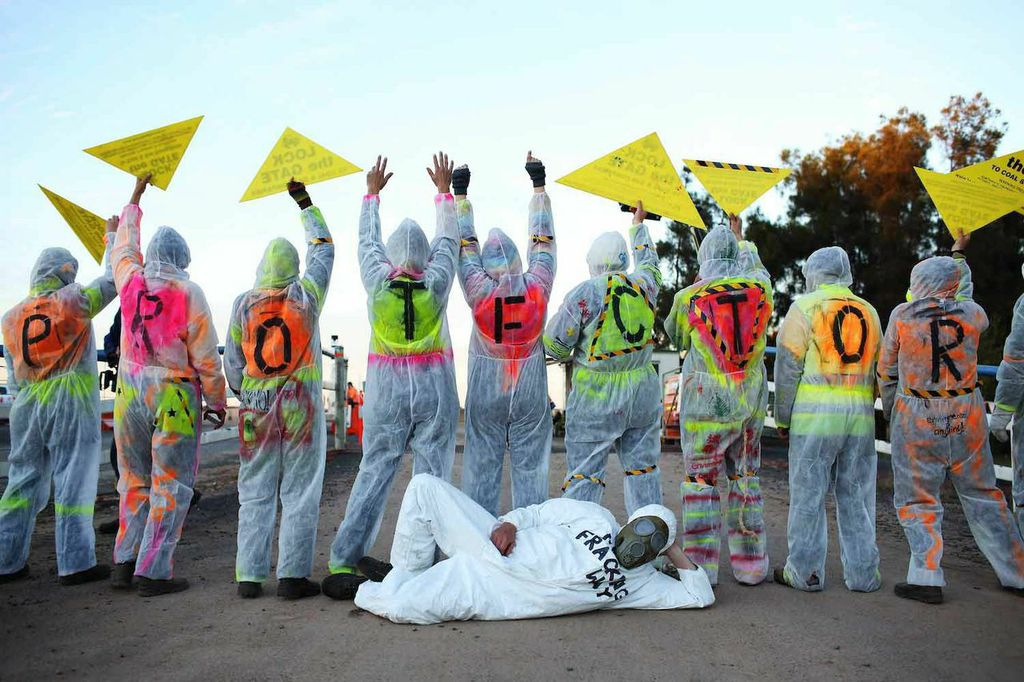 There’s even a visit to the mansion of the bewilderingly powerful radio commentator Alan Jones in his southern NSW estate. Jones, in his best Churchillian soprano, tells Pratzky “You’re a gutsy bloke” and thunders about the CSG pestilence that has destroyed his Queensland hometown. He tells his enormous radio audience with righteous fervour: “The battle is on for our rights and for our country. The enemy is within”.
Jones’ presence in this film will give it some heavy credence in conservative, mainstream Australia, but it’s Pratzky’s personal narrative arc that gives it a gritty, if patchy authenticity. He finds romance, for instance, with a beautiful fellow activist from the USA, where methane mining has already wrought devastation worse than that seen in Gaslands. This relationship is the gold in filmmaker Richard Todd’s story, giving Pratzky’s sometimes somewhat overplayed histrionics a humility that fits beautifully into the elaborate plot.
Frackman is a fast-paced and fluid doco that has plenty of incendiary ingredients readymade.  The effortless indignation of Pratzky’s fellow Tara landowners, victims of corporate mining conspiracies, provide plentiful high pathos and there are solid hints of governmental skulduggery when The Frackman’s plans come unstuck in a cliff-hanger ending. It’s a worthy thriller that may well broaden the already universal appeal of Lock the Gate, whose mantra is creating a credible voice of opposition to a doomsday industrial cult that threatens our very air and water.

Another film in the running for the festival’s Best Environmental Film Award is Maarten van Rouveroy’s Black Ice.  This feature-length documentary captures the first-hand accounts of the infamous Arctic 30 – a group of Greenpeace protesters who attempted to sabotage the world’s first Arctic oil-drilling platform and found themselves the centre of geopolitical controversy.

Black Ice charts the group’s adventure aboard the Greenpeace icebreaker Arctic Sunrise, their protest at the Prirazlomnaya oil platform, arrest, imprisonment and eventual freedom. It provides a behind-the-scenes look at the life and dramatic times aboard the Arctic Sunrise: tense, provocative, inspiring. 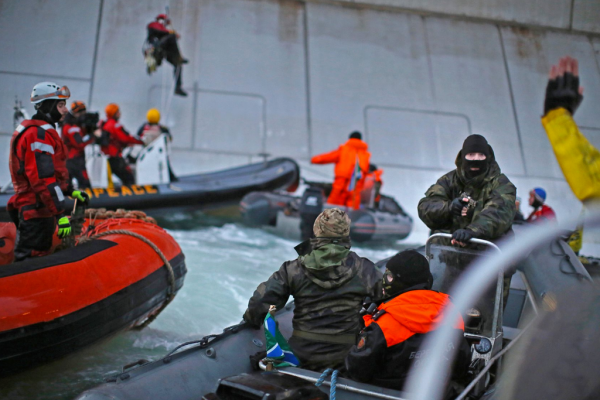 A scene from Black Ice – a day in the life of a Greenpeace warrior on board Arctic sunrise.

There’s uplift, hope and, yes, positivity also in Net Positiva, a short documentary about a trio of young surfers who do something practical about the discarded fishnets that make up 10% of the plastic pollution in the world’s oceans.  The three friends travel to fishing villages in Chile and come up with a fishnet collection and recycling program, converting the fishnets into skateboards, illustrating the impact that the actions of a few can have on the future of many.

Uranium mining is creating havoc for the environment in Australia, where every operating mine has a history of leaks, spills and accidents, and it’s no different in the US. The film Crying Earth Rise Up tells the story of two Lakota women who work to expose the human cost of such mining and its impact on the people and water of the Great Plains. Debra White Plume is a grandmother and tireless leader in the fight to protect her people’s water and land from corporate polluters and is the lead plaintiff in a case challenging uranium mining on Lakota treaty territory. 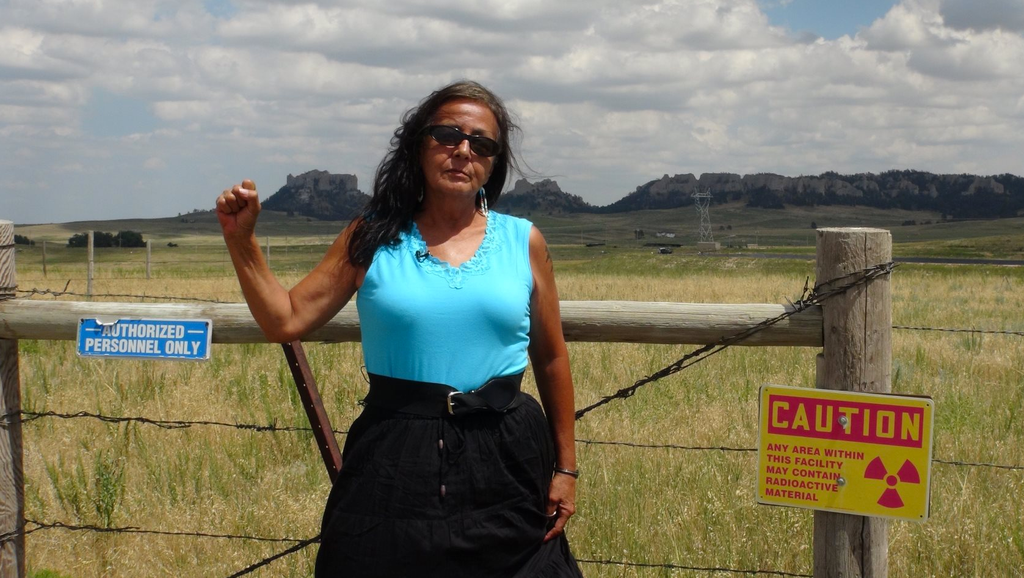 Debra White Plume, grandmother and leader in the fight to protect the local water in Crying Earth Rise Up

Elisha Yellow Thunder knows too well the dangers of contaminated water. She unknowingly drank water with high levels of radiation while pregnant with her first daughter, whose severe medical anomalies are life-threatening. A nearby mining operation is extracting uranium ore from deep in the ground by tapping the aquifer that supplies drinking water to rural communities from South Dakota to Texas. Crying Earth Rise Up follows Debra White Plume as she rallies her community against the operation. But the promise of a much-needed infusion of economic opportunity to the region is seductive, despite the risks, and public opinion could go either way.

The 9th Byron Bay Film Festival runs from March 6-15, with films screening at venues in Byron, Ballina, Lismore and Murwillumbah.  Says festival director J’aimee Skippon-Volke of this year’s offerings.  “We have 220 films of an exceptionally high standard, with something for everybody’s taste.”