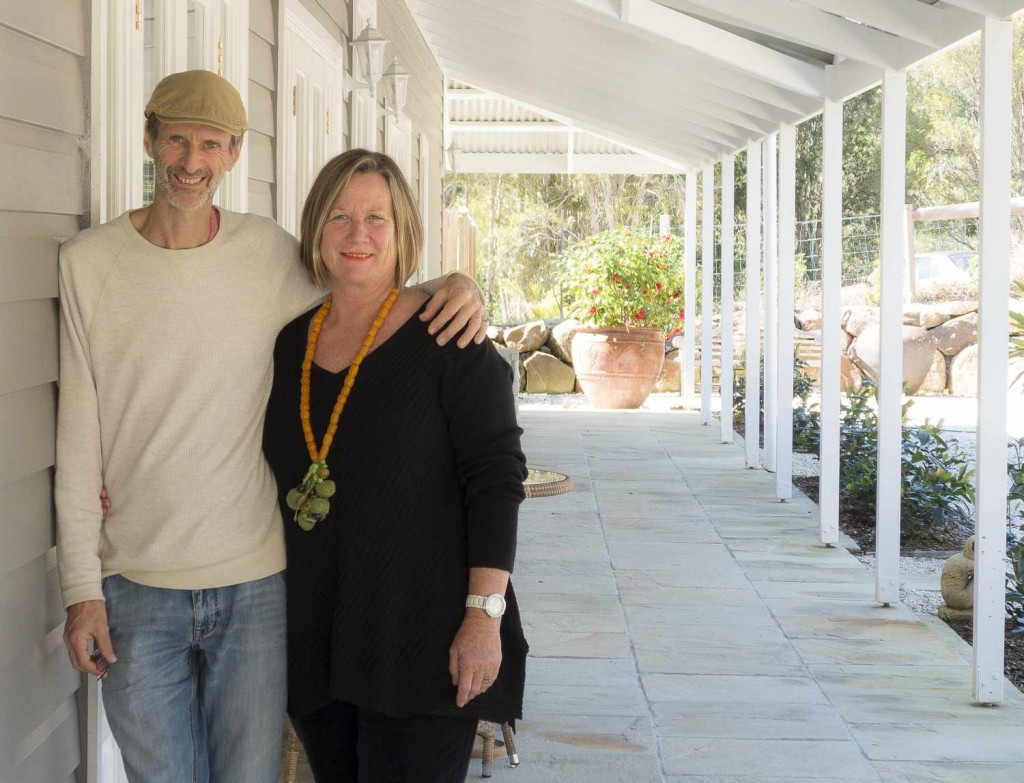 David Young and Kate Platt on the verandah of their beautiful new B&B, Abelia House.

There’s nothing Verandah Magazine likes better than a great verandah, so when we heard that interior design guru Kate Platt and photographer David Young had opened their new five star B&B, Abelia House, just outside Byron Bay, Candida Baker popped down for a sticky beak.

If you’re in the southern end of Byron on any given day, you might very well see a bright lemon-yellow motorized bicycle whizzing down the hill towards the café on the corner of the cemetery road, or perhaps more importantly, as photographer David Young, the bike’s owner points out: “Whizzing back up the hill.”

It’s a form of transport that suits Young’s latest lifestyle well, since he and his wife, interior desiger Kate Platt, finished their latest project – the beautifully appointed, newly-built Abelia House, both their home and a stylish bed and breakfast, just a few kilometres from Byron. “But most of those kilometres are downhill,” says Young, “which means inevitably you’ve got uphill on the way home. I didn’t want to add to my carbon footprint by taking the car up and down, so that’s why I invested in the bike.”

The house, which sits in two acres of garden, is in a community title where no domestic pets are allowed, and each residence has plenty of space around it. The result is the feeling of a gated park – and somewhat unusually for this area, with its macadamia-covered hills – a true sense of the bush, the beautiful soft green-greys of the surrounding eucalypts contrasting with Platt’s pride and joy – her garden, which even in winter is a riot of a colour. 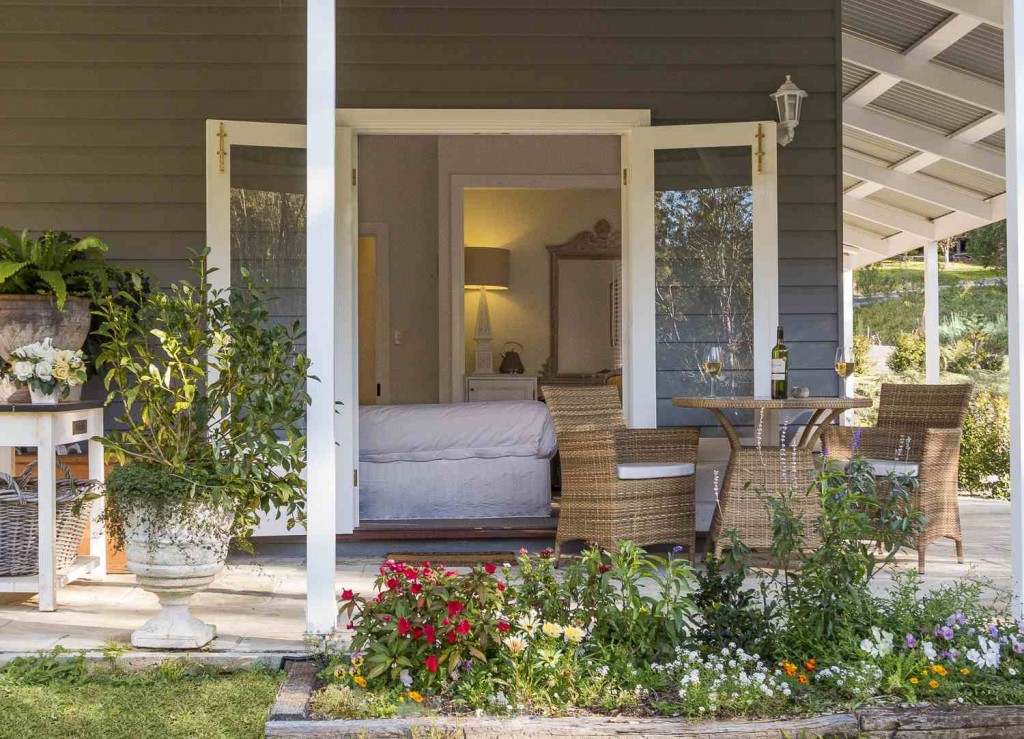 Colour, of course, for those that might remember Platt’s name from her days as a fashion designer in Sydney, is Platt’s trademark. Originally a graduate from the National Art School (where their 22-year-old son Myles is now studying), Platt was one of the first designers to embrace a funky shop in Paddington’s Oxford Street in Sydney, where her angular patterns where embraced by the Sydney glitterati. And not just Sydney either – when Platt moved up to Byron in 1988 she was sending her prints and fashions around the world from her own factory in North Richmond and she employed around 30 people.

“I moved up to the Byron Bay area because I had a six-month old baby,” she says, “and I really wanted a less hectic lifestyle.” She bought herself a 120-year-old cottage in the hinterland village of Eureka and set about renovating it – applying her love of design to her new home. “It really gave me a taste for designing,” she says. “I started by doing simple things, designing bathroom renovations. Then someone asked me to design a house in town, and gradually this new career was born, which I loved, and still love.”

In the meantime Young was on his own career trajectory as a highly-paid advertising photographer in Sydney, but facing personal and emotional burn-out, he too decided to take the trip north, landing in Byron Bay in 1991. “I’d been living up here for about six months when I met Kate,” he says. “By then Isaac, her son, was three, and not long after I met her I moved into her house at Eureka, and we went on to have our son Myles.” 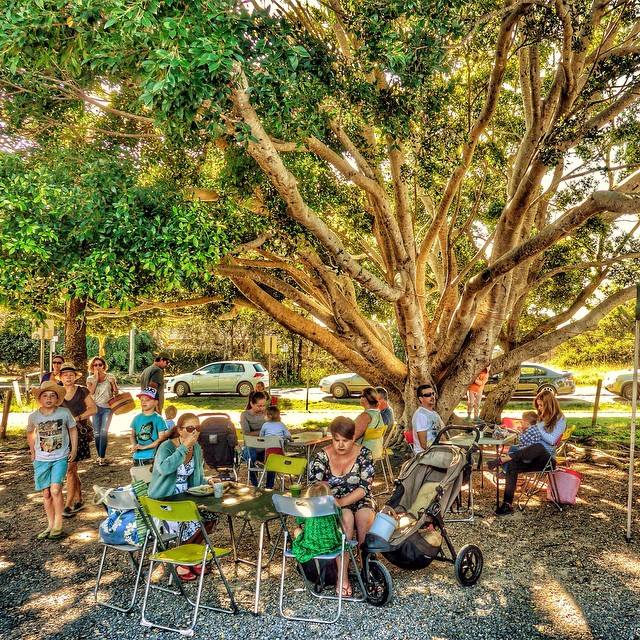 Creativity with an iPhone – coffee break at the Byron Markets. Photo: David Young

Doing up the house at Eureka had ignited Platt’s flair for house-design, and soon Platt had clients lining up for her services. “I started doing simple things, designing bathroom renovations and small jobs, then a couple asked me design a house for them in town, and I really enjoyed doing that,” she says.

The career turn allowed the couple to take on a new project of their own – having sold the house in Eureka (to singer Pete Murray), Platt focussed her energies on their massive Tuscan-style property in Ewingsdale, ‘Auaucaria’, which also functioned as a B&B. “It was an interesting journey,” she says, “because we’d intended it would be our superannuation, but we hadn’t really planned on what it would be like having such a huge house once the kids had left home. We were really rattling around in it, and that’s when we decided we’d like to down-size and also live closer to town.”

Running several businesses seems to be almost essential in this area, and the combination of using their beautiful new home with its gracious wrap-around verandah as a B&B with their respective careers as designer and photographer works well, says Young. “We play to our strengths,” he says. “I do all the IT work on the site, make sure we’re on the right places, Kate monitors everything and does the breakfasts – she decides if she’ll put the flower here or there!”

Being close to town has also given Young a surprising new angle to his photography – his amazing iPhoneography. “The iPhone is an amazing tool,” he says. “I’ve really experienced a resurgence of immediate creativity – just being able to have it in my pocket, and recording just what I see in front of me without having to take a heavy camera with me gives you great liberty to move around.” Aided and abetted of course, by his bright yellow bike.